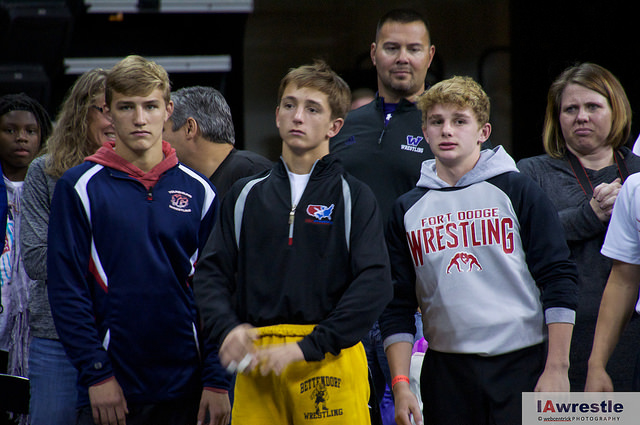 Another big-time addition for the Hawkeye program, as they not only add Lisbon three-time state champion Carter Happel, but Bettendorf’s two-time state champion Jack Wanger has also announced that he too is head to Iowa City next year. Wagner has competed at 106 and 113 for the Bulldogs the last two seasons and is expected to compete at 120 pound this season. He projects as a 125 pound recruit for the Hawkeyes, and selected them over Minnesota and Nebraska.

“I went on my visit and I still was weighing out Iowa and Nebraska pretty hard. I knew that those two programs were going to be it for me. I came home from my visit and talked to my coach Nick Trizzino…it just clicked with me. I am an Iowa kid and I wrestle an Iowa style. It fits me and I fit the program.”

Just this past weekend on the 15th, Wagner competed at IA Wrestle’s first ever event, the Night of Conflict where he faced off against nationally ranked Jason Renteria of Oak Park River Forest. Now looking back with retrospect we can call that a meeting between two future teammates (Renteria has committed for the class of 2017), with Renteria coming out on top.

“One of my goals this year was to come out on top in the Night of Conflict against one of my solid competitors, but I didn’t. Going into my senior year I want to make a statement, stay humble, work hard, and hopefully get my third state title, win all my tournaments and matches this year. Then go into the summer confident in my freestyle and go into a little more competition this summer.”

On going from a rivalry with Renteria to teammates, “Renteria and I have nothing but respect for each other. He is going to be a great teammate, great competitor, and partner in the room. That’s one of the main reasons I choose Iowa. There is no lack of partners and anyone you pick out on a day is going to make you better.”

Wagner joins a few of his former high school teammates on the Hawkeye squad with Paul Glynn and Jacob Woodard entering the program this year, and both Logan and Connor Ryan are expected to compete for starting spots this season at 141 and 149 pounds. The 2016 Hawkeye recruiting class now features an abundance of middle weight recruits – Alex Marinelli, Kaleb Young, Matt Malcom, Tristan Johnson, and Cade Brownlee – and Happel and Wagner provide the lightweight fire power for this class. Wagner also informed me that he intends to compete a part of the HWC for Junior, University National, and in the future as a Senior level competitor.

“I just want to let all the Hawk fans know that I am ready to go and ready to be a Hawkeye. I am going to do the best I can to keep that tradition carrying on through my time there. Hopefully wrestle Iowa style and get some big wins in Carver Hawkeye Arena.”

On who Wagner would like to thank for getting him to this point, “My dad being there 100% and weighing the pros and cons of everything and getting me into the sport at a young age. Coach Dan Knight, who’s had me in the Bettendorf program ever since I was little. Mark and Nick Trizzino for pushing me along the way. I can’t thank those guys enough they have been four key guys in my decision and my wrestling career.”