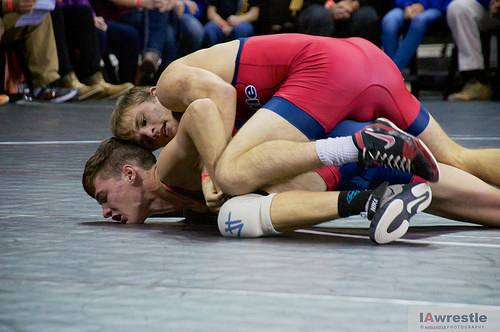 The Hawkeyes continue to bolster their 2016 recruiting class as they land nationally ranked senior to be Carter Happel of Lisbon. Happel is currently a three-time state champion for the Lisbon Lions which puts him in a club with his father Dean, who won three titles back in the 1980s, and current Hawkeye assistant coach Ryan Morningstar, who won his three titles in the early to mid-2000s. Happel picked the Hawkeyes over in-state Northern Iowa.

Happel said this on his decision to join the Hawkeyes, “I have always wanted to be coached by Morningstar, it’s been one of my dreams. I remember when he went to Wisconsin for that year I was telling my parents I wanted to go there because of him. I have a good relationship with him and the Brands, I have been practicing there for two years now (Eastern Iowa Wrestling Club trains at Carver), I just feel like that’s the place for me to be. It’s a good wrestling community.”

Just this past weekend on the 15th, Happel competed at IA Wrestle’s first ever event, the Night of Conflict where he faced off against nationally ranked Jarrett Degen of Montana and Micky Phillippi of Pennsylvania.

Happel opened his 2014-15 season at 132 pounds, but bumped midseason to wrestle 138 at the state championships. Happel picked up his 100th and 150th career win this past year, with win #150 coming in his team’s first trip to the state duals. He also broke Lisbon’s single season record for takedowns.

He also is a very accomplished freestyle wrestler, winning a Fargo national title as a freshman, and then winning a FILA Cadet national title last May in Akron, Ohio which earned him a spot on the World Team at 58 kg and an opportunity to wrestle in the Czech Republic at the Cadet World Championships. In July, Happel was one of two non-graduating wrestlers to place at the Fargo national championships, bringing home 5th at the tournament.

On his goals for his final high school season, “Get that job done, that fourth state title in February. That’s the main goal right now and after that we’ll get back into freestyle. I am definitely going to go to Fargo again.” Happel even added that he won’t be headed to just try and win a freestyle title, he plans to wrestle Greco this summer too, “My parents want me to do both styles out there and I have never really had a love for Greco and I don’t really like it, but I have never done it at Fargo so we’ll see when the time comes. I might do both styles.”

The Lisbon wrestler is currently ranked 4th in the nation at 138 pounds by Flowrestling, but he is the #30 ranked wrestler in the 2016 class according to InterMat. Happel projects to wrestle 141 pounds for the Hawkeyes and he joins a recruiting class that already features two top 100 recruits – #3 Alex Marinelli (160) and #32 Kaleb Young (160) – and recent verbals Matt Malcom and Tristan Johnson, which makes Iowa off to one of the strongest starts for top recruiting class.

“I’d like to thank my parents for being there for me when I need to talk to them about making the decision, and thank the Hawks for wanting me. (The recruiting process) has been a fun experience.It was a tough decision, but now that it’s over with and I made my mind up I’m excited for next year.”