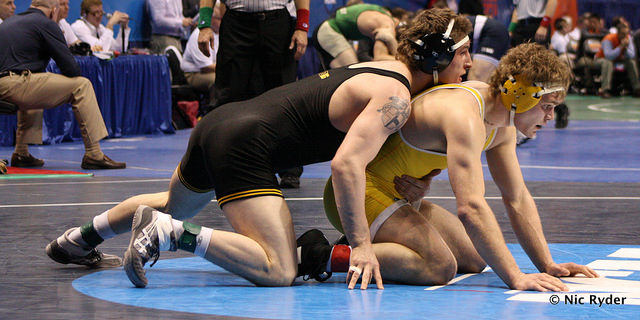 This officially wraps up the Division I previews for IA Wrestle. You can go back and look at yesterday’s 125-157 post, as well as the ISU (part I and part II) and UNI (part I and part II). The Hawkeyes are expected to have a strong team for 2015-16 and we would love to hear your thoughts. Shoot me a tweet at  @RossIAWrestle and let me know your thoughts on the Hawkeye lineup. Did I leave anyone out? Did I downplay any particular wrestler? Did I hit the nail on the head? Let me know, now on to the preview!

It’s hard to judge what the Hawkeyes should expect out of Paddock in the coming season, and mainly that is because he spent the entire redshirt season competing at 174 where he had mixed results. Paddock is the only big time recruit that Iowa has that can step into this weight, and spending last year at 174 truly has fans wondering what they exactly have.

While Nick Moore never made the stand as an All-American, he was one of Iowa’s top dual performers for the last three seasons at this weight. Burke has a good pedigree with two of his brothers wrestling Division I, and his father also wrestled in college. Burke is also a big time Greco standout, and he was a University National finalist in the style this summer.

Backing him up or challenging him for the spot will probably be Thomsen or Rhoads, whoever doesn’t win the 157 spot. Cooper is too small to come up so if Thomsen wins the 157 spot, in all likelihood Rhoads would be the only one coming up. Both wrestlers spot started at 165 last year, and both took losses to eventual All-Americans. Paddock will definitely have a size advantage over his teammates, but ruling out one of them winning the spot isn’t hard to imagine, based on how little we know of Paddock at 165.

165 pounds may have seen it’s first season without David Taylor hanging around smashing all of his opponents, but two other wrestlers from St.Paris Graham have stepped up to keep the conference on Graham lock down. Bo and Isaac Jordan, who are cousins, were Big Ten finalists a year ago, and in reality it’s hard to pick the field against them going into this season. The rest of the top guys at this weight clear out a bit, but Paddock will need to surprise the entire country to emerge as a contender for this weight.

Challenger: Logan McQuillen SO and Trevor Graves SO

Iowa should continue a string of solid 174 pound wrestlers into this season when Alex Meyer takes the mat in his first official season as a starter for Tom Brands. Meyer has done everything Brands has asked of him so far, including wrestling 174, 184, 197 in one season, in addition to being an excellent scholar.

Meyer has earned praise from the Hawkeye faithful for his late match dramatics in Carver, particularly this last season where he won on last second takedowns against Blaise Butler (at 174) and Nick McDiarmid (at 197), and he also pinned Brunson in the final seconds. Despite not being a starter, Meyer already has the resume of a top eight preseason wrestler, and fans should be excited to see him full time this coming year.

The downside to having a guy like Meyer now in the lineup means that Iowa no longer has a high caliber backup. For now the backups look like McQuillen and Graves, who were a combined 2-8 last year, competing in only a handful of tournaments between them. Both of these wrestlers were multi-sport athletes all through high school so the athleticism is there, we just haven’t seen very much of them on the mat yet.

This weight clears out a ton (the top four) and while Penn State is expected to add a super freshman to the mix, they are still expected to see a drop off with the graduation of NCAA champion Matt Brown. Meyer could come in an instant top three wrestler in the nation’s toughest conference, and should be in the mix to win a title.

Hawkeye fans are hoping that this will finally be the season for Brooks, after showing flashes of being able to take out top ten wrestlers in his freshman year, two seasons ago. With only one year of starting under his belt, Brooks has already managed 45 wins in his career and last year he bonused half of the wrestlers he faced.

Brooks got a raw draw at the national tournament, running into the eventual champ and third place medalist, but this past season saw him pick up some significant wins. With wins over Big Ten champion Dom Abounader, and All-American’s Kenny Courts and Hayden Zilmer, this would be a great time for Brooks to emerge as not just an All-American threat, but as a NCAA title contender.

The backup here should be Mitch Bowman, who as a freshman managed a 17-8 record during his redshirt campaign. Bowman doesn’t have the resume of a big time back up, but he should be more than serviceable as a backup. Bowman was a late addition in his senior class rankings coming out of high school, so he could be labeled as a bit of a late bloomer coming into his own.

Honestly, this was Brooks weight to lose last season in Columbus, and his quarterfinals lost stung particularly deep amongst Hawkeye fans who knew he needed a big weekend to help his NCAA seed. Coming back Brooks will see a lot of the same competition, but there is no reason to doubt that he will be in the thick of a conference title.

After three straight years of wondering if the Hawkeyes are going to or not going to redshirt Nathan Burak, I think this is the year the question dies. After finishing on the stand each of the last two seasons, I would fully expect to see Burak out on the mat for the Hawkeyes.

For one four of the top five are expected to be gone from the weight class. Two to graduation, one taking an Olympic redshirt, and another is expected to go to heavyweight. That alone should make Burak one of the top wrestlers in the nation, and his top end ability combined with the previously mentioned other wrestlers with high ceiling ability may just have what it takes to get it done for a team title sleeper.

The backup here is Kris Klapprodt, who after starting his career at 174 pounds, has worked himself into a very competent 197 pound backup. His resume won’t “wow” you, but he is probably a top 25 wrestler and you can never have enough depth on a squad.

Penn State’s Morgan McIntosh looks to be the big man on campus, and he has been known to give Burak a hard match every time. Michigan All-American Max Huntley will be back for a sixth year and round of 12 finisher Aaron Studebaker (Nebraska) will be back as well. As long as Burak continues to be the wrestler he has been the last three years (consistent) he will be right there in the thick of things.

After having three-time NCAA All-American Bobby Telford in the lineup at heavyweight, fans will be in for a change for the first time in four years when Minnesota prep Sam Stoll takes to the mat this fall for the Hawkeyes. Stoll comes in a former top 20 recruit, and was one of the nation’s most prolific pinners in high school. Known for his Greco-Roman ability, Stoll will now look to make a name for himself in folkstyle.

Stoll definitely has a lot of talent he will be bringing to the table, but the only problem is we really haven’t seen too much of him yet. He doesn’t have the hype of a super freshman, and that mainly stems from the fact that he wasn’t able to pick up a true marquee win as a true freshman. Heavyweight is not the easiest weight to come into college and immediately start dominating, so a so-so season from Stoll last year was to be expected. He does have a knack for pinning opponents and if he can bring that skill into college, he will provide plenty of value to the Hawkeye lineup.

His competition will be Aaron Bradley, who is expected to be the only other true heavyweight on the roster. Bradley is coming back from a two year Mormon mission, so in reality this spot is all Sam Stoll for this coming year. If Stoll needed to miss a dual at some point this season, Kris Klapprodt will most likely be the guy who steps in for a spot start.

This weight was one of the toughest in the Big Ten last season, but four of the nation’s top wrestlers will graduate out of the conference, and a fifth will be taking an Olympic redshirt, leaving plenty of opportunity for Stoll to step into the spotlight. The Big Ten returns NCAA runner-up Adam Coon, and All-American Michael Kroells as the top competitors. Stoll did manage to beat Big Ten eighth place medalist Brooks Black this season, so Stoll has a very real chance to be top five in the conference with all of the weight’s departures for the upcoming season.