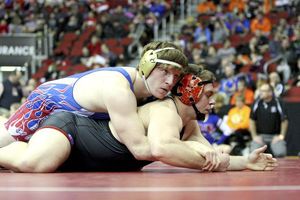 The Panther Train just keeps on rolling in Cedar Falls, as Iowa’s top ranked heavyweight, Carter Isley of Albia has committed to Doug Schwab and the UNI Panthers to continue his wrestling career. Isley is considered the #48 prospect according to InterMat in 2016, and he comes in as the #3 Iowan on the list. Isley has always been one of Iowa’s most successful 2016 recruits, taking 8th at the state tournament as a freshman, 2nd as a sophomore, before winning his first state title this past season at 220 pounds.

Perhaps even more impressive was Isley’s summer which included the Albia wrestler earning double Junior All-American honors out in Fargo, North Dakota. Isley, who hasn’t wrestled a ton of freestyle or Greco-Roman, especially on the national stage shocked many Iowa fans with his breakout performance in Greco which saw him reach the finals of the Junior tournament. He followed that up with a fifth place finish later in the week in freestyle, with one of his wins coming over the 2014 Cadet National champion from Iowa, Gannon Gremmel. The Gremmel win was a huge eye opener among the recruiting ranks, and it propelled Isley into the top 50 recruits in the 2016 class.

“I took my visit to UNI this weekend and I liked it a lot. The guys were awesome and I will have some really great training partners.” Isley said of his decision to commit to the Panthers. Isley also commented on the recent success UNI has seen on the recruiting scene as an attractive reason for selecting UNI. “You look at the recruiting they have done and in a couple of years and how it is going to look and it’s going well (for UNI).”

Not only does last year’s recruiting class provide incentive for Isley, but he also commented that the guys already in the room are top notch talent. “Blaize Cabell, is a senior right now, but he is going to stay back and train with the Panther Wrestling Club. I plan on redshirting my freshman year while training with transfer JJ Everard, and then being ready to go.”

Fans who frequent IA Wrestle may remember from our Overtime interview earlier this summer, that Isley was looking into playing college football, but Isley was ready for that question as well, “I just looked at what I could do on the national stage in wrestling and in football and it was really easy.”

Isley selected UNI over in-state powerhouse Iowa, in addition to Nebraska and Purdue. Isley joins another top recruit in the 2016 class, as UNI already landed the commitment of Rudy Yates earlier this summer. Isley also wanted to thank his coaches and family for following him all the way through this decision and for Panther fans he added, “I can’t wait to be a Panther.”