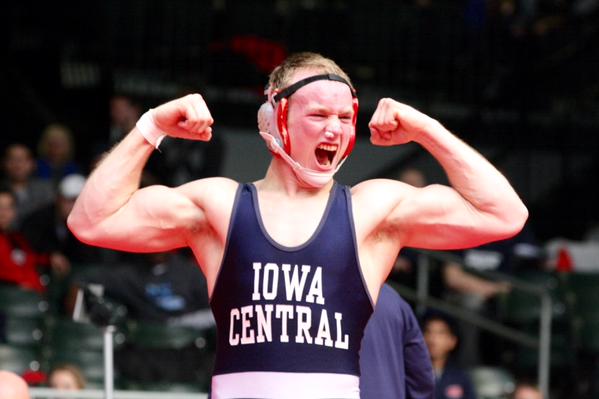 MORE news out of Cedar Falls as Junior College National Champion Tyler Hoffman of Iowa Central has committed to UNI and will wrestle for the Panthers. Hoffman is the second commitment on the day for the Panthers, joining Albia heavyweight Carter Isley, who announced his commitment earlier tonight.

Hoffman is a recognizable name for high school fans, who remember the former East Buchanan standout captured the 2014 1A 195 pound title for the Buccaneers. Hoffman then enrolled at Iowa Central Community College, where he dropped to 184 pounds and won a NJCAA title as a true freshman. Hoffman’s NJCAA season was so impressive he was actually tabbed as IA Wrestle’s NJCAA wrestler of the year, having to defeat the #5 ranked wrestler just to win the starting spot in the Iowa Central lineup.

The plan is for Hoffman to finish his second year at Iowa Central where he plans to redshirt. He will then transfer into UNI for the 2016-17 season with three years remaining and will compete for the 184 pound spot. That lines up well for the Panthers, who currently have senior Cody Caldwell as their starter, but from there it is an open competition for Doug Schwab to find his next starter.

“(UNI) feels like home and it’s the best fit for me to win a national title!” Hoffman said on why he selected UNI.

The Panthers have really always been the front runner for Hoffman, as UNI was on his list right out of high school along with Iowa. The Panther Train continues to find more and more quality wrestlers and depth Schwab has acquired is putting major conference schools to shame.