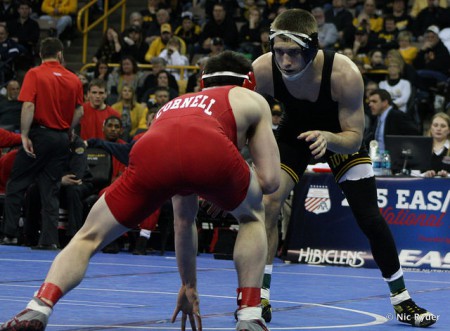 Former University of Iowa wrestler Josh Dziewa has been hired at the University of Pennsylvania as the team’s Director of Wrestling Operations.

“I am excited to announce that Josh Dziewa has officially joined the Penn Wrestling staff as our new Director of Operations,” said Tirapelle, the Roger Reina Head Coach of Wrestling. “Josh is a Pennsylvania product that spent his collegiate career competing for the storied University of Iowa program. In addition to his contributions to Penn Wrestling, Josh will also spend time with the Pennsylvania RTC and Beat the Streets Philadelphia. All three organizations will benefit greatly from his wealth of experiences.”

In his role, Dziewa will be responsible for coordinating the handling all of Penn Wrestling’s operational needs; including travel arrangements, video scouting, camp and clinic registration, and recruiting. In addition, he will serve as Penn Wrestling’s liaison to Beat The Streets.

Dziewa graduated from Iowa this past season going 29-9 for the Hawkeyes which included a Big Ten runner-up finish at 141 pounds. Dziewa was part of five seniors in the Hawkeye lineup that were part of a #1 ranked recruiting class in 2010. The class capped off their senior season with a Big Ten conference dual and tournament title, as well as a second place finish at the NCAA championships.

In addition to being a two year starter at 141 pounds, Dziewa was also an academic standout becoming the eighth Hawkeye in program history to earn academic conference honors four times. He also earned the J. Donald McPike Award for the highest GPA by a senior during team awards.

This is a move home for Dziewa, as he prepped at Council Rock South High School and was a Yardley, Pennsylvania native.