Michael Pixley Talks About His Decision to Transfer to Grand View 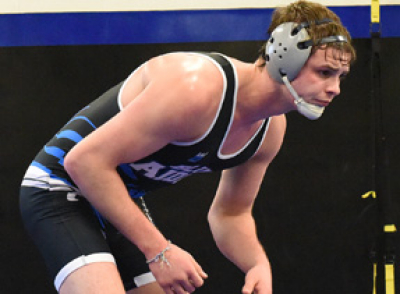 The four-time defending NAIA Champions Grand View have gotten stronger as today it was announced that former Lindsey Wilson wrestler Michael Pixley announced with us that he will be transferring to the Vikings for the start of the 2015-16 season.

The #15 overall recruit in the 2014 class, Pixley committed to Lindsey Wilson out of Blue Springs, Missouri. At Lindsey he had a successful season going 21-1 record, with his lone loss coming in the 184 pound finals at the NAIA national tournament. In addition to being one of the top performers for the Lindsey Wilson team, he was named the Mid-south Conference Wrestling Freshman of the Year after his dominating season.

This is great news for the Viking program, who graduate several of their stars from the 2015; among them NAIA Champions Ryak Finch and Brandon Wright, and four-time All-Americans Gustavo Martinez and Jimmie Schuessler. Pixley will most likely try to and replace All-American Christian Mays, who took sixth at the same weight.

We caught up with Michael to talk about his decision to transfer:

When did you decide that you would be leaving your current school?

Pixley: I decided to transfer at the end of June. No disrespect to my friends and coaches at Lindsey, I just felt I wasn’t going to excel if I stayed there.

What about Grand View as a program interested you in the first place?

Pixley: Definitely the way Grandview’s team carries themselves and also the history behind the team I felt it was a better fit for me.

What will you study at Grand View?

Pixley: I will be studying education at Grandview. My plan is be a high school teacher and wrestling coach in the future.

What weight will you wrestle?

Pixley: 184. I plan on growing and filling into my weight class better this year.

Grand View is currently in need of replacing quite a few All-Americans, what are your thoughts on stepping into the Viking lineup and possibly being a leader on that team?

Pixley: I’m going to live the national champion lifestyle and not take any shortcuts this year and for years to come. If I do that everything else will fall into place.

You finished runner-up as a freshman, what do you need to take the next step and become a National Champion?

Pixley: The only person who can do it is myself. I plan on grinding everyday and striving for greatness. Living a clean lifestyle and making good choices on and off the wrestling mat. Everything plays a role in your life from what you eat to the decisions you make off the mat. I plan on dominating at everything this year, including the classroom.

Pixley concluded the interview by saying, “I would like to say thanks to Coach Mitchell for believing in me and giving me this opportunity to prove myself to everyone! Also to the rest of the Grandview coaching staff looking forward to starting a new journey and winning some more team titles!”