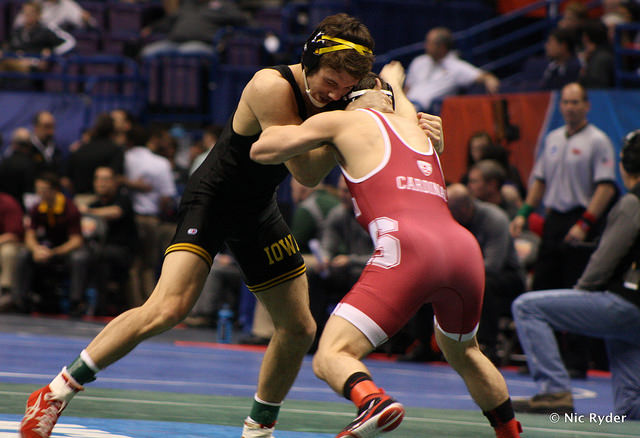 The interview is available through the station’s podcast, and I encourage you to listen to the entire thing to get the full effect of Thomas Gilman and what he had to say. Last year Gilman made the big comment that Cory Clark and himself were better than the McDonough-Ramos combination, and as usual, this interview delivers on some great content. The interview begins around the 29:00 minute mark.

“I have never wrestled outdoors, nothing this unique ever.” Gilman told KGYM hosts on the outdoor dual, “I have wrestled overseas multiple times, I have competed all over the country, but this is going to be an amazing experience competing outside in Kinnick Stadium.”

When asked what his biggest concern for the event, he said: “I wouldn’t want to show up and have 10,000 people there. That’s the only thing I am worried about. I want to have 70,000 people there. Other than that I am not too worried about anything. People have asked about the weather and how I am going to prepare for that, it’s just preparing for any other meet. It could be 50 degrees it could be 30 degrees, it could be warmer, it could be colder. I can control certain things and that’s how I feel and that’s how I look at the things… so I am going to get myself ready and I am going to be ready for anything that Mother Nature throws at me.”

“Always training. I was asked earlier if getting fourth at nationals motivated me, if it gave me a little fire. I just said it wouldn’t matter to me if I got fourth at nationals, eighth at nationals, or first and a national champion because there is always a fire and I am never where I want to be, and if I was a four-time national champion, a World champion, or an Olympic champion, I would still have that fire to get better. Of course that fourth place and those six losses they eat at me every day and it fuels my fire. Some days you maybe might not want to go in and workout at six o’clock in the morning, but then you realize you have those six losses on your belt from last year so you better get your butt out of bed and get working.”

One thought on “Thomas Gilman Talks Kinnick Dual on KGYM”