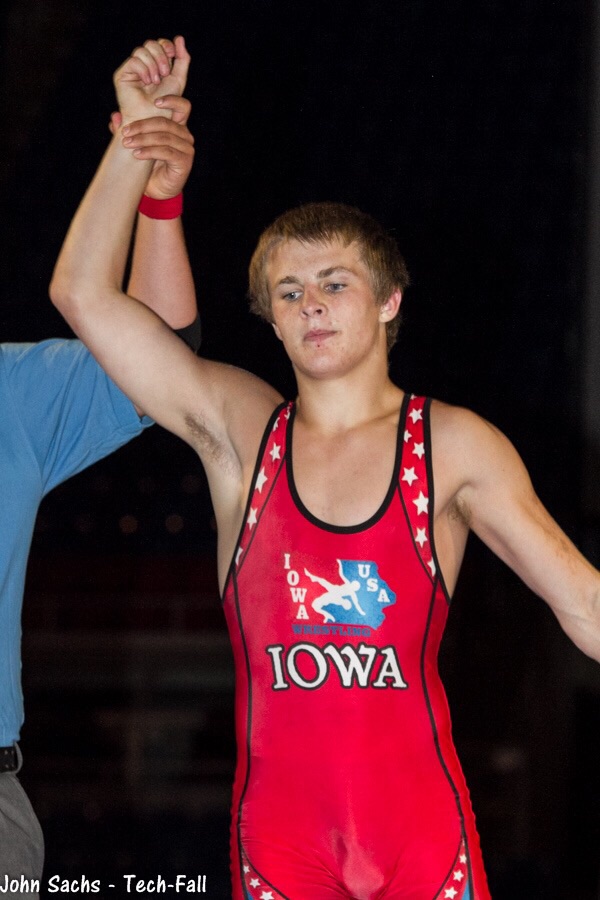 Today, InterMat updated their new class rankings for the 2016 senior class (Platinum), and among the group there was six native Iowans making the list, and two additional wrestlers who have committed to wrestle for the University of Iowa.

Lisbon’s three-time state champion Carter Happel holds the distinction of being the top Iowan of the class, and he comes in at #30 on the rankings. Happel is probably one of the biggest talents Iowa has produced in recent years, as he captured a freestyle Fargo Cadet national title as a freshman, and last summer he won another Cadet national title that placed him on the Cadet World Team. Happel will wrestle at either 138 or 145 this upcoming season and will most likely project at 141 or 149 pounds for college. His current list of schools consist of: Iowa, UNI, ISU, Minnesota, and Penn State.

Ethan Andersen is another one of those Cadet national champions who wrestled on the World Team last summer in Greco-Roman and he was one of the key pieces from that tough Southeast Polk lineup, which one both dual and traditional team title last year. Andersen, raned #32, will be headed to Missouri to wrestle heavyweight for the Tigers in college, but as of now he is undecided whether he will wrestle 220 or go up to heavyweight for the Southeast Polk Rams next year.

Dubuque Hempstead’s Gannon Gremmel is a wrestler that has locked horns with Andersen on a number of occasions the last two years, and this might be a year we see them at different weights. Gremmel will for sure be moving up to heavyweight, and last summer we saw him capture a freestyle Fargo Cadet national title. Gremmel falls just outside the top 50 at #51

Brock Rathbun of Center Point is a surprise to me being all the way up at #57, and it’s not because I doubt the two-time state champion’s talent, I have just not seen anyone give him this much respect. Rathbun looks to be another in a long line of lightweight hammers that the state of Iowa produces. Projected as a 125 or 133 pounder, Rathbun says right now he is looking at either Iowa or UNI for his college decision.

Fort Dodge certainly has a fantastic team assembled for a 2016 run at the 3A state title and one of those names to be familiar with is #68 ranked Sam Cook at 195 pounds. Cook had a fantastic season and with some of the heavier hitters graduating, Cook could emerge as one of the state’s premiere upper weight wrestlers. Cook hasn’t made his college plans known, but plenty will be eyeing him as potential 197 pounder.

Carter Isley is the final Iowan ranked in the latest release, and he comes in at #79. The Albia wrestler is projected to be at either 220 or heavyweight, and he is also a football standout, which may be the only thing standing in the way of him wrestling in college.

In addition to the native Iowans on the list, the University of Iowa have already received verbal commitments from two top 50 ranked wrestlers. The headliner is of course Alex Marinelli of St. Paris Graham (Ohio), who has absolutely destroyed all competition over the past year. That includes a performance where he took out a top 2015 senior at AGON V in freestyle, something Marinelli hardly trains in. Marinelli wrestles in the 160 pound weight class, and will in all likelihood wrestle 165 in college.

The other big recruit is Kaleb Young of Punxsatawney (Pennsylvania) at #40. Young was actually the first addition for the Hawkeyes out of the prestigious Young Gun Wrestling Club, and last season he took fourth in a tough bracket, that included a top five 2015 wrestler Vincenzo Joseph. Young will likely head to 160 for 2015-16 and will project at either 157 or 165 for Iowa.