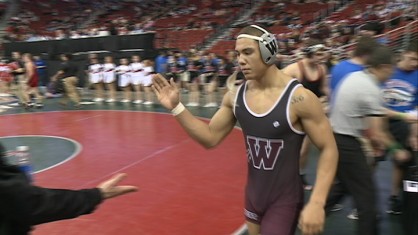 It was a disappointing day for the Iowa wrestlers today at the Junior World Team Trials, as the top place winner was at 96 kg where Marcus Harrington took third place. No Iowa wrestler made the finals of any weight against the tough competition, and only the Cyclone Harrington would win their last match of the day.

Iowa State’s Marcus Harrington lead the way for the state, wrestling back for third after dropping his first match of the day in the quarterfinals at 96 kilos. The smaller 96 field only had six competitors, so the top seed, Jacob Seely, and Harrington both received byes to the quarters. Harrington would drop that match by pinfall in 4:50 to Ben Honis. Harrington would win his next two matches, first against Chip Ness from North Carolina 11-9 to move to the third place match. There he would meet Joseph Ariola, the Illinois State Champion and current Buffalo wrestler. Ariola proved no match for the Cyclone however; Harrington won by tech fall, 15-4, to secure third and go 2-1 on the day.

At 60 kilos Iowa had two men wrestling, UNI freshmen Josh Alber and Nebraska freshman Colton McCrystal. Alber wrestled the number one seed in Mitchell McKee in the first match of the day and lost by pinfall in 2:13. He went on to defeat William Erneste to meet McCrystal in the consolation quarterfinals, after McCrystal lost 8-2 to Brock Zacherl (the challenge tournament champion) in the semifinals on the championship side. The two had a back and forth battle, with Alber leading by as much as 8-0, and was up 9-6 with about 15 seconds left. McCrystal hit a feet to back move though, scoring four points and gained an additional point on a lost challenge by Alber, giving McCrystal the 11-9 victory. McCrystal would fall to Kaid Brock in the third place match, 11-8, to claim fourth.

At 66 kilos Minnesota recruit Freddy Stroker had the best day for Iowa guys, claiming fourth place after falling in the quarterfinals on the championship side and going 3-2 on the day. Stroker won his first round match against Samuel Crane 6-2 and his second round match against Gabriel Grahek 3-0. He met with Zain Retherford, the All-American from Penn State next and lost by pinfall in 5:01. Retherford went on to win the challenge bracket.

UNI recruit Max Thomsen also got Retherford, but wrestle him right out of the gate. The Nittany Lion took down the incoming Panther by tech fall, 10-0. Thomsen went on to battle back to the consolation semifinals, where he would meet a familiar foe.

As Stroker fell to the backside he would meet Thomsen, where the two would wrestle to go to the third place match. It was a close match but Stroker avenged a loss to Thomsen from the Keith Young invitational in Decemeber, 3-1. Thomsen would finish the day 3-2, while Stroker would meet Anthony Ashnault. Ashnault was the second NCAA All-American that Stroker had faced Friday, but the Scarlet Knight edged out the young Gopher, 7-6 to claim third.

Grand View’s Lawton Benna had a rough day at 84 kg, going 1-2 and bowing out of the tournament in the second round of the consolation bracket. He defeated Colin Carr from Minnesota in the opening round 14-10, but then fell to the 1 seed Riley Lefever by pinfall in 2:38, and lost to Ryan Christensen by tech fall 11-0.

Rounding things out at 120 kilos was Southeast Polk’s own Jake Scanlan. Scanlan would have a rough start to the day, losing a decision to Buffalo’s Jake Gunning 6-0. He would bounce back however, and rattle off two wins in row, one by pinfall and won by tech fall, to reach the third place match. There he would run into Matt Voss, and dropp a 11-2 decision to finish 2-2 on the day and take home fourth place.