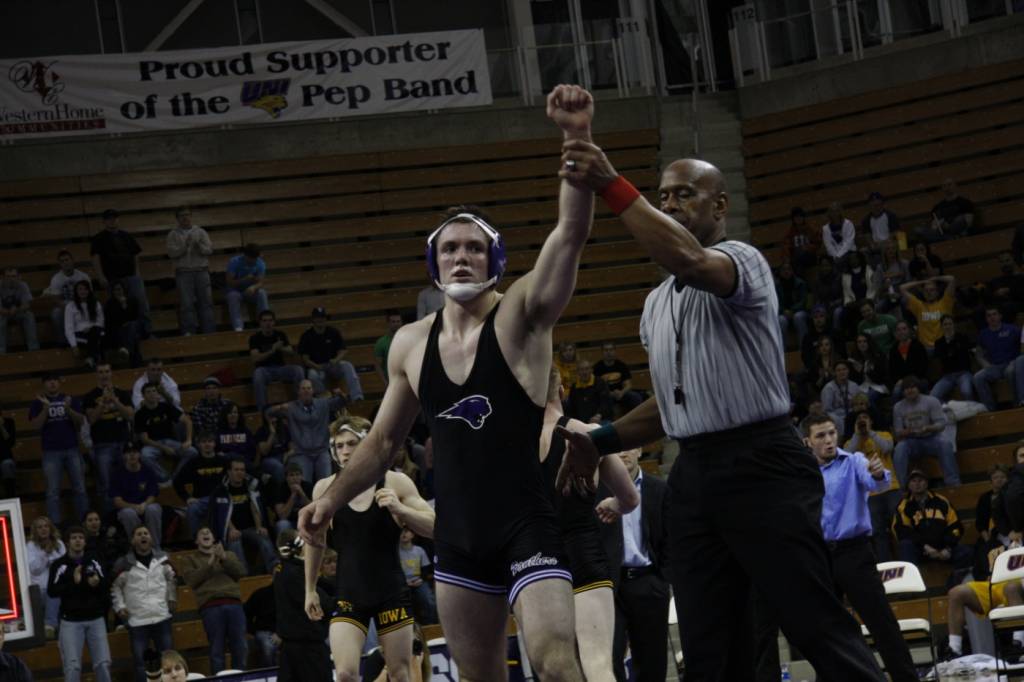 Former Panther Moza Fay has zeroed in on one goal since graduating in 2009: winning.

To be fair to him, he was probably focused on that when he was at UNI. He was a two-time WWC Wrestler of the year and a two-time All-American after all. But now his goals are all about winning on a bigger stage, and winning gold medals.

“After college I stayed at UNI for a semester, and moved out to the Olympic Training Center (in Colorado) in January of 2010,” Fay said in an interview with us last week. “I moved out there to get some more training partners and I (had) been there for the last five years training.”

Fay was not only training in Colorado, he also spent some time with the Cuban National Team in early 2012 to prepare for the Olympic trials that year in Iowa City. After the trials Fay took his training in a different direction.

“After 2012 I joined the Army WCAP (World Class Athlete Program). It’s a great organization, where athletes from different disciplines come together all in one unit (bobsledding, track, swimming, shooting, rugby, boxing, and wrestling), recruited from within the Army. Our Military Orders say that our job is to compete at the highest level and try to make the Olympic team.” You can check more of what the Army WCAP has to offer here.

The Wild Card entrant in the World Team Trials in June had only good things to say about the Army and the WCAP Program.

“It’s been a blessing for me; the Army does an awesome job supporting your family and everything. It’s been going great, I’m learning lots of stuff, I’m getting good training but at the same time my job is to compete and wrestle full-time which has been awesome.”

The WCAP program has opened up some new doors for Fay, allowing him to recently compete in Cuba at the Cerro Pelado International Tournament and at the CISM Military World Championship in New Jersey. The CISM Championships were Fay’s first World Championship level event that he had participated in. He took the silver medal in both events.

The CISM Championship in particular helped boost Fay’s confidence and show that he can compete on an international level.

“The Polish guy (Krystian Brzozowski) was a two-time Olympian, and the Kazakhstan guy (Galynmzhan Userbayev) was a two-time world team member,” Fay said of his opponents. “It definitely was a confidence builder, and just to know that the American style of wrestling, what I’ve learned and grown up doing, works for me.

“Getting that international exposure is a huge confidence booster, and at the same time it’s really fun. To wrestle somebody that’s from another country, coming together, it’s really fun.”

The Army Team won the first ever team title at the US Open in Las Vegas this year and their 13th Greco-Roman team championship. A total of seven soldiers won individual championships, and 11 of 29 soldiers reached the finals.

“There are other clubs, like Titan Mercury, NYAC, that support a lot more people than the Army. But the Army has really select individuals that are laser-focused on what they’re doing and the Army mentality. When we’re out there on the mat, we’re going to war. That’s what wins.”

Not only does he praise the Army teams for achieving the award, Fay thinks that the team element can really help boost the sport nationally, especially with the rise of Regional Training Centers.

“We need the rivalries, you’re not only thinking about winning an individual title but you’re also doing this for your team, that’s what wrestling needs for the sport,” said Fay on the competition. “The creation of the Regional Training Center’s has been a great thing for the sport, because they’re competing against each other as well.”

After a disappointing individual tournament in Las Vegas – Fay won his opening three matches by tech fall, then went on to lose the next two to place sixth – he’s looking forward to putting some new training to good use.

“About a month and a half ago, the Army decided that the Olympic Training Center wasn’t the best place for us, so they sent us to State College, Pennsylvania, to train with the Nittany Lion Wrestling Club,” Fay explained.

The Army, Nittany Lion WC, and Fay hope to put it together June 12-14th, as they all fight for a spot on the World Team. Fay was the last man to be selected to the 70 kg qualifier as the wild card, but he’s wrestled nearly everybody in the field at least once. When I asked him about who he was most looking forward to wrestling, without hesitation he said Nick Marable.

“There’s a lot of tough competitors there, yeah, Marable,” Fay said. He would have to beat the field to get to the two out of three final against the former Missouri Tiger.

More than anything else though, Fay wanted to expresses his gratitude for the sport, and for the Army WCAP program that allows him to compete.

“One thing I did want to say, this is very important, the Army does a great job of support us, and it’s a huge privilege to be in this unit that I’m in. It’s an honor to represent Team USA on the mat and at the same time we’re serving our country in the military.”

“I believe I have one of the best jobs in the world, I get to wrestle and get paid for it. The work is extremely hard.”

Moza Fay is the second Panther we’ve profiled that will take part in the World Team Trials in Madison, Wisconsin, next month. To read the first profile on Joey Lazor click here. We’ll have the third and final profile up on Friday on Joe Colon.