Semifinals for U.S. Open are set: Ramos-Colon Among Most Anticipated Matchups 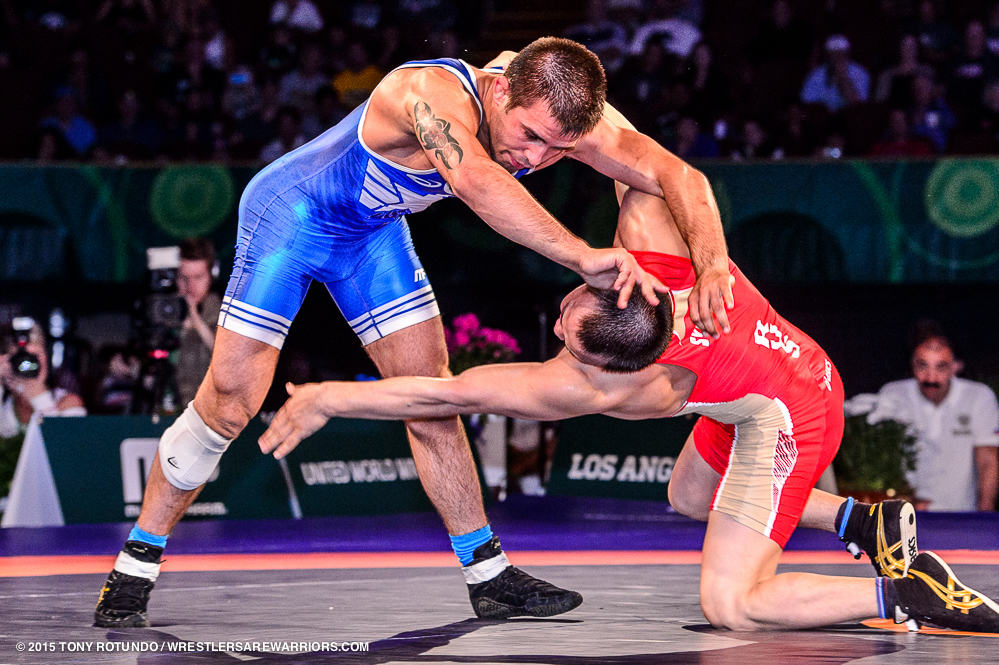 After an exciting opening round in Las Vegas, the Senior U.S. Open semifinals have been set. The top five wrestlers from the Open advance to the World Team Trials in Madison, Wisconsin in June and all semifinalists are assured a top six finish, which means they only need to win one more match to secure their automatic qualifier. Additionally winners of the Open will advance to the finals of the World Team Trials, to a best of three finals. Essentially winning the U.S. Open exempts wrestlers from wrestling an additional three matches at the Trials, which means a competitive advantage of being better rested and focused on beating just one opponent.

It comes as little surprise that of the four semifinalists at this weight, two of them are former Iowa wrestlers. Top seeded Tony Ramos has gotten off to a good start with a pair of technical falls, and then added a 4-0 win over former World Team member Nick Simmons in the quarterfinals. Joe Colon won fairly similar, a pair of technical falls and then a 4-1 win over a former World Team member Angel Escobedo. The last time these two met? Everyone remembers when Colon caught Ramos in the Midlands finals and pinned him. This a re-match that many fans were hoping for in the 2014 NCAA finals at 133 pounds, and now we get it with a U.S. Open championship on the line.

The comeback kid, Dan Dennis surprises all in Las Vegas by making the semifinals at 61 kg, and he did so by upsetting the #3 seed and Junior World medalist Joey McKenna 6-4 in the quarterfinals. Dennis started strong by winning 11-0, and then jumped out to a 10-4 lead over Steve Mytych, but then faded late to win 10-8. Up next will be 2013 World Team member Reece Humphrey, who looks to be the favorite to win now as he is the bracket’s highest seeded wrestler.

It really doesn’t feel like all that long ago, Metcalf was dominating the college scene and throwing Penn State’s Frank Molinaro around the mat like a rag doll, but it’s been five years since the days when Metcalf pinned (and won by major decision) against Molinaro in college. Fast forward to today and Metcalf is one of the best wrestlers in the World at 65 kg, and Molinaro made his first National team last year at the Trials. Metcalf has actually looked human at the Open, giving up a takedown to Chase Pami in the quarterfinals was the first points he had surrendered at the Open since 2013. Molinaro is tough to score on, so Metcalf will be hard pressed to duplicate his college results.

Fay returns to the Open semifinals and he has looked pretty good so far winning by scores of 10-0, 12-0, and 14-4, with the last win being over Jason Welch. The highlight of Fay returning to the semifinals could be short lived when he faces Nick Marable, who was the man that defeated him 5-1 in last year’s Open finals. Fay has some good momentum on his side, and Marable is coming off a tough match where he had to gut out a 3-1 victory.

Just as an aside, there are no Iowa guys in these semifinal matches, but how crazy is it that high school senior Anthony Valencia is in a group of wrestlers that include the likes of these three. Sure, if Kyle Dake and Jordan Burroughs were here, he probably wouldn’t have made the semifinals, but Valencia beat some tough hombres to make it this far.

Deron Winn makes into the Open semifinals by staging a late comeback against two-time NCAA champion Chris Perry, beating him 9-3. Winn has had a pretty good tournament so far winning 10-0 first round and then he beat former Junior World silver medalist Patrick Downey 7-1. So far the decision to move down a weight from 97 kg looks to be really paying off for Winn. His next opponent, 2013 World Team member Keith Gavin will pose a tough challenge for Winn since the former Pitt wrestler is known for being tough to score on.

Olympic champion Jake Varner is up to his usual antics so far as he has posted three straight wins to return to the U.S. Open finals where he will face JD Bergman. Perhaps the more interesting thing is the other side of the bracket, where two-time Junior World medalist Kyle Snyder has reached the semifinals against J’den Cox. Could we possibly be witnessing the passing of the torch this weekend? Doubtful, but it will still be interesting none the less to see the young guns trying to knock off the veterans.

No Iowa guys here either. The biggest thing is seeing Dlagnev healthy after the World Cup and watching him go to work.

Fighting through on the backside:

One thought on “Semifinals for U.S. Open are set: Ramos-Colon Among Most Anticipated Matchups”