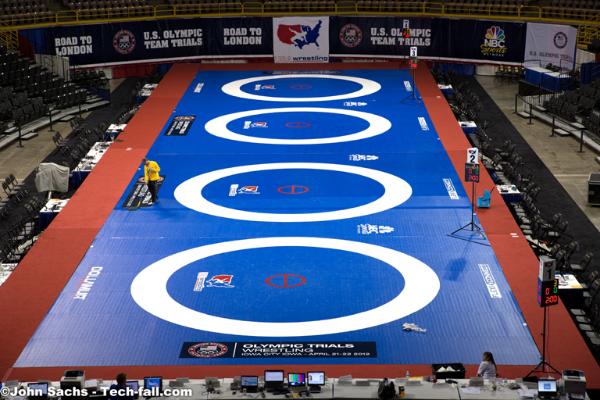 USA Wrestling released good news for wrestling fans living in or near the state of Iowa, as the Olympic Trials will once again be held in Iowa City at Carver-Hawkeye Arena.

This will be the second straight time that Iowa City and the Hawkeyes have hosted the Trials, with the 2012 Trials earning record breaking attendance. The two day event drew well over 50,000 back in 2012, which help make the decision for the Trials to come back to Iowa City. In fact 54,000 fans packed into Carver in the record breaking performance as host city.

Josh Schamberger, the Iowa City-Coralville Area Convention and Visitors Bureau president was one of the main proponents to bring the trials back to Iowa City, but he also gave credit to University of Iowa head coach Tom Brands, who happens to be an Olympic and World gold medalist himself, as being instrumental in securing the bid.

Lots of credit to go around in landing the Trials again but #1 has to be @TomBrandsHAWK! #nocontest http://t.co/Svpwsl1Ngz

This time around Metcalf is once again expected to compete (at 65 kg now), as will McDonough (57 kg) and Keddy (86 kg). Along with Metcalf, Iowa will also feature 2014 World Team member Tony Ramos (57 kg), and could include 2014 Junior World bronze medalist Thomas Gilman (57 kg). Metcalf has mentioned that as of now he is focused on wrestling through the 2016 Olympic games, but is undecided if he will continue competing past that date. Rio de Janeiro, the 2016 Olympic Games host city, along with Iowa City could provide Metcalf with his last shot at pursuing his Olympic dream.

It will be quite the year for Iowa, as the Hawkeyes are also expected to host the 2016 Big Ten Championships in early March.