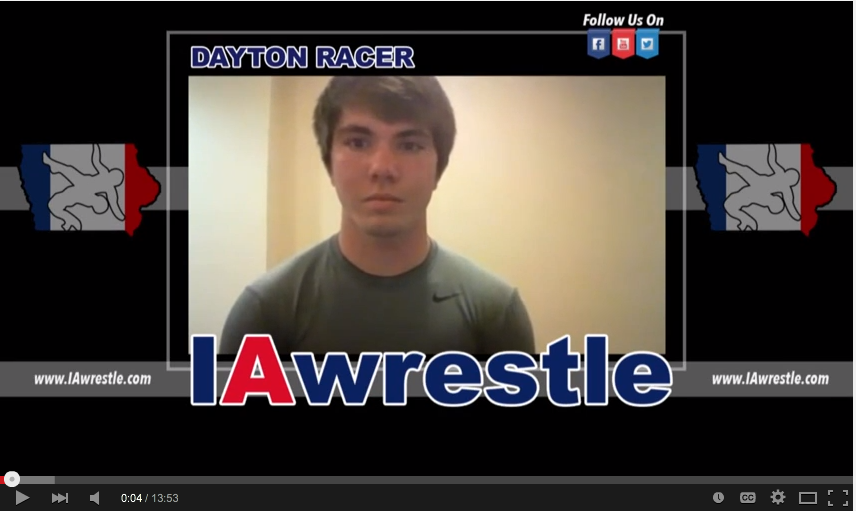 Nationally ranked senior and the 3A runner-up at 160 pounds has decided to continue his education and wrestling career out east at Virginia Tech Racer joined the Bettendorf Bulldog squad after wrestling at the Minnesota powerhouse Apple Valley where he was a 2012 state champion at 145 pounds. Racer also competed for Team Missouri at Fargo this past summer, where he finished a match shy of reaching the stand in Greco-Roman and two matches shy in freestyle.

At Bettendorf Racer spent a majority of the season ranked #1, until he was upset in the finals by another top 100 senior. Racer debuted at #2 in the IAWrestle 3A Preseason rankings. Racer climbed to the #1 spot after handing another top 100 recruit Bryce Steiert a loss in the finals of the Keith Young Invite in December. After that the Bulldog never let go, only taking a loss at the Clash tournament in Minnesota when he dropped to 152 to face Issiah White of Oak Park River Forest.

Steiert got some revenge over Racer in the 3A state finals, but Racer has already moved past that state finals loss as he captured a NHSCA national title in Virginia a few weeks ago.

Late last year in an interview with IA Wrestle, Racer told us that he was considering Missouri, Iowa, and Cornell, but it appears that the Hookies made a late push on to the scene.

This is not the first time Virginia Tech has nabbed a top 100 recruit from Iowa, as current Iowa head coach Tom Brands landed Dan LeClere, Joe Slaton, and Jay Borschel during his first year as coach out at Virginia Tech, before later returning to take over the Hawkeye program and his recruits following Brands. Now Virginia Tech is led by another former Hawkeye, Kevin Dresser, who recently led his team to a top ten finish this past season at the NCAA tournament.