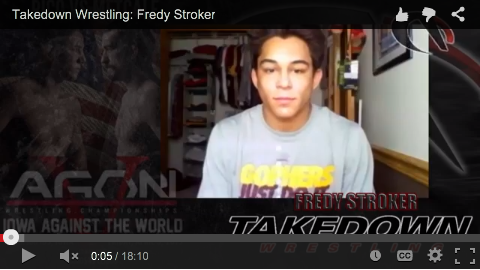 Continuing the #1 vs #2 matchups, we will get another opportunity to see two high school wrestlers battle it out for the number one spot. Mike Kemerer currently holds the #1 spot in the 145 rankings after putting together his most successful season on the mat, while Fredy Stroker sits at #2 looking to get back on top of his weight class. Kemerer is the Hawkeyes top ranked recruit in the 2015 class out of Pennsylvania, while Stroker is the top high school recruit from Iowa. Both have battled for many years with Stroker actually being a Pennsylvania native until he entered high school.

As mentioned Kemerer has not only had a great season, he’s having a #1 wrestler kind of season. After a top five finish at Fargo following the conclusion of his junior year, Kemerer entered his senior season and started winning..EVERYTHING. For the first time as a freshman Kemerer captured a Super 32 final over Iowan Max Thomsen, he then went on to win an Ironman, a PowerAde national title, and his first PA state title.

For Stroker it’s a matter of getting back on top. Two years ago the Bettendorf wrestler won Flowrestling’s Who’s Number One, which placed him as the #1 ranked 132 (over Kemerer) and one of the top wrestlers in the entire nation. Stroker has taken some losses this season to Joseph (2014 Who’s Number One) and to Thomsen (in season tournament) which is why despite him beating Kemerer in the last two meetings, he is ranked below his childhood friend. The last time these two wrestled in freestyle it came down to a last second takedown by Stroker to get the win, so we expect a good battle at AGON V.