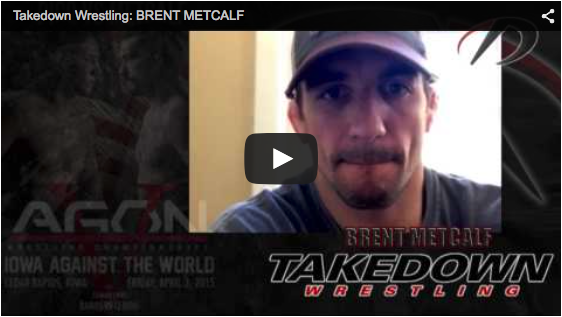 Potentially the most highly anticipated match for the 2015 World Team Trials (and maybe even the biggest match heading into the 2016 Olympic Trials) was going to be three-time World Team member and current #1 USA ranked Brent Metcalf taking on the 18 year old sensation Aaron Pico. Luckily for fans, they don’t have to wait until this summer to see the match as AGON has put together a main event with a showdown of these two wrestlers battling it out on Brent’s turf in Cedar Rapids, just up the road from the college that made him famous.

This match will be the tale of two similar, yet different wrestlers. For Metcalf he comes in as the veteran, looking to defend his status as the best in the nation and letting the new guy (Pico) that his time has not yet come. For Pico this is a moment where he can not only defeat the nations best wrestler, but also defeat a wrestler he had looked up to for inspiration not that long ago.

While the age gap separates these two, Pico has adopted a style that Hawkeye fans will find very familiar to the one they have watched Metcalf display all these years. Pico and Metcalf both pride themselves on their superior physical conditioning, and both wrestlers attempt to use “heavy hands” or work their opponent’s head to wear them down and set up their offense.