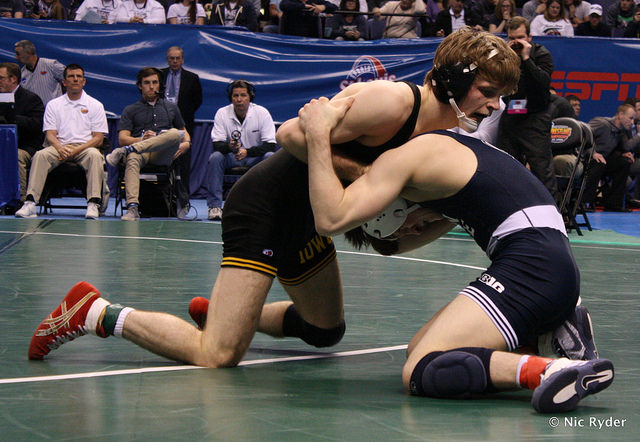 This weekend at the University of Iowa wrestling’s annual award banquet, sophomore Cory Clark was named the team’s Mike Howard Most Valuable Wrestler after his season which saw him extend a Hawkeye streak of 26 consecutive years with an Iowa wrestler in the finals.

Clark finishes his season with a 30-6 record and finished runner-up at the NCAAs to Oklahoma’s Cody Brewer in the 133 pound finals. Clark also captured his first Midlands title and finished third at the Big Ten conference championships in Columbus earlier this month. He finishes his season second on the team with nine falls and went 13-4 in duals for the Hawkeyes. The Southeast Polk graduate also finished his second year at Iowa with a 16-1 record at Carver-Hawkeye Arena.

Three-time All-American Bobby Telford earned the award for most falls on the season, as the senior racked up 13, including two at the NCAA tournament.

Senior Josh Dziewa picked up the J. Donald McPike Award for the highest GPA by a senior. Dziewa was just the eighth Hawkeye in program history to earn academic conference honors four times.

Freshman Brandon Sorensen and sophomore Alex Meyer shared the John and Dorthy Sill Award for most dedicated wrestler. The coaches appreciation award went to senior Matt Gurule, who spent time at 125 and 133 over the past five years and ends his career in a Hawkeye singlet with a 22-10 record. The Mike J. McGivern Award was earned by junior Brody Grothus for being the most courageous wrestler.

Rounding out the awards was All-American Nathan Burak receiving the most improved wrestler award.

The NCAA runner-up and Co-Big Ten Conference champion Hawkeyes will return four All-Americans next season led by two-time All-Americans Cory Clark and Nathan Burak while Sorensen and sophomore Thomas Gilman earned their first top eighth finish at the national tournament. The Hawkeyes graduate two All-Americans in Telford and Mike Evans, who both accomplished the feat three times in their careers.

One thought on “Cory Clark named Hawkeyes Most Valuable Wrestler”