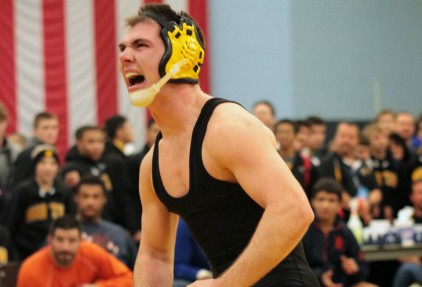 The freshman and sophomores led off the action in Virginia Beach, which meant #20 ranked Brody Teske was the first Iowan to take a crack at a national title. After winning his first six matches to open his tournament at the NHSCA freshman 106 pound wrestler Brody Teske was all set to have a face off with one of the best wrestlers in the nation in #3 ranked Roman Bravo-Young. Teske put up a late charge against the super freshman, but in the end he wasn’t able to recover from surrendering early match points. His 14-8 finals defeat capped off a still terrific weekend with a nationals runner-up finish.

State runner-up Dayton Racer put an exclamation point on his weekend as he captured the 160 pound National title in the senior division. Racer is ranked #6 nationally at his weight, and remains uncommitted. Back in August Racer told IA Wrestle that the three colleges he was looking into were Missouri, Cornell, and Iowa. The bracket’s top seeded wrestler defeated Sheldon Wright (Virginia) 3-0 to capture the National crown.

Dayton Racer of Iowa battled at 160 to win! @NHSCA #2015HSN #EarnIt #CliffKeen #Undecided & some team will luck out! pic.twitter.com/pOwZ9EP9BP

Freshman Billy Higgins (Council Bluffs) rebounded after his 7-0 defeat in the semifinals and won 8-0 over Jackson Moomau (West Virginia) to reach the consolation finals and wrestle for third. There the high school All-American fell to Garrett Beam (New Jersey) 6-2 to bring home 4th place.