Glosser and Wilcke power their way to National titles 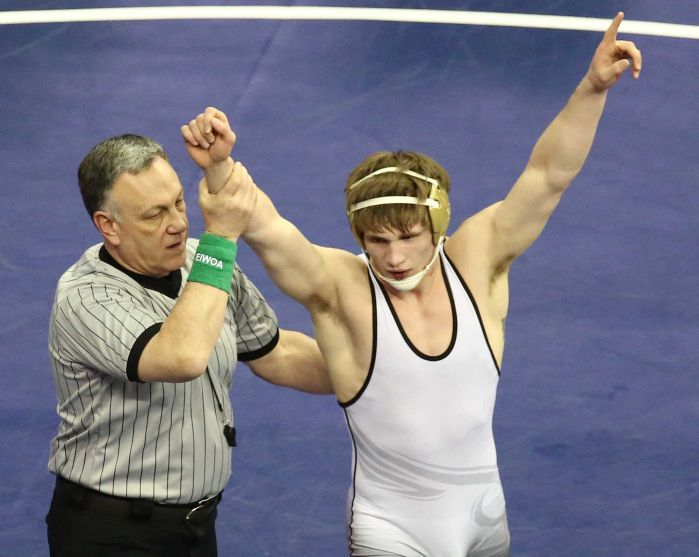 Last month Glosser finished third at the Iowa state championships in the 1A 138 bracket, but today would be a different story as he opened his day with back-to-back technical falls with the first being a 15-0 win over Joe Galaviz (San Jacinto Wrestling)  and the second a 19-2 Stanton Peay (Cimarrow Memori). Glosser then picked up a 4-0 decision over Collin Williams (Thompson Valley) to reach the finals at 145 where he defeated fellow Iowan Dylan Schuck (Zapas – Sibey, IA) with an 11-2 major decision to win his bracket.

Nationally ranked Wilcke went to work in the 195 pound bracket as he won by bonus in three of his four wins. There were only five wrestlers registered at Wilcke’s weight which meant they wrestled round robin. In his first match he pinned Travis Hendersen (Corona Centenni) in 1:39, and then picked up a 20-4 technical fall over Hunter Hart (Bozeman Mat Dog). Waylon DeCoteau (Turtle Mountain) lost by fall in 1:47 and the only wrestler to not lose by bonus was the bracket’s runner-up David Eusea (Thompson Valley) who was beat by a score of 9-3.

Both Wilcke and Glosser plan to continue their wrestling careers at the University of Iowa under head coach Tom Brands. Glosser projects to wrestle 141 or 149 when he joins the Hawkeyes. Despite Wilcke wrestling 195 for the past year, the wrestler says he intends to wrestle at 184 when he gets to Iowa as opposed to wrestling 197 for the Hawks.