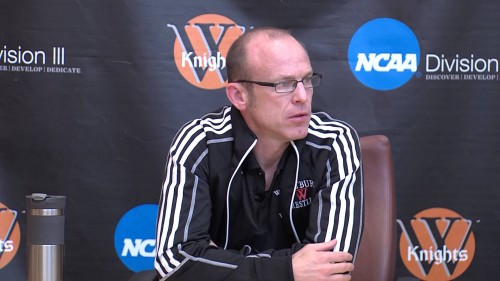 Today D3wrestle.com tabbed Wartburg’s Eric Keller as their coach of the year after he led the Knights top a NCAA runner-up finish last month in Pennsylvania. Keller almost did the unthinkable as he was tasked with winning a fifth straight team title in Division III, but was thwarted by Augsburg on the final day to finish second. Keller started the season needing to replace over 100 of the team’s 103.5 point performance in the 2014 NCAA title run.

Needing to replace nine starters from a year ago, Keller found plenty of stars on his bench as 149 pounders Andrew Steiert and Brandon Welter bumped up to 165 and 174 respectively and both wound up earning top four seeds at this past NCAA tournament. 133 pound wrestler Connor Campo was the only returning NCAA qualifier on the squad, and after going 0-2 a year ago and he turned out an 8th place finish this season. 157 pound wrestler Drew Wagenhoffer came back into the lineup for Wartburg after finishing on the stand in the 2013 championships.

Keller also got some help from 141 freshman Kaz Onoo, who despite him not qualifying for the tournament, was named to D3wrestle.com’s All-Freshman team. Of his nine NCAA qualifiers Keller coached his squad to eight All-Amerian honors, including 149 pound champion and Junior College transfer Kenny Martin. Wartburg finished their dual season 18-1 and dominated their Central Regional by 40 points..

Keller wins the award for the second time in his career, as he was named co-coach of the year with former Wartburg head coach Jim Miller back in 2012.