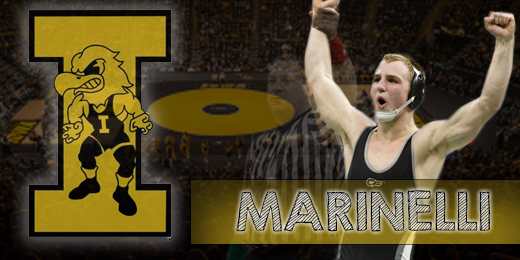 This matchup will be the third #1 vs #2 meeting between high school wrestlers, even though Shields is coming off a loss to Joe Smith of Oklahoma (so his number may dip). The first high school match announced was Justin Mejia taking on Austin Gomez in a battle of the two highest rated 113 underclassmen. With #6 Devin Brown taking out #1 Jabari Moody at the Dapper Dan classic, Mejia has moved up to the #1 spot (unofficially on InterMat – but he is #1 on Flo) and freestyle national champion Gomez sits right behind him.

Earlier this month, AGON made another announcement that 2015 Hawkeye commit Mike Kemerer will look to defend his #1 status against a familiar foe in #2 ranked Fredy Stroker.  Stroker has won the last two meetings with the future Hawkeye, but since this summer Kemerer has really come into his own defeating the #3, 4, and 5 ranked wrestlers in the past two weeks.

Marinelli’s accent to #1 status started this fall when he finished second at the Super 32 preseason tournament behind Fox Baldwin. Baldwin along with then #1 ranked Logan Massa bumped to 170 clearing the weight class out. Marinelli then earned the #1 overall status when he defeated Blair’s Mason Manville in the Ironman finals, a spot that he has held since late December.

This will be a great match on paper, and both recruits have significant impact on their schools recruiting classes. Shields is a part of the #1 ranked team recruiting class that Zeke Jones has scored in his first year at Arizona State. Marinelli, who is a top 10 recruit in the upcoming 2016 class is a big time get for Tom Brands and his staff out of the state of Ohio.

Marinelli is coached by former All-American Jeff Jordan at St. Paris Graham high school, which recently won it’s 15th consecutive team title in Ohio’s Division II class, is stock full of some of the nation’s top high school talent. Marinelli’s main strength is his phenomenal attacks from neutral, as he has utilized double leg, high crotch, and low single attacks against some of the nation’s best competition. Marinelli has also scrambled with the best of them, keeping up with one of the best scramblers on the high school scene in  Florida’s Fox Baldwin.