Hawkeyes sit in second place after the first day 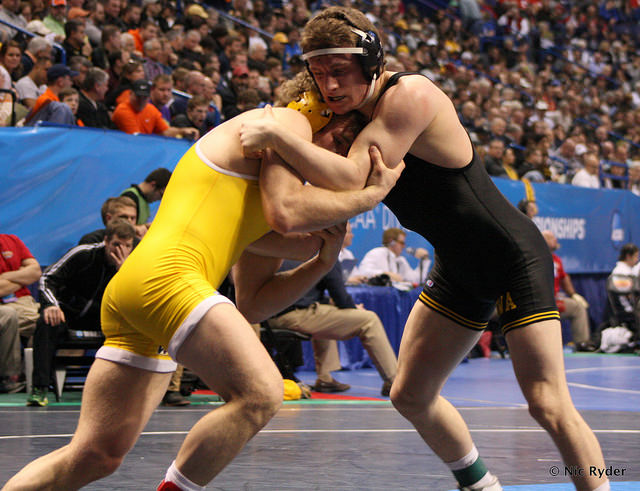 It was a rough day for the Hawkeyes who entered the NCAA tournament as one of the favorites to win the team title, but sessions I and II down in St. Louis were a mixed bag of emotions as Iowa lost four of their NCAA qualifiers in the first round alone. The biggest blow might have been two-time All-American Bobby Telford (285) who lost his rematch with Maryland’s Spencer Myers 7-5 to give him his first loss on the opening round in his career. At large qualifiers Mike Kelly (157) and Nick Moore (165) also dropped their opening round matches, and #5 seed Josh Dziewa (141) fell victim to Kevin Jack of NC State.

But there were some positives; Thomas Gilman (125) opened the tournament up for the Hawkeyes with a 16-4 major decision over Stanford’s Evan Silver. Silver was considered one of the tougher draws at 125 with him being a top 20 ranked wrestler at his weight, but Gilman handled him and then some. Gilman continued on to face Penn State’s Jordan Conaway for the third time this year. The first time the two met Gilman was able to win 6-5 at Penn State, the second meeting was also a one point margin with Gilman winning 5-4 at Big Tens. As expected this was a match that came down to the wire and Gilman was able to hit the score in overtime for the win to punch his ticket to the quarterfinals.

“I’ve got a motor. I knew I could get to him and I had some opportunities, but didn’t quite get there. You can’t get worried and can’t get flustered.” Gilman said, “That’s what we practice for. I mean you don’t want (to win in overtime), but if it comes down to that you want to be able to have that gas tank in the fourth period.”

All-American Cory Clark (133) is also headed to the quarterfinals for the second straight year for Iowa. Clark won an easier than it looks 7-5 decision over Lock Haven’s Ronald Perry and then came out and put bonus points on the board in the next round of Michigan’s Rossi Bruno with a 12-4 win. Up next for the two Hawkeye lightweights are some familiar opponents. Gilman will have a rematch of his Midlands final with Joey Dance of Virginia Tech. In the previous meeting Dance was able to hit a slick takedown in sudden victory to win the match, but Gilman was right there last time. For Clark it will be in-state rival Earl Hall of Iowa State, who Clark has defeated on every occasion, but Hall seems to really have grown as a wrestler since their last meeting.

Two-time All-American Mike Evans (174) returns to the quarters yet again after outscoring his opponents 8-1 in his first two matches. He opened the tournament over Big Ten foe Nathan Jackson (Indiana) with a 4-1 win and followed that with a 4-0 win over Andy McCulley (Wyoming). Up next for the Hawkeye will be a rematch between Logan Storley for the third time year. Evans has managed to pull the last two meetings out with overtime wins.

Sammy Brooks was able to make the quarterfinals at 184 after a major decision and minor upset to reach the aforementioned round. Brooks opened his day with a 10-2 win over Ben Stroh (Wyoming) which set up a showdown between the top two seeded wrestlers from the Big Ten tourney. Previously Domenic Abounader (Michigan) was able to beat Brooks on a late takedown in their dual meeting, but the pair never met at Big Tens. Brooks got his revenge by winning 4-2, but he now has a match with the #1 seed Gabe Dean of Cornell. The last time these two met Dean was the victor 6-2 in the National Duals semifinals, so Brooks will once again be playing the part of the underdog looking for revenge.

Nathan Burak also returns to the 197 quarterfinals after he too opened up his day with back-to-back major decision to be the Hawkeyes current main point scorer. Burak started with a 18-4 win over Vincent Pickett (Edinboro) and then he followed up with a 12-2 major over Jake Tindle (SIU Edwardsville). Burak now will face a tough Kyven Gadson in what is the second in-state showdown in today’s quarterfinals with Iowa and Iowa State.

The backside of the bracket was a mixed bag of results and feelings for the Hawkeyes. Bobby Telford made the displeasure of his first round loss known by pinning J.J. Everard J.J. Everard (SDSU) in the first period to rebound for Iowa. The fall came in just under 40 seconds. Josh Dziewa also was doing his part by getting a major decision over Mike Pongracz (Chattanooga) to stay alive in his final tournament. He now faces a tough rematch with Nick Dardanes (Minnesota), who he beat in the Big Ten semifinals, but is 1-1 in his career against the Gopher. Hawkeye freshman Brandon Sorensen (149) was the only Iowa wrestler to lose his second round match today. He opened his day with a major decision over thei Big Ten 3rd place finisher Kyle Langenderfer (Illinois) and the was dropped by CJ Cobb of Penn in his second match.

Mike Kelly and Nick Moore weren’t able to rebound with victories and both will end their careers in Hawkeye singlets. Moore spent three seasons as the Hawkeyes 165 starter, and filled in as a freshman at 157. He ends his career with a 75-33 career record, including going 25-7 in Carver-Hawkeye Arena. Kelly is made his first NCAA tournament in his second post season run, with his first three years spent at 149 pounds. Kelly ends his career 58-40. but was 23-12 in his final year. A true testament to the sacrifice Kelly made by cutting to 149 for the last three seasons.

Today’s session starts at 10 AM.