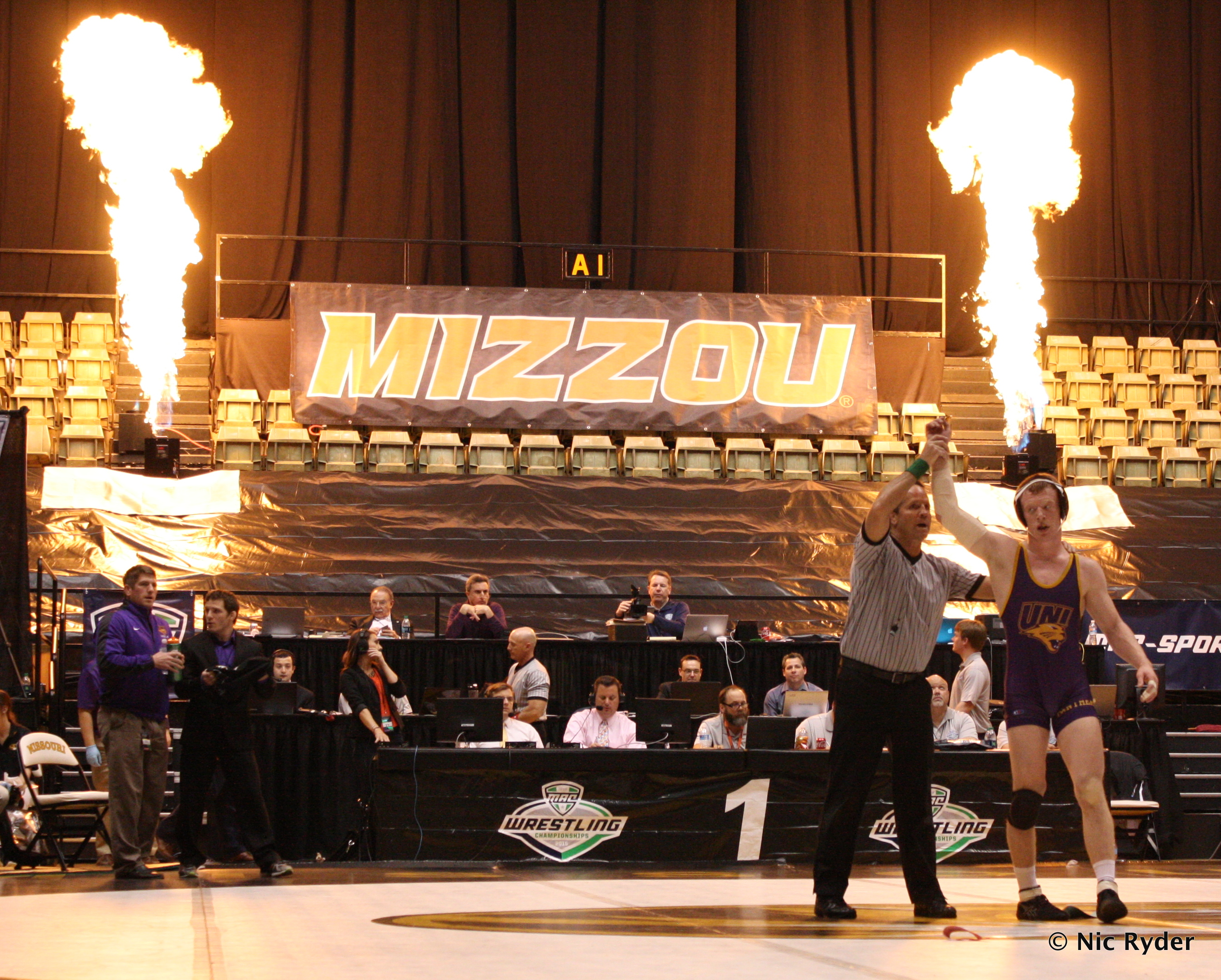 “I just kept my pace higher than his, I knew things were going to fall in,” Moore said after the win. “Not getting worried since things weren’t going right in the first period.”

Moore and Warner were scoreless after the first period, after Warner escaped to start the period, Moore got a takedown and took Warner to his back for a two point nearfall, making it 4-1. Moore would add an escape and another takedown in the third to make the final 7-1.

“He set a pretty good pace, wrestled a smart match,” UNI Head Coach Doug Schwab said of Moore. “He avoided one of [Warner’s] best positions, that roll through single, but he didn’t go there. He hit a great high crotch and ended up getting a two and two. Good performance by him.”

Dylan Peters fought back from a loss in the finals against Alan Waters to beat Northern Illinois’ Derek Elmore 12-1 to secure the second MAC qualifying spot at the NCAA tournament. The match against Waters was Peter’s second loss to the Tiger this season.

“I give him credit, [Waters] came out and hit the low single right away.” Schwab said of the Peters-Waters match. “Really I give him some credit, he caught us twice right off something and boom, he was right back on us (Peters). He didn’t let us get any momentum.”

Blaize Cabell was the other Panther in the finals. UNI’s only number one seed coming into the tournament, he dropped a 4-2 decision to Missouri’s Devin Mellon. Cabell could not get his offense going, and Mellon came right out in the first period for the matches only takedown.

“They obviously came out with a plan, to get to that snatch single right away and then they rode him for a while,” Schwab on the Cabell match. “We have to be able to make adjustments though, they’re making adjustments and we need to be able to do that. I didn’t see Cabell ever really pick up the pace.”

Other Panthers that wrestled today included Jake Hodges, who won his first match in the consolation semifinals 4-3 against Eastern Michigan’s Michel Shaw. Hodges would fall in the third place match, 6-4, to Lavion Mayes of Missouri. Hodges put out a great effort in his match with Mayes and lost on a takedown with one second left in the match.

Jarrett Jensen lost his first match of the day, 6-5, to Cody LeCount of Central Michigan. Jensen led for most of the match, and then gave up a late takedown in the third period to drop to the 5th place match. He would lose that match 5-4, to Brandon Zeerip of Eastern Michigan. Jensen could possibly make the NCAA Tournament still with an at-large selection. He is probably the only Panther to be selected.

Basil Minto would drop his two matches on the day, losing first to Kevin Beasley from ODU 6-3, and then to Anthony Abro in sudden victory 3-1. Minto finished 6th and grabbed the last NCAA Qualifying spot from the MAC.

We’ll have more photos up on our Flickr site later this week, and we’ll also be posting video interviews with Peters and Moore after their final matches of the day today. We’ll also have a short interview with Schwab from after the first round yesterday up as well, be sure to check back!Below are the complete team results from this weekend, and the final team scores.

One thought on “MAC Championship Wrap Up – UNI Finishes 6th”