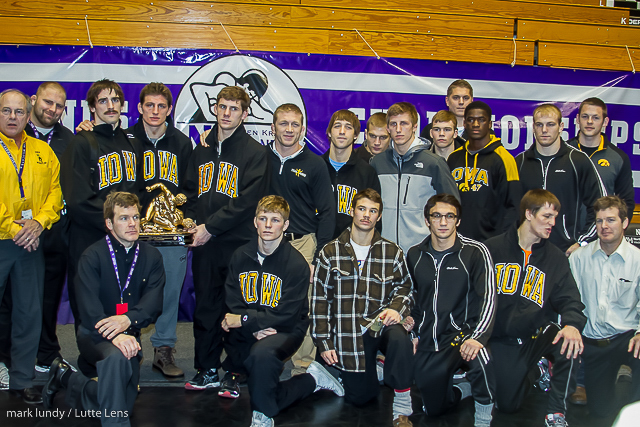 The Iowa Hawkeyes added a Big Ten conference tournament title to their dual team title today, as the #1 tournament ranked Iowa Hawkeyes put up 120 points, which tied them with the Ohio State Buckeyes, who made a late charge to be crowned co-champions. The Hawkeyes got roughed up in the finals, going 0-4, with Telford being the only one to notch a takedown.

It wasn’t the start the Hawkeyes wanted to get off to when Nathan Tomasello of Ohio State got his first career win over Thomas Gilman in the 125 finals with a 3-2 victory. Tomasello was able to pick a late first period takedown over Gilman on the edge of the mat. In the second period Gilman cut Tomasello fairly early to go for the takedown. After racking up shot after shot, Tomasello was eventually warned for stalling, and in the final period Gilman picked up two points – one for an escape and one for stalling, but was unable to get the winning score.

The win by Tomasello closed Iowa’s team lead to just 1.5 points, and All-American Cory Clark was able to stretch it to 2.5 points with his win over Ohio State’s Johnni DiJulius in the third place match by winning 2-1. Both wrestlers will able to get escapes, but the deciding factor was Clark’s ability to get the riding time point in the final period to get the win.

At 141 Logan Stieber showed why he is one of the favorites to win the nations most dominant wrestler award, the Dan Hodge Trophy, when he defeated senior Josh Dziewa for his historic fourth Big Ten title. After taking a 14-1 lead in the first period, Stieber chose neutral to start the second and picked up a takedown to win by technical fall. The win by Stieber pushed Ohio State to a 119-116 team lead.

Iowa then looked to freshman sensation Brandon Sorensen to work his magic yet again while going up against returning NCAA champion Jason Tsirtsis in the 149 finals. After a scoreless first, Tsirtsis was able to get a second period escape for the first points on the match. In the third period, Tsirtsis was hit with a stall warning, but after accumulating riding time, he cut Sorensen to win 2-1 for the final.

The Hawkeyes caught a ray of hope when Nebraska’s James Green defeated Josh Demas of Ohio State, which prevented the Buckeyes from adding to their team lead. Isaac Jordan of Wisconsin then continued to help Iowa’s cause when he defeated his cousin Bo Jordan in the 165 finals, preventing a big four points for the Buckeyes.

With help from their rival teams, Iowa was in a position to make a final push for the team title, with the remaining four weights needing to win out, and Iowa still needing help from McIntosh of Penn State keeping Snyder of Ohio State out of the win column. At 174 Mike Evans needed a big win over Minnesota rival Logan Storley. They were scoreless through the first, and both wrestlers were able to get out from bottom after selecting down. Like last time the match went to overtime tied 1-1, and like last time Evans was the victory – although this time he won 2-1 by getting an escape in the tiebreaks, and then riding Storley out to claim third.

Iowa got a nice gift from Penn State when Matt McCutcheon, who beat Brooks in the quarterfinals, medically forfeited to Iowa’s Sammy Brooks in the third place match to tie the team score 120 between the Hawkeyes and Ohio State. The two bonus points received for medical forfeited was what ultimately put Iowa back in the drivers seat to win it all.

With the tournament on the line for both teams, Nathan Burak and Kyle Snyder each went out trying to clinch the title for their team in the 197 matches. Burak was in on multiple leg attacks on Minnesota’s Scott Schiller in the third place match, but with the match tied 1-1 in the third, Burak took an attempt, but it was Schiller who was able to get the takedown which would be the deciding factor in the match. Schiller won 3-2, but Penn State’s Morgan McIntosh defeated Kyle Snyder 4-1 in the finals keeping the team score 120 all.

With just Bobby Telford left to go for Iowa, Telford had an opportunity to not only win an individual conference title, but his win would also give Iowa the outright team title. Telford looked to be in great shape to win the conference title when he went up 3-0 after a second period escape and takedown. McMullan was able to get out and respond with a takedown of his own to make it 3-3. Telford cut McMullan to start the third period and that was all the Northwestern wrestler would need as he held on to win 4-3 and prevent Iowa from winning the title outright.

Iowa will now turn their focus to March 11th and then March 19th for the final run at the NCAA title. Iowa has assured themselves of eight NCAA qualifiers, with seniors Mike Kelly (157) and Nick Moore (165) needing wildcard to qualify for the tournament. Both wrestlers finished 9th in their respective brackets, and should learn their fate on Wednesday.