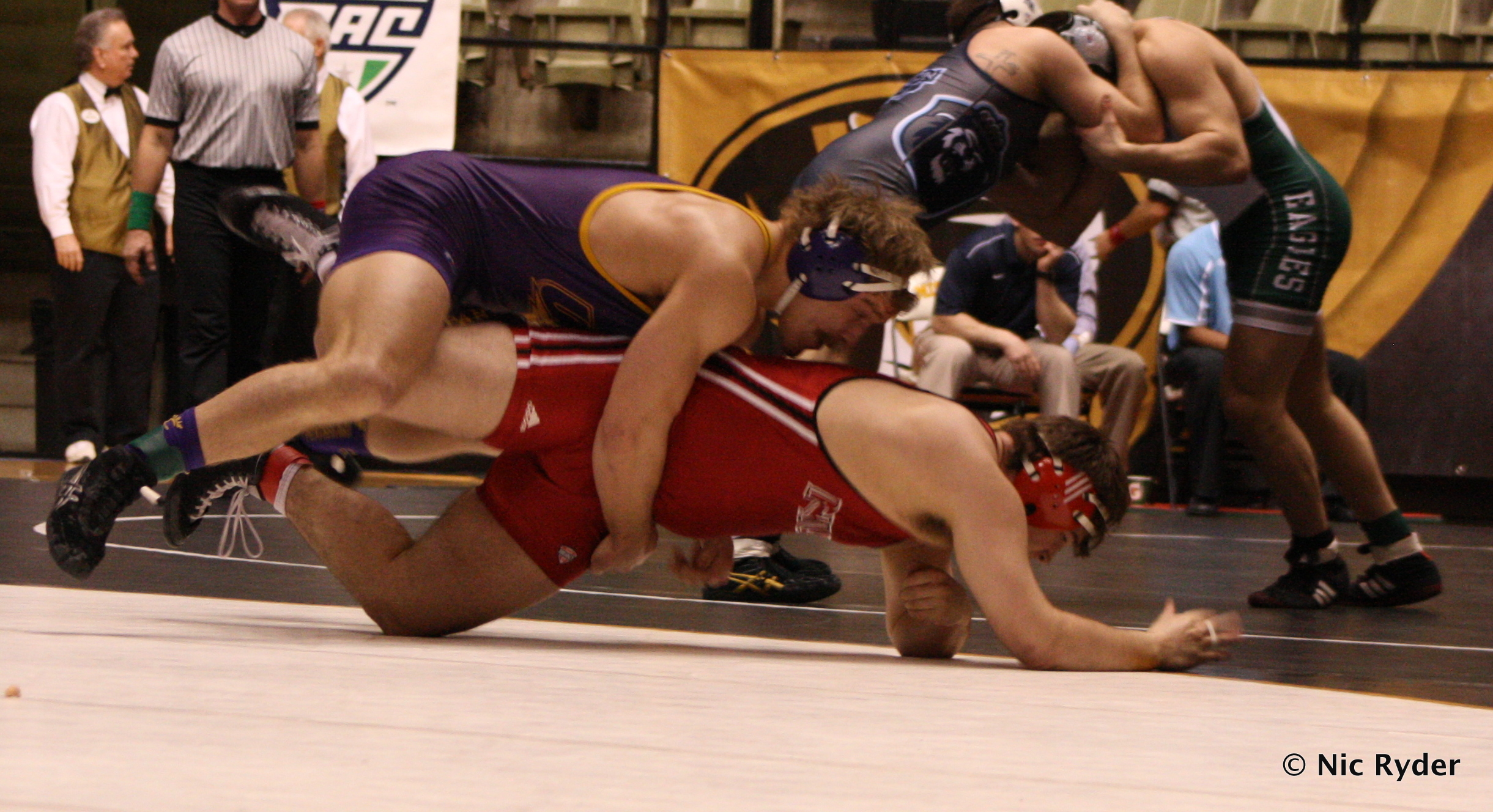 Day one of the MAC wrestling tournament did not go as well as the UNI squad hoped it would. Three men lost their first two matches, knocking them out of the tournament. UNI only has three men in the finals, with the final four on the backside of the bracket fighting for their spots.

“We gave away some matches, got to win those tough, hard fought matches,” UNI head coach Doug Schwab said after the first session. It’s been something he’s preached to his wrestlers all year.

The first round saw some success for UNI; they had five wrestlers advance to the semifinals, three by pinfall. The first, and fastest, came from 125 pounder Dylan Peters, who scored his in 1:31. Jake Hodges was next with the pinfall over Kent State’s Tyler Small in 5:44, and then Jarrett Jensen got the defensive fall on Northern Illinois’ Andrew Morse in 4:39.

“The guy (Morse) made an adjustment, he was able to reverse him (Peters) twice,” Schwab said. “The guy was definitely flat, (the official) game him the benefit of the doubt. He was flat for multiple seconds. Not ideal, but it’s a win and you move on.”

The other winners in the first round for UNI were Cooper Moore at 165, who won 8-1 over Northern Illinois’ Shaun’Qae McMurtry, and Blaize Cabell at 285. Cabell won by major decision, 13-5, over Arthur Bunce.

“Cooper Moore looked good, hit some really nice attacks,” Schwab said of Moore. “He’s as healthy as he’s been all season, it’s not very often that you’re probably more healthy in March than you are in December.”

As for the other five weights, Leighton Gaul, Gunnar Wolfensperger and Curt Maas all dropped major decisions, 13-5, 12-3, and 14-0, respectively in the opening round. At 184 and 197 Cody Caldwell and Basil Minto dropped really close matches. Caldwell was taken down late in the third period by Jerald Spohn from Kent State to tie it up and force sudden victory. Caldwell would give up the deciding takedown shortly thereafter.

Basil Minto needed only to win his first match against Northern Illinois’ Shawn Scott, and he held a 3-2 lead, but again late in the third period he was taken down and ridden out, giving Scott a NCAA qualifying spot.

The second round produced a bit more of the same for UNI. They had three men advance to the finals in Peters, Moore, and Cabell, and had three men bow out of the tournament in Gaul, Wolfensperger, and Maas.

“That guy is tough to score on, we need to be able to open a guy up,” Schwab said of Peters’ 8-2 win. Peters’ did not hit a whole lot of shots during the match. “He gave up one takedown but controlled the match really.” Peters worked hard on top to control the pace of the match.

Peters will face Missouri’s Alan Waters in the finals tomorrow afternoon. Waters won the first match with him 10-1 earlier this season.

“We’ve got to take the firefight to him. He’s crafty, he’s a good wrestler,” Schwab said of Waters. “I’m impressed by some of the things he does, the awareness that he has. If we try to play his game, I don’t like those odds.”
Moore will take on Old Dominion’s Tristan Warner tomorrow for the first place spot at 165 pounds. The Panther beat Harrison Hightower 5-3 in their semifinal match. Hightower came out and scored the first takedown, but Moore reversed him to tie it up in the first. He trailed 3-2 going to the 3rd period, but reversed Hightower again and rode him out of the third for the 5-3 win.

Blaize Cabell was the other Panther to advance to the finals. He won 4-2 over Jacob Henderson. Cabell was a little frustrated by Henderson’s defense; Cabell only hit one takedown in the match, and it came in the third period.

“I’d like to see him expand the gap, give himself some more opportunities,” Schwab said of Cabell. “If you get frustrated by it, you lose your focus.”

On the frontside of the bracket, Hodges lost to the 141 number one seed, 5-3, and Jensen lost to the two seed at 157 3-2. Both weights qualify three wrestlers, so they’ll need to wrestle back and win two more matches to go to St. Louis.

Cody Caldwell and Basil Minto both won their first wrestle back matches, Caldwell won by major decision, 13-2, while Minto won 7-6. Caldwell will need to wrestle to third and he’ll have a chance to wrestle the loser of the final match; either Willie Miklus or Jack Dechow. The true second place winner will receive the NCAA tournament bid.

Minto needs to win his next match to get a guaranteed spot in St. Louis. If he drops the match to Beazley, he’ll fall to the fifth place match, and if he drops that match, he’ll have one last match for the true sixth place spot.

Overall Schwab isn’t terribly happy with the way his team is wrestling. He wants more from all his wrestlers, even the ones who won.

“I’m not going to sugarcoat it with our guys, and they know that. We have to set a higher pace and be freakin physical, SOB out there. We’re either scraping you off the mat because you wrestled so hard, or we’re scraping him off the mat. That’s how I want to see them compete.”

Below are the first matches for the UNI wrestlers and the team points going into the final day. Here’s a link to TrackWrestling, where you can find updated brackets. Here’s a link to the photos that we took during the day!