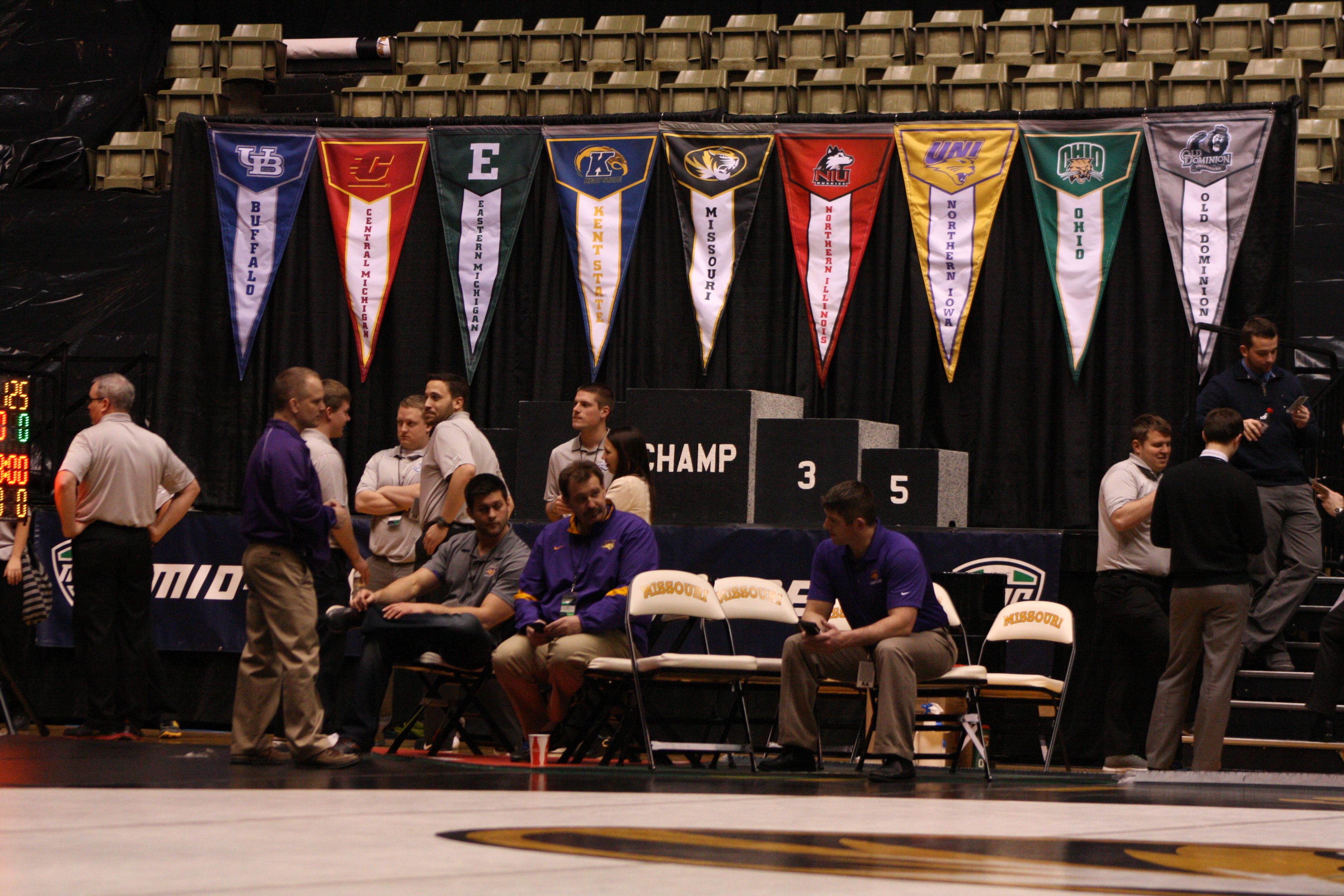 We’re here at the Hearnes Center on the campus of the University of Missouri for the MAC Championship Tournament. We’ll have running results throughout the day, but we’ll primarily be focused on UNI wrestlers. For previews, brackets, and WatchESPN, check out the links below. We won’t be doing a traditional play by play, I’ll just be updating the thread with period results as well as match results as best I can. I’m not 100% sure on how the WatchESPN coverage will go, whether or not they’ll show all there mats, but I’ll list the opening rounds for the Panthers and what mat they are on below.

157:
Jensen up on mat 3, he’s tied at 2 with 2 minutes left in the 1st, he’s on bottom. Jensen not doing a whole lot on the bottom. End of the 1st.
Jensen on top now, he nearly gets a NF2 but no two count. Hecklers are out in full force for Mizzou. And Morse gets a R2, 4-2 he has over two minutes of RT. Restart Jensen sits out, now he sits back and hooks the Morse’s head, he gets the defensive pinfall! Jensen wins by pinfall in 4:38

165:
Cooper Moore won 8-1. Moore look good, not favoring his elbow at all, had some solid takedowns.

184:
Cody Caldwell lost 8-6 in sudden victory. Caldwell gave up a reversal with about 30 seconds left in the third period, that tied it at 6 and erased his riding time. Kent State’s Jerald Spohn hit a double leg to end things in sudden victory.

194:
Basil Minto lost 4-3 to Shawn Scott from Northern Illinois. Minto was up 3-2 with about 15 seconds left in the third when Scott hit a shot and took Minto down and qualify for the NCAA Tournament. If Minto can win his next match, against Jackson Lewis of Central Michigan, he will also qualify.

The semifinals and second round of the consolations are up at 5PM! 5 Panthers are still on the championship side.

Semifinals and First Round of Consolations – Here’s a link to updated brackets
125:
Dylan Peters vs Brandon Jeske (ODU) – Championship side
The scoreboard is right in the way of the mat, so I might miss some action. Not a lot of action in the first period, Jeske with a firmans carry attempt but Peters shrugs off and gets his own T2, 2-0 to the 2nd.
Jesse Down to start, he can’t get out before Peters has RT. Peters working hard on top, but can’t get Jeske turned, he rides him out, 2-0 to the third.

Peters down to start, he stands up and is out, he still has over 2 minutes of RT. Jeske with a nice T2 but Peters is out right away, and Jeske is hit with a stall, that’s his second so it’s 5-2. Not sure what happened there.Peters with a T2 on the edge, 7-2, Schwab yelling at Peters to “Finish it on top!” And Peters does, he wins 8-2 with RT. He qualifies for the NCAA Tournament and will face Alan Waters tomorrow in the finals.

141:
Jake Hodges vs Zach Horan (CMU) – Championship side
The winner of this one goes to the NCAA Tournament. Less than 20 seconds in Horan gets a leg, elevates it and gets the T2. 2-0. Hodges with the E1 on a restart. Sorry I missed some action, it’s5-2 going to the Third.
Lots of rolling around on a shot by Hodges, but he can’t come out on top, he got an E1 to start the third though. He drops the decision 5-3.

149:
Gunnar Wolfensperger vs Colin Heffernan (CMU) – Wrestlebacks
We join this match already in progress as I was watching Moore win. Wolfensperger is down 2-0 with 1:25 left in the first period. And a T2 that I can’t really see (it’s down on the other end of the arena) for Wolfensperger, he’s up 3-2 now and it stays that way to the 2nd.
Heffernan up and out right away, 3-3. He gets a T2 on the edge, 5-3 and an E1 makes it 5-4 to the third.
Wolfensperger is down to start, he’s up and out, 5-5, but Heffernan hits another T2, 7-5 and now he has RT. E1 for Wolfensperger, 30 seconds left, 7-6. He can’t find another shot, he drops the decision 8-6, and he’s out of the tournament.

157:
Jarrett Jensen vs Joseph Lavallee (Missouri) – Championship side
Jensen gives up a T2, wasn’t watching so I’m not sure what happened. 2-0 Lavallee. Restart, and Jensen gets the E1 on a switch, 2-1, 1:30 left in the first. LaVallee is very active, moving his feet and circling. A couple near T2’s for Lavelle, Jensen hasn’t really taken a shot yet, to the 2nd.
Lavallee down to start the 2nd, he gets up and out, 3-1. Not a lot of offense from Jensen, he has a stall warning now too, to the third.
Jensen down to start, He’s up and out on the second RS, it’s 3-2, RT not a factor. Jensen needs to go forward, he’s backing up a little too much. Lots of tie-ups, but not a lot of shots off of those. Jensen nearly with a leg but can’t get it, they shoot each other off. RS, 15 seconds left Jensen still down 3-2. Jensen with a tieup and Lavallee brings him down to the mat, Jensen goes down 3-2.

165:
Cooper Moore vs Harrison Hightower (Ohio) – Championship side
Hightower comes out and gets an ankle, and he gets a no-reaction T2. Moore with the R2 though and it’s tied up at 2. E1 for Hightower on a restart. 3-2 he leads. Both men are going heavy on the head of the other, some half shots, nothing major. Moore with a low ankle, can’t get there, and another, can’t get there, restart, Hightower with a trip-attempt but Moore with a slide by and nearly pins him, but time runs out, 3-2 Hightower leads to the 2nd.
Hightower down to start, Moore working hard on top, he’s got an armbar and is working to turn him but can’t. OOB RS. Off the RS Moore works hard to flatten Hightower out, working to turn again but can’t, it’s 3-2 to the 3rd.
Moore sits out on the restart, scoots back into him and turns to get the R2. 4-3 he leads now and continues to ride tough. Not a whole lot action other than that, Moore just riding very very tough, rides him out of the 3rd, Moore wins 5-3

197:
Basil Minto vs Jackson Lewis (CMU) – Wrestlebacks
Missed the first T2 by Minto due to the Caldwell match, he leads 2-1 with 2:00 left in the first. That’s the score going to the 2nd.
Lewis down to start, he’s up and out, 2-2. Scramble off a Minto shot and he nearly gets the pinfall but gets the T2, he leads 4-3 after giving up the escape before time ran out.
Minto down to start, he can’t get out, Lewis goes neutral on a restart, 5-3, now Lewis is in on a headlock but OOB. 1:13 left. This is where Minto really ran out of gas last match but Lewis takes a shot and Minto circles for the T2. 7-4 after a Lewis escape but Minto has RT now. 30 seconds left, OOB, Minto with a stall warning, Lewis with another shot Minto circles and they stand back up, and Minto will win 7-6 after giving up a very late T2.

285:
Basil Minto vs Jacob Henderson (ODU) – Championship side
Cabell finally up, he had to wait for a 197 match on another mat to finish up. Not a lot of action to start, mostly tie-ups, Cabell took a shot but nothing, 0-0 to the 2nd.
Henderson down to start, he’s up and out quickly, 1-0 he leads. Stall warning on Henderson right as he takes a shot. Cabell still only has two shots on the match, there he takes another but nothing. He trails 1-0 to the third.
Cabell down to start, he’s up and out. 1-1. Cabell with a low ankle pick tries to bring it up but can’t, stalemate. Cabell with another shot and Henderson warned for stalling again, Cabell finishes the double leg and it’s 4-1 now. Henderson gets up and out to make it 4-2, but can’t finish a shot, Cabell wins and will go to the NCAA Tournament