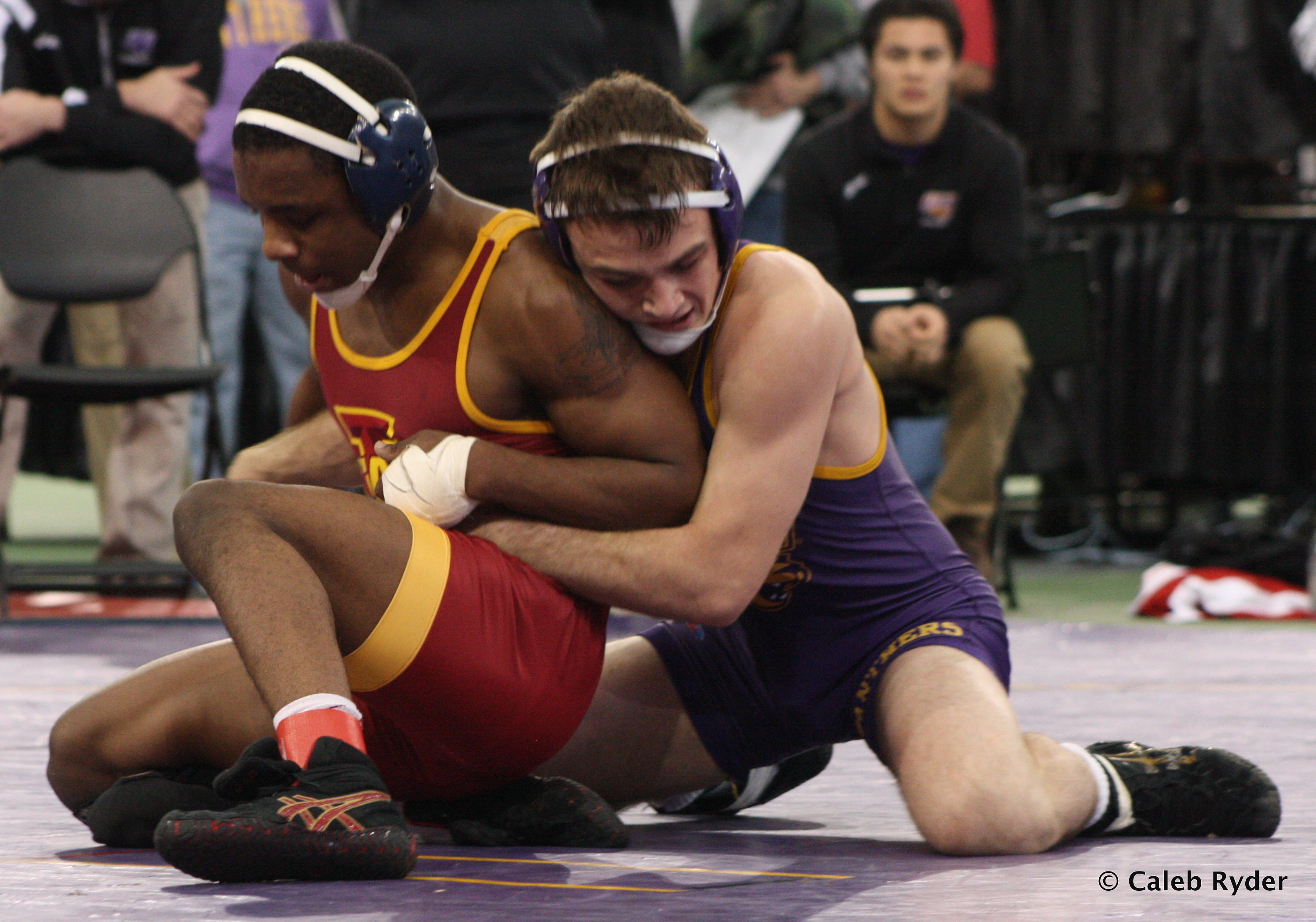 The University of Northern Iowa wrestling squad scored a few victories in Hilton Coliseum, but in the end Iowa State had too much firepower to overcome. The #8 Cyclones won seven of the ten matches, including three by major decision to down the Panthers 24-12 Sunday afternoon.

“We didn’t give ourselves enough opportunities across the board,” UNI Head Coach Doug Schwab said after the dual. “I give them credit. Bottom line is we have to do more.”

Things started off well for the Cyclones, with #12 Tanner Weatherman scoring three take downs against UNI’s Curt Maas. Maas couldn’t finish his shots, and Weatherman capitalized on some half shots and had some good offense to win 7-2.

“I think our goal or our plan, was we should win 8 out of the ten matches. Some outstanding performances,” Iowa State Head Coach Kevin Jackson said after the dual, “Kyven Gadson and Dante Rodriguez continue to impress.”

Lelund Weatherspoon kept things rolling along for ISU, he won a 10-3 decision against UNI’s Kyle Lux. It was a similar match to Weatherman’s, with the Cyclone scoring a takedown in the first period and finished up in the third period with some good offense.

Iowa State’s heavy hitter in #2 Kyven Gadson was up next, taking on UNI’s Basil Minto. Gadson locked in a body to body hold and hit an inside trip to send Minto to his back for a three-point nearfall and was up 6-0 going to the second. Gadson would score at four more takedowns in the match and go on to win by major decision 17-5.

UNI got on the board when #10 Blaize Cabell came out and scored two takedowns against UNI’s Quean Smith. Cabell, the much smaller heavyweight, hit a single leg and switched off to double leg late in the second period. Smith nearly got out, but on review he did not get the escape before the end of the period. Cabell would hit another single leg and win the match 5-2.

Following the heavyweights the 125 pounders took the mat, #6 Dylan Peters went up against ISU’s Kyle Larson with one goal in mind: get the pinfall. Larson took it to Peters for about the first minute and a half of the period, nearly getting takedowns on two separate double leg attempts, while Peters’ wasn’t getting in on much offense.

“The thing about Dylan is he’s got a lot more offense than that,” Schwab said of his 125 pounder. “These guys know it better than that, they watched him pick apart Earl Hall last year, in a dual meet in the West Gym and scored a lot of different things. He wanted to get a pin for the team though.”

And Peters got the fall. With about 45 seconds left in the first period Peters did get his cow catcher locked up and threw Larson to his back and scored the pinfall in 2:57. The fall cut ISU’s lead to 10-9 going to intermission.

That was as close as the Panthers would get however. ISU would get two major decisions over the next three matches, and Earl Hall won 9-3 over Leighton Gaul. Gaul did a good job to fight keep the major decision at bay, but he couldn’t get any offense going. Hall scored takedowns in each of the three periods.

The second major on the day came from Dante Rodriguez, who beat Jake Hodges 14-1. Rodriguez had double underhooks in hit an inside trip to send Hodges to his back, where he held him there for at least a full minute before Hodges fought out.

“I think if we get those falls, the referee calls those falls, it really blows the match score wide open. For some reason, we can’t get a fall in Hilton,” Jackson said. “We had at least six opponents on their back (during the Arizona State dual last Friday).”

#14 Gabe Moreno would get the Cyclones third major decision, taking down Gunnar Wolfensperger 13-4. Wolfensperger came out with a plan, keeping it close in the first period, but he trailed 6-2 going to the third period and that’s when Moreno blew it open, winning 13-4 after two more takedowns and a two point nearfall. Moreno looked good, hitting his shots and being smart on defense, especially in the first period.

The Panthers final win would come at 157, where Jarrett Jensen won 4-2 over Luke Goettl. Neither guy really looked to take a shot in the first period until Jensen went with an outside single leg attempt and scored a takedown with 15 seconds left. Goettl rode Jensen out of the second period, securing riding time for himself, but he couldn’t score a takedown in the third while Jensen hit another. Goettl escaped from that takedown and had riding time to drop the decision.

“It would have been a huge win for Luke, in his bid to qualify for the NCAA tournament. We didn’t get our offense off, we didn’t get a chance to win that match with doing what we do best. It cost him the match,” Jackson said of his 157 pounder.

The final match was the only one that featured two ranked wrestlers, with Iowa State’s Mike Moreno winning 5-2 over UNI’s Cooper Moore. Moore hit a nice outside single leg in the first period, but couldn’t finish it for points before Moreno put a whizzer in and got a stalemate call.

“Cooper’s got to give himself more opporunities to win that match,” Schwab said of Moore. “From the start we were in deep once, and you can’t just expect that one time you’re going to convert.”

The second period saw Moreno get an early escape and again neither man could finish his shots. It was a combination of smart, strong defense and not being overly aggressive. The 1-0 score would carry over to the third period, when Moreno would suck Moore with a claw and seatbelt ride for a three-point nearfall, and while Moore would score a reversal, there wasn’t enough time left for him to get any points.

The Cyclones are next in action this coming Sunday, when they take on Wisconsin at 2PM in Ames. After that are the Big 12 Championships, also in Ames, on March 7th.

UNI hits the mats for the final time this Friday at 7, when they take on MAC opponent Old Dominion. It’s senior night for the Panthers, and their final dual of the year before they go to Columbia, Missouri, for the MAC Championships.

The full results of Sunday’s dual can be found below, and here is a link to Coach Schwab’s post dual press conference as well as Coach Jacksons.