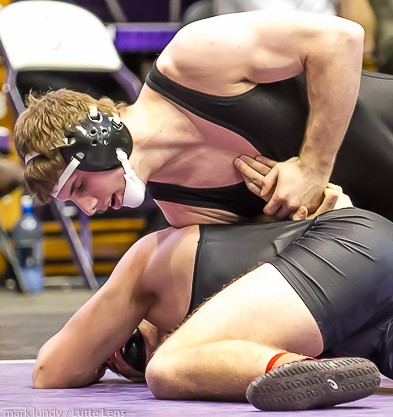 The Iowa Hawkeyes will be advancing to the quarterfinals of the National duals tournament next weekend – which is highly convenient since they are also the hosts – after their 30-6 win over the Virginia Cavilers on Sunday afternoon. This was one of eight regional dual qualifiers, with Hawkeyes likely to be the #1 seed next weekend as they hold the number one spot in the coaches poll.

Phil Laux got the nod for the Hawkeyes at 125 in place of Thomas Gilman, and the sophomore looked better at his more natural 125 weight. After getting a big 6-1 hole, Laux climbed back to make it 8-4 after the first. Hermann finished off the match with a 12-6 decision over the Hawkeye backup, and Virginia took a 3-0 lead to start off.

All-American Cory Clark followed at 133 in what was one of the duals best matchups between him in #14 George DiCamillo and put up a two takedown first to lead 4-1 early in the match. He added three additional takedowns to win the first match by bonus 12-3 to give Iowa it’s first ranked win.

Josh Dziewa then came out at 141 to make it 8-3 for Iowa when he downed Virginia’s #13 Joe Spisak by major decision. Dziewa had five first period pushouts, and left the first period up 3-0 with a takedown and stall point. Dziewa then got a takedown, stalling point, and two near fall points all in one sequence to finish 10-1 for Iowa’s second bonus win on the day.

Brandon Sorensen pumped the crowd up when he picked up a fall over a former top 20 ranked wrestler Gus Sako in the third period. Sorensen was up by double digits before he put Iowa up 14-3.

Mike Kelly then wrapped things up for the first half with a narrow 2-1 decision over Andrew Atkinson to make it 17-3 for the Hawkeyes. That set the score at 17-3 at the break.

Then, what was considered the top matchup in the dual between Nick Moore and #4 Nick Sulzer, lived up to it’s promise as it was a battle that unfortunately the Hawkeye was unable to come out on top. Moore trailed 6-3 after the first, on three first period takedowns. With the score 7-3 in the third, Moore got an escape and a takedown off a high crotch to make the score 7-6. He let Sulzer up to go try and get the match scoring takedown, but was unable to finish with a single leg, and was only awarded a stalling point to fall in his match 8-7.

Alex Meyer started in place of Mike Evans at 174 and was asked to take on another big match with #6 Blaise Butler, and Meyer came through in typical Carver fashion with his third straight win at home winning at the buzzer. Meyer got a big win against Michigan State scoring a takedown at 197 as time expired, and upset then #6 Zac Brunson with a fall with :01 left against Illinois. This time with Meyer trailing 8-6 in the third, he picked up a late takedown to tie the match and then rode Butler out to win on riding time 9-8, for his second upset win on the year in duals.

After a tough 3-1 defeat at the hands of Michigan’s Dominic Abounder on Friday, Sammy Brooks responded in the type of fashion that Hawk fans have grown accustomed to this season when he won 20-7 major decision over Tyler Askey. With that win the score was 24-6, and the Hawkeyes officially clinched their spot in the National Duals quarterfinals.

After a tight match with Huntley on Friday, Nathan Burak won 8-2 over #19 ranked Zach Nye. Burak scored a takedown in each period en route to his big win.

Finally to close out the dual, Kris Klapprodt got the surprise start at heavyweight over senior Bobby Telford, and he went up against Patrick Gillen. After Gillen tied the match 1-1 to start the third,  the action started picking up, and off a reshot Klapprodt was able to score his first takedown. He added another takedown and near fall with short time, and the 197 wound up winning 7-2, to close the dual 30-6.

With the win in hand, it would appear that Iowa will face Chattanooga most likely, as they stand to be the lowest of the teams reaching the quarterfinals.

Results from other regional duals:

Most likely the 8 seed –

Lehigh defeats George Mason 27-9 in first round of National Duals. Your Mountain Hawks will wrestle the second round next weekend in Iowa!

The Gophers defeat NDSU, 26-9, to advance in the NWCA National Duals. #GopherTough pic.twitter.com/A5DHlNGQVj

The Cornell Big Red defeat the Drexel Dragons by a score of 35-6! pic.twitter.com/SFMYLGGXwb

The #Illini advance to next weekend's NWCA National Duals Finals in Iowa City with a 38-0 drumming of Kent State. pic.twitter.com/zFgYzaBDJz