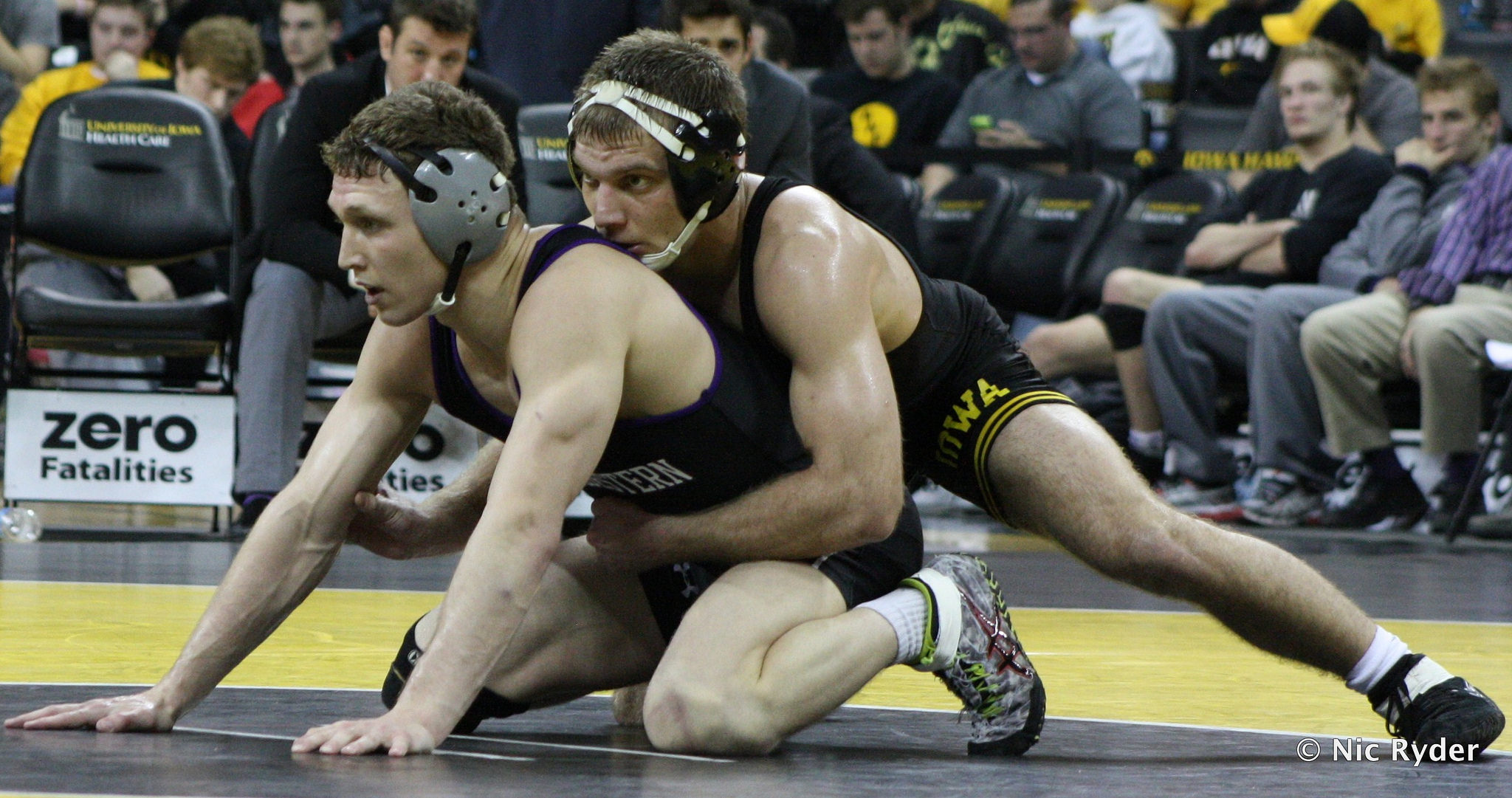 Cory Clark takes on Dominic Malone of Northwestern. Clark will be one of 5 Hawkeyes to have a top 20 matchups. Photo by Nic Ryder

Following Friday’s Big Ten finale against Michigan, Iowa will host the Virginia Cavaliers on Sunday in the first round (regional) of the National duals. The winner will advance to the quarterfinal round the following Saturday at noon, which will also be hosted in Iowa City. The Semifinals will follow on Saturday starting at 3:00 PM, with Finals taking place Sunday (Feb. 22nd) at 11:30 AM.

There will be seven other regional duals, which Nic and I broke down yesterday. The top five dual teams (Iowa, Missouri, Ohio State, Cornell, and Minnesota) will all be vying for a spot in the quarterfinals.

This Virginia squad has had a pretty solid dual season, with one of their bigger wins being a 20-17 win over #14 Edinboro in the Virginia dual semifinals. They also scored a nice 20-15 win over #19 North Dakota State early in the year. It’s not all roses for the Cavaliers though, they have taken two losses to unranked Bucknell (20-16) and last weekend they lost to #25 North Carolina (17-16).

This will be a dual that favors Iowa based on their depth alone. With every wrestler ranked in the top 20 (vs. Virginia’s five) Iowa will be favored in every single matchup except 165, where they have returning All-American Nick Sulzer. Sulzer has only wrestled an Iowa wrestler once, two years ago when he lost to Mike Evans 7-4 (this was before Evans bumped to 174 where he finished that season). Nick Moore just lost a tough match to Garett Hammond of Penn State so he could use a rebound in a big way.

The second big matchup in this dual is at 174 where #6 Blaise Butler will wrestle #3 Mike Evans. Last year Bulter was 13-7 at 157, but since he has bumped to 174 he is now 15-2 on the year. Butler’s biggest win was over #4 Logan Storley at the Cliff Keen-Las Vegas tournament in early December. This is a match that a lot of the national ranking services will be watching, to see how for real Butler is. Evans is also coming off a tough loss last weekend, when #2 Matt Brown beat him 2-0.

Cory Clark will look to get back on track after his last second defeat at the hands of Jimmy Gulibon at Penn State. Clark is currently riding a bad streak, where he is 1-4 against his last top 20 ranked opponents, though to be fair to Clark all of his losses are to top 10 guys. I point to this match because although George DiCamillo is ranked #14, he still is a bad matchup and certainly has top 10 potential. I think Clark gets it done, but this will be a tough match for the sophomore.

Continuing down the top matchups, we could see another good one at 141 if Virginia starts #13 Joe Spisak, but they have been using Justin Van Hoose lately. If Spisak goes I think it will be a good match between two senior wrestlers, with Josh Dziewa having the edge. If it’s Van Hoose I think Dziewa will be able to win comfortably.

The final top 20 matchup would be between #19 Zach Nye and #6 Nathan Burak at 197. Burak is 0-2 in his last two matches, but that’s more of a product of scheduling than how he is wrestling. Scott Schiller (Minnesota) and Morgan McIntosh (PSU) have always given Burak a tough match over the previous two seasons, so it’s no real surprise to see these past two weeks’ results. Hopefully Burak returns to form and gives Iowa a top 20 win.

I expect Iowa to roll at the other weights and possibly pick up some extra points. That would include Thomas Gilman, who has won his last eight matches at 125, with six of those coming by major decision or better. It also includes 184 star Sammy Brooks, who in his last eight dual victories is averaging a win by an average of 10 points.

Big Ten wrestler of the week Bobby Telford, who is 20-1 on the season, will look to get even closer to the 100 wins mark. Currently at 96, a weekend sweep would put him with in two of the triple digit milestone. Gillen is 13-8 on the year, and is riding a three match losing streak.

#16 Mike Kelly is coming off his big win over Luke Frey on Sunday. Not that Frey was a matchup with a highly ranked wrestler, but the win played a major role in the victory. Kelly dropped a few spots in the rankings after losing to an unranked Maryland wrestler, but is 2-2 in his last four matches, with the margin in those losses being a combined three points.

Brandon Sorensen will likely face TJ Miller or Chad Yankowich, and Virginia formerly had a top 20 wrestler in Gus Sako, but he hasn’t wrestled since the Virginia Duals. Preseason this was a match I had circled as what would have been one of the marquee matchups, but without Sako, Sorensen should continue his torrid season.

One thought on “Hawkeyes to host Virginia in Regional Dual”