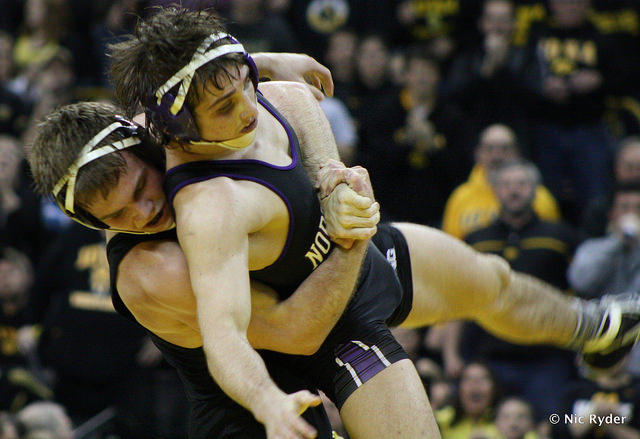 While technically this isn’t the last dual these seniors will wrestle in Carver-Hawkeye Arena (they will face Virginia Sunday, and host National Duals the week following) this was the last official dual for these wrestlers in their home arena, competing for their fans that have watched this former #1 ranked recruiting class for the last five years looking forward to them bringing the Hawkeyes another NCAA title.

They appear to be doing just that, as this senior led squad (half of the starters being seniors) as their 22-9 win over Michigan officially clinched the Big Ten conference dual title for the Hawkeyes. The Hawkeyes are currently ranked #1 by Flo, InterMat, and the coaches poll, and also considered the #1 dual team in the nation.

It seems fitting that Mike Evans would pick up his big win on senior night, earning a 8-3 decision against Jake Salazar. Evans has been one of two four year starters for the Hawkeyes, and he picked up his 98th career win, and 30th inside Carver. Evans was leading 6-3, and hit a takedown with less than five seconds to put the exclamation point on the win.

But not everything was as golden for the Hawkeyes, “Senior night was an extra incentive, and I respect these guys so I wanted to go out with a win.” Burak started. When coach Brands got up to talk, it was a solid eight seconds before some finally asked Brands a question to which he responded, “We got work to do. It was not an inspiring performance for whatever reason.”

In the other big match of the night was between Bobby Telford and #7 ranked Adam Coon at heavyweight, with Coon leading the all-time series between the duo 2-1. Telford unfortunately was unable to get the win, as he was rolled in the TB to lose 3-2. Telford was almost able to get it done in sudden victory, but couldn’t finish when he was in deep on the leg. Coon hit a reversal in the final tie break ride out to win.

The dual started at 125 where Thomas Gilman met #20 Conor Youtsey. Youtsey knows how to keep a match close, but after fading late in the third period in his match with Penn State, Gilman appeared to be determined to put on a show of his own, as he won 6-1 over Youtsey, led by his two takedown second period.

Cory Clark should have had one of the duals biggest individual matchups taking on #9 Rossi Bruno at 133, but instead saw a senior Zebulon Hilyard. Clark picked up four first period takedowns en route to his big major 14-3 decision victory.

Senior Josh Dziewa took on George Fisher at 141 and he was able to get a win on senior night as well for the Hawkeyes picking up a 6-0 decision which put the team score at 10-0 after opening with three consecutive wins. Dziewa’s five point second period was just broke the Michigan freshman, who had been on a few shots, but could never finish against the Hawkeye.

#13 Alec Pantaleo was expected to be a good matchup for Brandon Sorensen as both wrestlers utilize the tactic of wearing down opponents to capitalize on late match mistakes when their opponent is tired. Tonight it was Sorensen who was able to wrestle “the game” better as he came out on top 2-1 with riding time being the decing factor. Neither wrestler was able to really penetrate the legs to score.

Another senior Mike Kelly went to battle at 157 with #10 Brian Murphy, but was just out matched in his senior night matchup. Kelly was tied 2-2 at one point in the second, but gave up a takedown in the second, reversal in the third, and riding time to lose 7-2, giving Michigan their first win on the night.

The final senior in tonight’s lineup followed Kelly’s match by collecting his 70th career win over Garrett Sutton. Nick Moore picked a big win over Michigan’s new 165 (Massa weighed in at 174) with a 6-1 decision.

Sammy Brooks then lost a tough match at 184 to Dominic Abounder, 3-2. With the score tied 1-1 in the final period, Abounder was able to take Brooks off a reshot to get the win, making the score 22-6.

If you aren’t sensing the common theme, #6 Nathan Burak also had a tight win, in what was also considered to be a tight match going in between him and #8 Max Huntley. They were also tied 1-1 in the third, but needed sudden victory to decide it. It was there Burak hit a big takedown to Huntley’s back to win 5-1.

NOTES: Attendance was 8,319… Iowa (14-0, 9-0) won the regular season title outright for the seventh time since the Big Ten started recognizing a dual champion in 1999.