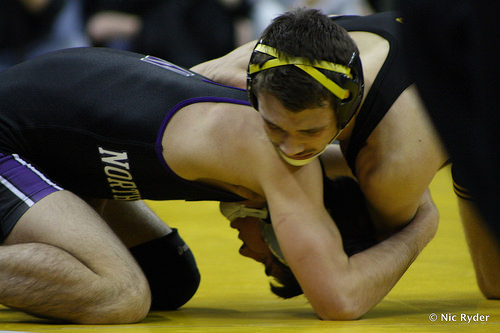 With their lopsided 33-3 win over Maryland, the Hawkeyes will look to clinch the Big Ten conference dual title tomorrow against Penn State at the Bryce Jordan Center. This will be the 37th meeting between the two teams with the all time record standing at 26-8-2 in favor of Iowa. Iowa’s head coach Tom Brands is also 6-2 all-time against Penn State’s head coach Cael Sanderson.

When you have two teams this highly ranked, you expect there to be a ton of great individual matchups, and the great thing about Sanderson taking over Penn State is that virtually every weight should feature two top 20 wrestlers squaring off. This current group of Hawkeye seniors are 1-2 against Penn State, picking up a 22-16 win in Iowa City as sophomores (2013). There are also two wrestlers on the roster (both seniors) who are from Pennsylvania who will have a homecoming of sorts, Josh Dziewa and Mike Evans.

In a lineup full of elite wrestlers, it is still hard to point to any other match than the 174 meeting of Mike Evans and Matt Brown as the duals feature bout. This would be the seventh meeting since both wrestlers took over the 174 spot in their teams’ lineups, and it should come as no surprise that the series stands at 3-3, with Brown picking up the most recent victory at the NCAA championships in the fifth place match. After a major decision last night Evans pushed his record to 20-0 and  is the only Hawkeye that remains undefeated on the season.

Although if you wanted to say that the match between #6 Nathan Burak and #4 Morgan McIntosh at 197 is your pick for the dual’s feature bout, I won’t be complaining. The two wrestlers met twice last season at the Big Ten and NCAA championship tournaments with McIntosh taking both meetings. In the first meeting McIntosh won 3-2 on the tiebreaks, in the second meeting he also won narrowly 3-1. At the end of last year we saw Burak really start committing to shot and then being able to finish them. A win by Burak on Sunday would be a huge blow to Penn State as it is one of the two matches they are favored in.

Going to the list of great matchups, the next one that catches my eye is #3 Cory Clark vs #7 Jimmy Gulibon at 133. They haven’t wrestled since both enrolled in college, but the last meeting between these two was a 2012 10-3 decision by Gulibon in the Dapper Dan All-Star dual in high school. Since then Clark has had the more successful college career picking up a win over NCAA champion Jesse Delagdo as a true freshman, and then reaching the podium at the NCAA championships as a redshirt freshman. Gulibon had a rocky freshman season, but this year has shown more consistency, and that is reflected in his top ten ranking. Brands always talks about matches where they “owe the guy” or how each dual has “ranking or seeding implication” matches, and I think this will be one of those matches.

Sticking with the lightweight matchups the meeting between #8 Jordan Conaway and #5 Thomas Gilman at 125 is expected to be a good match. Gilman is 21-1 on the season, with his lone loss coming against Joey Dance of Virginia Tech. Conaway just happens to own a victory over Dance, and boasts a 19-3 record on the season himself. Since the loss in the Midlands finals, Gilman is 7-0 picking up bonus wins in six of those matches.

Senior Josh Dziewa will look for his 20th win on the season at 141 against unranked Kade Moss. This is the first of three matches where they Hawkeyes are expected to be heavy favorites over their Penn State counterparts. Moss may not have the best record, but he has shown that he has the ability to pull an upset, like he did when he won 6-3 over then top 20 ranked George Fisher of Michigan.

The rankings suggest that #2 ranked freshman Brandon Sorensen should be heavily favored over Penn State’s #18 Zach Beitz, but Beitz is known for being able to keep matches close. Sorensen is coming in red hot on a nine match winning streak including the upset over the returning 149 NCAA champion Jason Tsirtsis a few weeks ago.

Nick Moore is the final Hawkeye who should be the heavy favorite on paper when he takes on unranked Garett Hammond in the 165 match. The Penn State freshman comes in with an 18-9 record, with a 4-3 Big Ten Dual record. Since Moore’s two week hiatus following his loss at Ohio State, he has since returned to the lineup to upset then #6 Pierce Harger of Northwestern, and has scored 12 team points in his last two duals.

Iowa will also be the favorites in their matches at 184 and 285. Sammy Brooks is 19-2 on the season, with Nolan Boyd being his last defeat in Stillwater at the Oklahoma State dual. Brooks is the ideal of aggressiveness and pushing the pace as he has two major decisions during his four match win streak. Sometimes that aggressiveness gets him in to trouble as we saw in his last match with Boyd, and then again last night against his Maryland opponent. When Brooks was up big he was thrown to his back for a takedown and two near fall points to let his guy back in the match. Brooks still wound up winning comfortably, but he will need to be a lot more crisp in his matchup with Matt McCutcheon.

#3 Bobby Telford will the either face #6 James Lawson or Jon Gingrich who are both pretty even in terms of talent, which means if the backup for Penn State goes, don’t expect a drop off from a top ten wrestler. That being said Telford should continue his strong season as he looks for career win #96.

The final match will feature Hawkeye #14 Mike Kelly against either #8 Dylan Alton or Cody Law. Even with his upset loss last night against Maryland, Kelly should still be the favorite if Cody Law takes the mat for Penn State. However, if Dylan Alton is indeed healthy he will give Penn State their first strong favorite on paper. Kelly should still be able to wrestle a competitive match with Alton. Outside of three pins, all of the remaining seven matches Alton has wrestled in have been decided by four points or less, with a majority being a takedown margin the difference.

This could be a big dual win for the Hawkeyes, or Penn State could play spoiler and steal a few matches to make the dual closer. Not only would the win clinch the Big Ten dual title for the Hawkeyes, it would also be their fifth top 10 dual victory on the season, with still matches against #17 and #13 remaining for certain on the schedule. After what Brands considered a sloppy performance against Maryland hopefully the Hawkeyes come out firing on all cylinders looking for a big win.