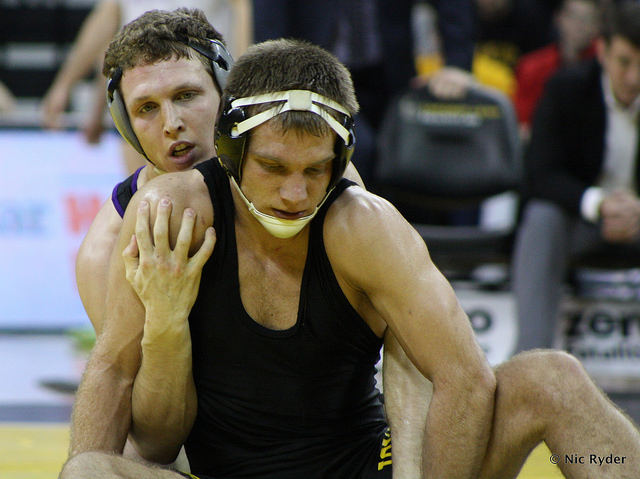 For the first time in over a month, the Iowa Hawkeyes will not be facing a top 15 dual team when they travel east to face new Big Ten foe the Maryland Terrapins. In their first year in the Big Ten, the Terrapins have struggled as they are still searching for their first conference dual victory.  During that stretch the Terrapins have struggled only winning 8 of their last 40 individual dual matches. The Hawkeyes have won the only two meetings between the schools, with the most recent being a 34-6 victory in 2009.

With the #6 Penn State Nittany Lions dual just two days later, don’t be surprised if head coach Tom Brands doesn’t opt to wrestle a few backups in this matchup in Maryland. This team has already ran the gauntlet of big dual meet tests, with most of them being on the road. With one big matchup to go, it may be a smart move to go with rest a starter, and go with a backup. Of course when you have a backup like Alex Meyer, who beat a top eight ranked Zac Brunson a few weeks ago as, your backup Iowa will still expect to try and win ten matches.

Thomas Gilman will look to continue his strong season as the sophomore is now 20-1 and 11-0 in duals. Gilman will face Josh Polacek at 125, a junior who is 6-10 on the year, with two wins coming by forfeit. Last Friday we saw Thomas Gilman pour on the takedowns to score a bonus point win over the Gophers, and I think as Gilman tries to assert himself as a leader on this #1 ranked team, he will look to try and win big again this weekend.

All-American Cory Clark will have one of the duals only matchup between top 20 wrestlers when he meets #20 Geoffrey Alexander. Clark comes in with a 16-3 record, with all three of his losses coming within the last five duals. Alexander enters with a 12-6 record, with his only Big Ten win being over Northwestern’s Dominic Malone 8-0.

Following Clark’s matchJosh Dziewa will take on Shyheim Brown at 141, who was a formerly top 20 ranked wrestler. The pair bring pretty similar records into the meeting with Dziewa being 18-5 and Brown being 17-9. Both wrestlers squared off in the Midlands consolations with Dziewa taking the match 4-2. With unranked Kade Moss slated to start on Sunday’s dual, this should be Dziewa’s toughest match of the weekend.

Brandon Sorensen will continue his scorcher of a season as he leads all Hawkeyes with 25 wins and his last loss to #1 ranked David Habat of Edinboro in the Midlands semifinals. Sorensen’s 149 opponent is listed as Ben Dorsay, but Shane Arechiga has received a few spot starts for Maryland over the last few duals.

Expect seniors Mike Kelly and Nick Moore to look for dual win number eight on the year at 157 and 165 respectively. Moore was the spark plug for the Hawkeyes last Friday as his pin over Minnesota’s Brandon Kingsley set the Hawkeyes off on a 12-0 run to start the dual. Mike Kelly also provided dramatics in that dual, as he carried a lead into the third period over top ranked Dylan Ness before falling in the late seconds of the match.

Undefeated Mike Evans is a possibility to take the mat at 174 for the Hawkeyes as he continues his quest for 100 career wins (currently sits at 96) against Josh Snook. Although with a matchup with #3 ranked Matt Brown looming on Sunday vs Penn State, it wouldn’t be a shock if Brands went with talented sophomore Alex Meyer. Sunday’s match for Evans will have even more significance, as it will also be a match in the Hawkeye’s home state. Meyer has been called upon twice this year for Big Ten duals, picking up wins at 174 and 197.

Sammy Brooks will try and push his undefeated Big Ten dual record to 7-0 against Tony Gardner at 184. Gardner has a 0-11 record on the year and has lost seven of those matches by bonus points. Last weekend Brooks finished a takedown shy of getting a major over #11 ranked Brett Pfarr of Minnesota.

At 197 I would not be surprised to see #6 Nathan Burak or Kris Klapprodt for the Hawkeyes. Penn State boasts #4 ranked Morgan McIntosh for Sunday’s dual so it could be another scenario where Brands may look to rest his starter and go with Klapprodt, who is 2-3 in duals for the Hawkeyes this season.

The final match will be the only other top 20 matchup between #2 Bobby Telford and #13 Spencer Myers. Myers has wrestled a limited season thus far with a 4-1 record to this point in the season. His only loss came to Brooks Black of Illinois last weekend. Telford’s only loss on the year has been to Mike McMullan of Northwestern at Carver. Telford is looking for his 20th win on the year, and 95th carer victory.

One thought on “Iowa heads to Maryland for first conference meeting”