Panthers Head to Athens to take on Ohio 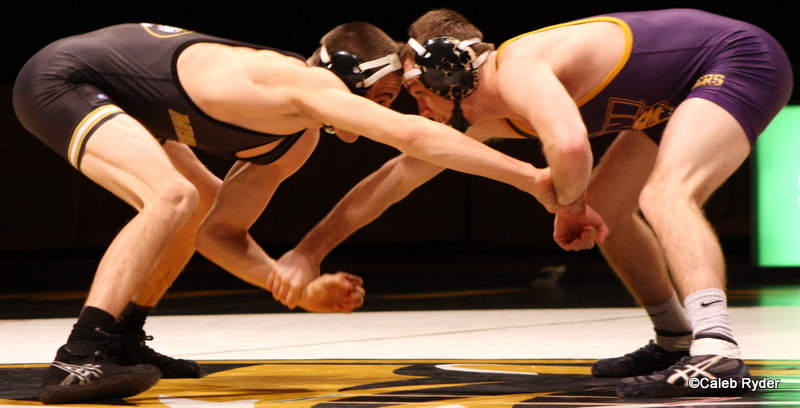 The University of Northern Iowa wrestling squad will look to turn its road fortunes around when they go on the road to Ohio this weekend. UNI will take on the two teams tied at fourth in the MAC this weekend, the Bobcats of Ohio this Friday and the Golden Flashes of Kent State on Sunday.

That gives each team the chance for some upsets though. at 149 Gunnar Wolfensperger gets the chance to earn his first upset victory of the year against a nationally ranked wrestler. Taiwan Claxton is 26-4 so far this year, with three of those losses coming to ranked foes. If Wolfensperger doesn’t go this weekend, look for Tyler Patten to take his place again. Patten was in the lineup against Missouri last week, dropping a major decision to #5 Drake Houdashelt.

Curt Maas will get number eight Cody Walters at 174 pounds. Walters sat out Ohio’s dual last week with Old Dominion, but I would expect to see him back in the lineup Friday. Walters has only two losses on the year, both coming to Michigan’s Davonte Mahomes last November. Although Walters has not wrestled the top competition this year, he is still a tough opponent and this will be a tough match for Maas.

At 197 Basil Minto will get #17 Phil Wellington. Minto came out firing against the defending NCAA champion J’den Cox last week at Missouri, but Cox turned out to be too strong for him (and all his opponents so far this year) and won 16-4. Minto has looked a lot better as of late, but he has yet to put a full seven minute match together. Is this the dual when he does and scores that upset victory?

Cooper Moore, the 12th ranked wrestler in the nation and number one in the MAC, gets the third ranked MAC wrestler in Harrison Hightower. Moore has been dealing with his right elbow injury all year, and fought through it again last week to win at Missouri 4-3 over unranked Mikey England. He’ll have a tougher time this week in Hightower, but if Moore can get on his offense and finish shots he should win this match.

This won’t be an easy dual for UNI to win. The Panthers are 2-5 in duals away from the West Gym and 1-4 against Division I teams. Coach Schwab knows that his team has struggled on the road, and he addressed that (again) at his weekly press conference, which you can find below.

We’ll have a separate preview for the UNI/Kent State dual up later this week. Unfortunately the Ohio dual will not be televised, we’ll do our best to update you with match results as they are finished. The projected lineups for the dual against the Bobcats is below.

2 thoughts on “Panthers Head to Athens to take on Ohio”