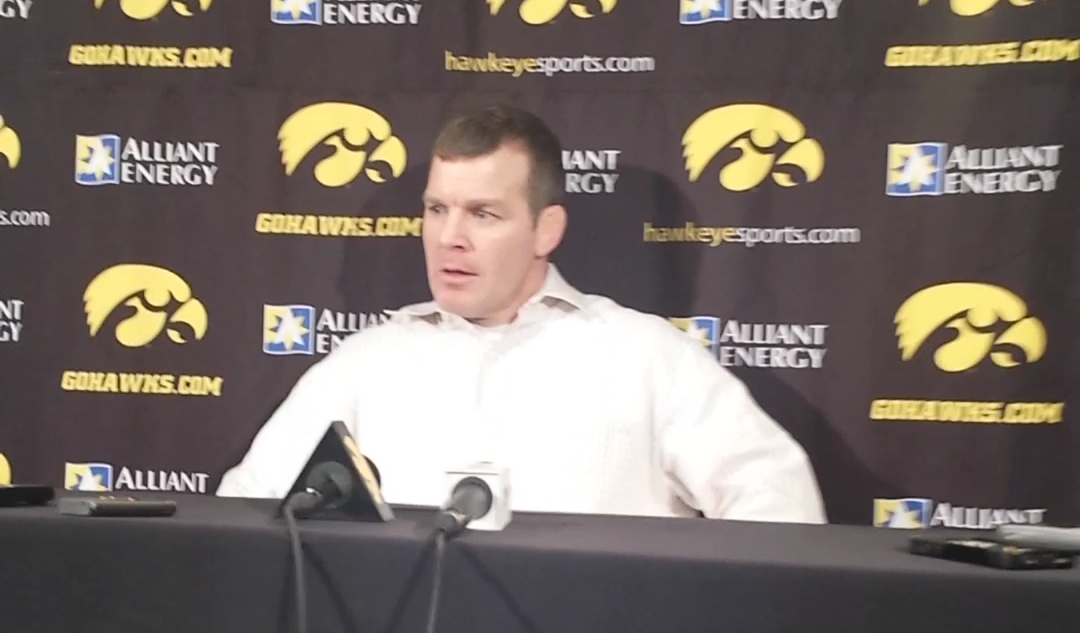 Q: Do you think the score is indicative of how your team wrestled tonight?

Brands: Yeah, there is probably some mismatches there in the rankings, you’re supposed to roll like that. There were three matches that we pointed toward, and we won two of them. Actually there is ten (matches). That’s how it is every week.

Burak stay on your feet your finish. Lesson. Burak can go to both sides of the body, finish the first one when he had that single leg. Telford, don’t let the guy roll, he’s gotten better there. A lot better there the last couple years. He had situations where he had a leg up in the air, but he’s not letting guys roll. This is an agile heavyweight. I am not saying it’s a lesson, but that’s what I am taking away from it.

We got a guy upstairs that’s not taking it well and he shouldn’t and I am not taking it well either. But that’s a lesson, and we’ve gotten a lot better there since he came on campus. Because he is an aggressive heavyweight, he’s going to give himself opportunities in on the leg. And some of these guys are going to go desperation. The thing about it is when you got a guy who rolls, you want him to roll because when you’re ready you pack him.

Brands: Our team? Good. I think Sorensen can get to the guy, just a little bit more combination type stuff. Moore changing speed I guess and angle, speed angle and level. And I think (Moore) can get to him. Kinda like when Brooks got to his guy. Where you stay down lower on the leg and when you drive you get two hands on the leg, and then you get to the angle. We’re kinda trying to get up around the hip more and driving straight in. I think we can get better angles there.

That’s a big win (149). I told the radio (interview) I like the fact that end we got it won because of riding time, it’s that second cycle through the overtime. He’s on his feet and instead of him kicking him away, we pick him up and return him to the mat. That’s how you win big matches. There’s no question. Pick him up and down on the mat.

Q: Tom you were looking for separation at (149), what have you seen since January?

Brands: Well I think when you get an opportunity you seize it and that’s what (Sorensen) has done. Good, good for him. It’s good for the weight class. That’s not a reflection of Brody Grothus. We still got a guy there, he’s got a couple different options. We got keep getting better there, building from that injury. He’s been live this week. We’ll keep him moving forward as well. But Sorensen has done a good job obviously with his importunity. That’s what you want, and that’s what you want from young guys.

Q: What did you think about Moore coming out and doing well?

Brands: I think you look at Moore and it was on his shot late and we score. I think we got him one other time and maybe another time, we were basically one for two, or one for three. Our snaps are strong, he’s strong. That was a match that we pointed to and we owed him a little bit from the Midlands. That helps us for the end of the year for seeding at Big Tens and rankings and that’s what we gotta do. You give yourself an opportunity when your in on that leg, seize it.

Q: Sorensen wasn’t terribly happy with how he wrestled Tsirtsis. Is that sort of encouraging that he can beat a guy like Tsirtsis at his own game?

Brands: Absolutely, and that’s a good point. That went to the very end and the only way that match is going longer is if you got riding time at zero. That’s something that you point toward, and (Tsirtsis) kinda become an expert at that, and he’s made a living off that. But again, we said, “Hey it doesn’t have to be that close and it doesn’t have to go to the end like that”. I know we can score takedowns, we have good offense.