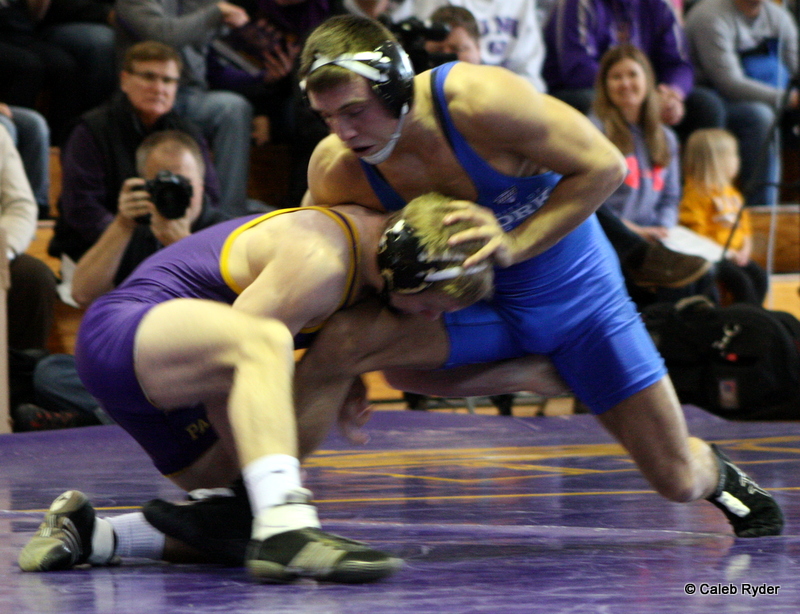 UNI dropped their first away MAC dual of the year to Central Michigan. The Panthers fall to 6-5 on the year and 4-1 in the MAC. UNI won only four matches in the dual.

Dylan Peters got things off to a good start for UNI, beating Brent Fleetwood 8-3 in the opening match. Peters scored nearly at-will against the Chippewa, using a low ankle pick to score two takedowns in the first period, but only once more after that. Peters would add an escape and a point for riding time for the final win.

At 133 Leighton Gaul did a good job of fighting off a single leg attempt by Tyler Keseiring in the first period. It seemed like Gaul was fighting off the shot on the edge for a full minute before getting a restart. Gaul couldn’t take advantage though and fell 5-1.

The first of two possible upsets for UNI saw Jake Hodges drop a close match to #11 Zach Horan 3-2. After an escape in the third period they were tied 1-1, but then got taken down and could not find a shot of his own to fall 3-2.

The second match against a ranked Chippewa was an opportunity for Gunnar Wolfensperger to climb in the rankings, as he was taking on #15 Colin Heffernan. Heffernan exploded in the first period for a takedown on the edge that caught everyone, including Wolfensperger, off guard. A reverse for Heffernan in the second after he started on bottom though gave him a 4-0 lead going to the third, and Wolfensperger could not find his offense and would fall 5-1.

At 157 pounds UNI had another scoreless first period, when Jarrett Jensen and Cody LeCount would go 0-0 to the second, and after trading escapes 1-1 going to the third. Again however the Panther could not find his offense, and going into sudden victory Jensen had maybe three shots the entire match. He took one bad shot early in the overtime period, and LeCount was able to scramble around for the takedown and win the match 3-1.

Cooper Moore put UNI back on the winning side of things with a 6-3 win over Jordan Wohlfert. Both men got off to a sluggish start, going 0-0 in the first, before Wohlfert would score an escape and then Moore would hit an ankle pick for his first takedown of the match. Leading 3-2 going to the final period, Moore would score another takedown in the third and with riding time win 6-3.

Curt Maas lost 11-2 to Jordan Ellingwood. Maas could not find his offense his only two points came as escapes and Maas gave up a three point nearfall in the second before the period ran out.

At 184 pounds CJ Brucki beat Cody Caldwell 9-4. Again the Panther gave up a two point nearfall after getting caught in a scramble situation off of a shot by Brucki. Caldwell only trailed going to the second period though 5-3, and 5-4 after an escape in the second, but he had been ridden enough to give up riding time, and that was all the points he would score.

Basil Minto continued his winning ways with an 8-2 win over Jackson Lewis. This was a rematch from a year ago that Minto lost. The Panther looked good in this match, get a three point nearfall after starting the period in the top position and riding Lewis out. Minto started down in the third but Lewis went with the optional start giving Minto a 4-0 lead. Lewis would hit a takedown, but cut Minto, and Minto would add another takedown and a riding time point for the 7 point decision.

Blaize Cabell again put on a takedown show, scoring five in the first two periods against Adam Robinson. Cabell and Robinson did not look especially interested in scoring any more though in the third, and the final would be 11-6.

The Panthers are next in action this coming Saturday, again on the road but this time at #3 Missouri. IAWrestle will be at the match for you with live updates, and we’ll have a dual preview later this week, so check back!