Hawkeyes use a pair of upsets to fuel big win over Northwestern : 38-3 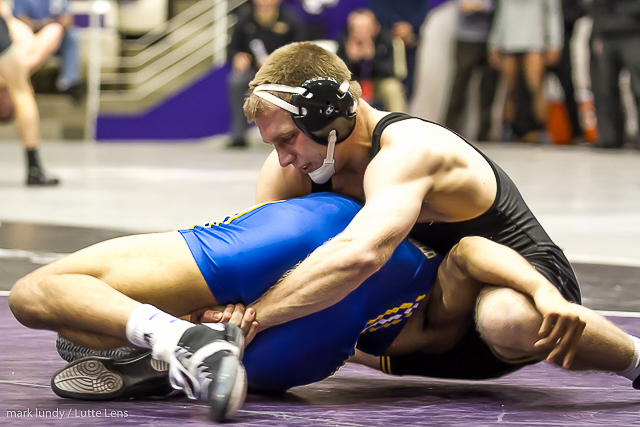 It was a big night for the Iowa Hawkeyes as they won nine of ten bouts (well eight of nine technically – forfeits), with two of those wins coming by upset coming from freshman Brandon Sorensen at 149 and senior Nick Moore at 165. The final tally was 38-3 with Northwestern avoiding the shutout on the last match of the night.

Coming into the dual, head coach Tom Brands indicated that he pointed to three matches, 149, 165, and 285. At 149 former Big Ten wrestler of the week and #3 ranked Brandon Sorensen would be facing #1 ranked Jason Tsirtsis. Tsirtsis was riding a 40 match winning streak coming into the dual, he also had a fantastic freshman campaign winning Big Ten and NCAA titles last year. But last night Sorensen defeated Tsirtsis by wrestling “Tsirtsis’ way” with a win in the ride outs.

The dual got underway at 125 where sophomore Thomas Gilman used a slew of takedowns to earn a second period technical fall 21-6 over Garrison White. Fellow sophomore Cory Clark followed with a bonus win of his own at 133 when he pinned Dominic Malone in the closing seconds of the first period to put Iowa out front 11-0 in the team score.

Senior Josh Dziewa picked up a 6-0 win at 141 to move the team score to 14-0, with five of Dziwa’s point coming in the first period. Dziewa scored a takedown and three near fall early in the match and never gave up control.

Following the 149 upset of Sorensen over Tsirtsis, senior Mike Kelly earned another technical fall for the Hawkeyes with a 18-3 drubbing of Ben Sulivan at 157. For Kelly it was a big rebounding win from receiving a technical fall last weekend from Illinois freshman sensation Isaiah Martinez.

Coming out of the intermission senior Nick Moore (165) had his big matchup with Pierce Harger, the wrestler that beat him in the semifinals of this year’s Midlands tournament. Moore’s escape was the only score through the first two periods, but a Harger reversal and then Moore escape knotted the match at 2-2 and they headed to sudden victory. Moore looked fairly fresh in the overtime portion of the match pushing the pace looking for his opportunity and when he took his shot he came out on top with a takedown to win 4-2 and get a bit of revenge.

“You look at Moore and it was on his shot late and we scored.” Brands said of the return of senior Nick Moore to the lineup.

At 197 Nathan Burak got the nod and after a first period takedown by Polizzi, Burak found himself having to come from behind to win. Trailing 3-1 in the third period, Burak used an escape and last second takedown to take the lead 4-3 for the victory. Burak was in on numerous shot attempts, and finally finished in the third.

The final bout and one of the three feature bouts was a Midlands final rematch between #1 Bobby Telford and #4 Mike McMullan. Each wrestler traded escapes in regulation to head to overtime 1-1. They went scoreless through sudden victory and then each wrestler proceeded to ride the other out in the first set of rideouts. In the final sudden victory period. Telford and McMullan showed a lot more action, with Telford getting McMullan’s leg, but the Northwestern wrestler showed off his flexibility and got into a scramble situation where he was able to come out on top for the score and the win. McMullan was the lone victor for the Wildcats.

Head coach Tom Brands was pretty happy with his wrestlers’ performance, and now the Hawkeyes look forward to their next big matchup with the #1 ranked dual team the Minnesota Gophers. The dual will be in Minnesota next Saturday, January 31st.

One thought on “Hawkeyes use a pair of upsets to fuel big win over Northwestern : 38-3”