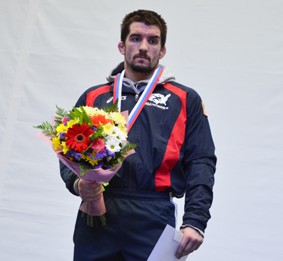 Well it was a mixed results weekend for the Hawkeye Wrestling Club athletes, as yesterday Matt McDonough and Tony Ramos combined to go 0-3 at 57 KG at what is considered the toughest tournament outside of the world championships.

65 KG Brent Metcalf changed the HWC fortunes this morning, when he stormed through his bracket picking up two technical falls and only surrendering four points in his first four matches to make the finals for the second time in his career. His run would end in the finals though, when he lost 8-6 to Russia’s Bekbulatov, claiming silver medal.

Only 11 Americans have won the tournament, but Metcalf’s two silver medal finishes is almost as rare as the champions. Metcalf, along with Andrew Howe (who made the finals Friday), are the only two Americans to make the finals of this tournament since 2010.

HWC wrestler Phil Keddy has yet to compete at 86 KG, and will wrestle tonight/tomorrow.

The HWC crew (along with some former Cyclones) will now head to France for the Paris Grand Prix for their next event.