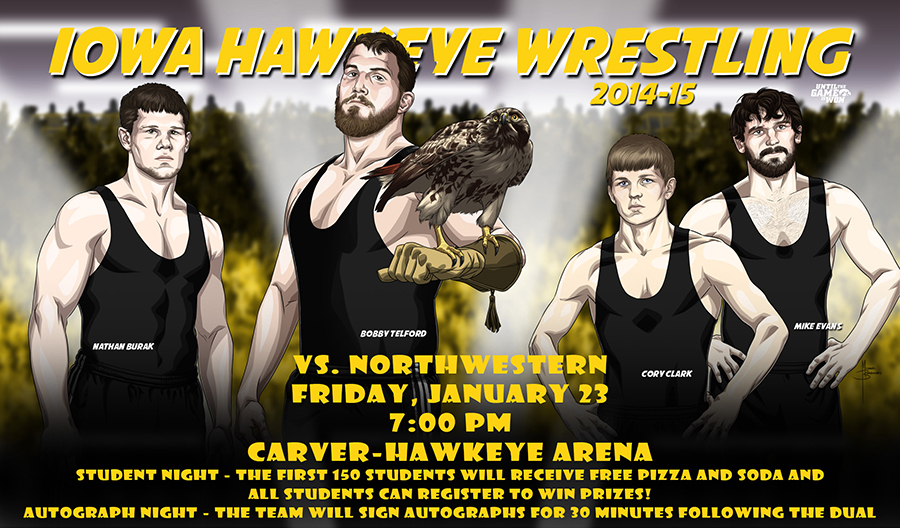 The University of Iowa wrestling team will host the No. 22 Northwestern Wilcats on Friday at 7 P.M inside Carver-Hawkeye Arena. The Hawkeyes are favored in eight weight Friday and will look to continue their winning ways in this series. According to Hawkeyesports.com, Iowa leads the all-time series, 69-7. The Hawkeyes have won 19 straight at home against the Wildcats since Northwestern last won, 25-8, in 1967.

Friday night is student night and the first 150 students will receive free pizza and soda and all students can register to win prizes. Friday will also be an autograph night where fans can receive autographs for thirty minutes after the dual.

The highlight matches of the night will be No. 3 Brandon Sorensen taking on No. 1 Jason Tsirtsis, defending NCAA Champion and No. 1 Bobby Telford for No. 4 Mike McMullan. These two matches are worth the price of admission.

Last year Cory Clark opened this dual up with a major dec. over Garrison White 10-1. Thomas Gilman comes into Friday with a 18-1 overall record and will look at get the Hawkeyes off to a similar start if we start at 125 pounds. Gilman leads the team with nine dual wins on the season and will look to open up against White Friday.

Moving on to 133 pounds Cory Clark will face Dominic Malone whom Ramos pinned last year. Clark has seven falls on the season which is second behind Bobby Telford. Cory Clark will look to bounce back from his loss from No. 5 Zane Richards from Illinois last Friday.

Josh Dziewa has won two straight against ranked opponents and needs to come out Friday owning this weight class. Josh Dziewa will set the tone for Brandon Sorensen and the last thing the Hawkeyes need is a quite Carver-Hawkeye Arena for that matchup.

Brandon Sorensen has won six straight, including three against ranked opponents. Brandon Sorensen also has the most wins and major decisions on the team. Needless to say he is one of the hottest wrestlers in the country. Can he knock off another highly ranked wrestler Friday? Jason Tsirtsis is the defending NCAA champion and is carrying at 40 match win streak.

The next matchup between Michael Kelly (16-3) and Ben Sullivan (5-9) will lead us into the return of Nick Moore. Nick Moore sat out the duals between Illinois and Oklahoma State and Tom Brands said in his presser that we will see Nick Moore on the mat Friday. He will be wrestling the No. 6 wrestler in the country Pierce Harger. Last year Moore controlled the match in this dual and defeated Harger 7-3. Recently though Harger upset Nick Moore at the Midlands by an 8-5 decision. This arguably could be one of the highlight matches of the night.

Mike Evans took a forfeit last year against Northwestern and it looks like that will happen again Friday. Fan favorite Sammy Brooks will take on redshirt freshman Mitch Sliga at 184 pounds. Look for Brooks to keep those Carver-Hawkeyes fans on their feet for our next ranked matchup at 197 pounds.

No. 4 Nathan Burak will take on #13 Alex Polizzi. These two went down to sudden victory last year with Burak on top 3-1. These two were slated to wrestle on paper as the No.1 and No. 2 seeds at the Midlands but Polizzi was upset by Ruben Franklin in the quarter finals. The rankings are a bit misleading so look for these two to wrestle down to the wire again.

Everything leads up to this matchup and will solidify Telford’s seeding at the B1G tournament in March. These two have wrestled each other six times and it has gone back and forth dating back to their redshirt freshman years. They also have been trading the No. 1 ranking back and forth. Last year McMullan defeated Telford when he was ranked No.1 and recently Telford defeated No.1 McMullan in the 2014 Midlands finals. Hold on for a fun finish at Carver-Hawkeye Arena Friday night!