Hawkeyes get win over Ohio State – Burak is back 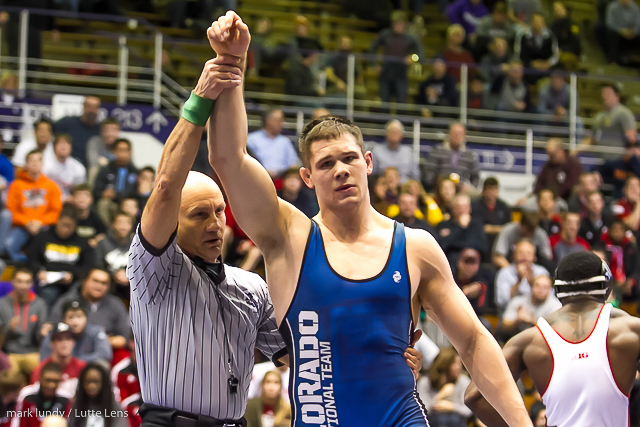 It wasn’t pretty, but the Iowa Hawkeyes will be coming home from Columbus with a 18-14 dual victory, the second of the weekend.

Iowa and Ohio State opened the dual at 125 pound where fans got to see a top 10 matchup between Thomas Gilman and Nathan Tomasello. Gilman held the advantage when the pair had met in freestyle and he continued his dominance with a 2-1 OT win.

Gilman and Tomasello traded escapes in the first three periods and were unable to add anything in the first sudden victory period. Going into the ride outs, Gilman got out in :05 seconds, and then was able to ride Tomasello the entire period to give Iowa it’s first team lead of the day 3-0. It’s pretty clear to see that these two wrestlers are close to evenly matched, and fans should expect quite a few battles between these two over the next two and a half years (maybe more depending on freestyle careers).

Up next was #4 ranked Cory Clark for the Hawkeyes against #9 Johnni DiJulius at 133. Clark had the night off on Friday against Rutgers, but the extra rest wouldn’t be enough for Clark to have the advantage. Clark gave up two takedowns and a technical violation to dig himself into an early hole 5-1 in the first period. Clark was able to ride most of the second period and add a takedown in the third, but in the end he fell victim to the upset 7-5. The win for Ohio State was the first of many swing matches they needed to pickup to pull the team upset over the #2 ranked Hawkeyes.

At 141 Ohio State’s Logan Stieber was business as usual as he picked up a second period technical fall over Iowa senior Josh Dziewa. The win for Ohio State allowed them to take a 8-3 team lead with seven matches to go.

149 Iowa got back on track by picking up an upset of their own when #10 Brandon Sorensen defeated #5 Hunter Stieber. Sorensen was down 5-2 going into the third period and that’s when he changed the tune of the match. After a third period escape, Sorensen picked up three straight takedowns to give Iowa three big team points and a swing match of their own.

Sorensen has had a phenomenal week, taking third at the Midlands championships which included a win over All-American Richard Durso. This weekend he then added a major decision at Rutgers and an upset over a top five wrestler and is clearly one of the bright spots in the Hawkeye lineup right now.

Senior Mike Kelly went at 157 for Iowa with a chance to take the team lead from 8-6 in favor of Ohio State, and put Iowa back on top. Kelly gave up a first period takedown and that was really most of the action in the match. With the match winding down Kelly hit a desperation headlock and missed so he was taken down for a second time and the final score was 5-2. Ohio State had a five point team lead heading into the break.

Nick Moore at 165 then stepped on to the match for his important swing match against Ohio State freshman sensation Bo Jordan. Jordan rocked a pretty sweet mullet, but what really proved how deadly he was his first period dominance. Two takedowns, three near fall points, and almost two minutes of riding time put Moore down 7-1 and he was never able to come back. Jordan won the match 9-2 and Ohio State was up 14-6 over the Hawkeyes.

But that would be the last match Ohio State would win, as senior Mike Evans started the upperweights off with a 5-2 win over Mark Martin and start to slowly chip away at the lead. Sammy Brooks then came out at 184 and won a tight match over Kenny Courts to put Iowa down 14-12 with two matches remaining.

It was at 197 we finally got to see Nathan Burak take his redshirt off (metaphorically) and go out against another super freshman Kyle Snyder. Burak and Snyder ended the first period scoreless, with both wrestler getting in deep on single leg attacks, but both were unable to finish. Before the start of the second, Snyder took an injury time which may have cost him the match.

Taking injury time at the end of the first period allows your opponent to have the option to pick up, down, neutral in both the second and the third period. Burak used that to his advantage to pick up a pair of escapes and after riding time was factored in he came out victorious 2-1, and gave Iowa the team lead back 15-14.

The final bout of the night was Bobby Telford taking on #10 Nick Tavanello. Telford secured a 4-0 win and with that Iowa would be ending their road trip with the final score 18-14 Iowa.

Head coach Tom Brands had some thoughts after the dual, “This team better score some first period takedowns. You look at where we’re at and what our ability is, and what I know it is, and what those 6,000 people out there saw. They’re not seeing a team that can attack very well in that first period.”

Brands also said that Burak was feeling better which helped them make the decision to pull the redshirt today. As for is the 149 spot locked up? Brands acknowledged that Sorensen has been looking good, but as far as it being solidified or locked up, “That’s a big win, and what you do in his position is just keep moving forward. So does that cement him or solidify him? That’s a big win for him, but lets keep it going. That’s important.”

Iowa will continue to be road warriors as next weekend they will travel to Stillwater, Oklahoma where they will face #8 Oklahoma State.