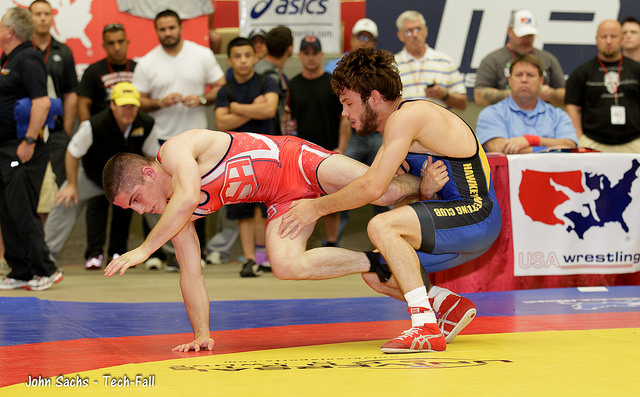 The Iowa Hawkeyes will continue their road trip this weekend as they will be heading to Columbus, Ohio to face the Ohio State Buckeyes. Coming off a Midlands team championship, and a dual victory over Rutgers, the Hawkeyes will look to push their undefeated dual record to 7-0 on the year.

The Buckeyes will be the stiffest test the Hawkeyes have faced this dual season as they boast a ranked wrestler at each weight class. The Buckeyes are led by senior and three time NCAA champion Logan Stieber (141) who has yet to drop a match to a Hawkeye in his career. His opponent this year will be senior Josh Dziewa, who is coming off an upset to Anthony Ashnault Friday.

One of the most anticipated matchups will be the 125 pound match, as Iowa’s Thomas Gilman will take on redshirt freshman Nathan Tomasello. Gilman and Tomasello have met a few times over the last two years, in freestyle, with Gilman holding the advantage. Most recently Gilman defeated Tomasello 8-4 and 3-2 in the Junior World Team finals to clinch his spot on the world team. While freestyle success doesn’t translate perfectly to folkstyle success, Gilman should still be the (slight) favorite in this match.

Going down the line, the next matchup should be a top ten matchup between Midlands champion Cory Clark and Jonnni DiJulius at 133. While the pair have never met in college, this is a match that could be one of the deciding swing matches in the dual.

The Hawkeyes should be favored heavily at 174 and 285 in their seniors Mike Evans and Bobby Telford respectively. Iowa will also be favored at 197 if Midlands champion Nathan Burak does indeed go for the Hawkeyes. If it is Kris Klapprodt who ends up getting the nod at 197, the Buckeyes super freshman Kyle Snyder would be come the favorite to win this weight. Iowa should also be favored at 184 with sophomore Sammy Brooks will go up against Kenny Courts in what will be a top 12 matchup.

A couple of interesting story lines will be at 149 and 165 where both teams are dealing with uncertainty. At 165 it will be Nick Moore for the Hawkeyes, but Ohio State has been without top ten freshman Bo Jordan for most of the season. Jordan is expected to be back for this dual and a Moore-Jordan match would have to be another swing match that will have heavy implications on the dual outcome. If Ohio State rolls out backup Justin Kresevic, Moore should become the favorite to win.

At 149 we know that Ohio State’s two time All-American Hunter Stieber has been dealing with injuries early this season. If backup Randy Languis goes for Ohio State, Iowa should be favored. Brandon Sorensen appears to be the man at this weight for this weekend and if he wrestles like he did against Rutgers (or even against Durso in the consolation semi’s at Midlands) watch out. I expect Sorensen to contend in his match no matter who Ohio State starts.

The final weight is 157 where Iowa will most likely use Mike Kelly, who picked up a huge win over returning All-American Anthony Perrotti of Rutgers, or Logan Thomsen. Kelly will most definitely be in his match, but Ohio State’s Josh Demas  will still be considered the favorite. If Kelly is to win his second upset this weekend, he will need to do so by eliminating what makes Demas so good, his speed. If Kelly is able to dictate the pace of the match in his way, he has a great opportunity to come out on top.