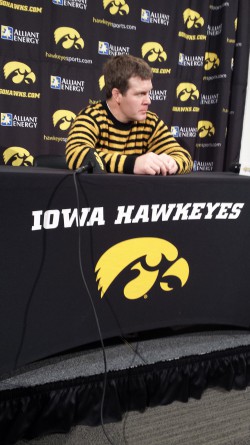 This morning an article popped up on my Twitter feed, and while it has long been expected/rumored, this is the first I am seeing of anything concrete: Broc Berge is leaving the University of Iowa and heading back to Minnesota.

Berge came to Iowa the #38 overall recruit in his class and was considered one of the best 197 recruits available that year. Last year during his redshirt season for Iowa, Berge was 9-7, with a 0-3 record against D1 opponents.

“It wasn’t the right fit,” he said (from the article). “I was there for a year and I stayed overt he summer. I was just never comfortable down there. And wrestling wasn’t going as well as I wanted it to.”

With Berge now officially out of the picture, it opens up a few questions as to what the Iowa Hawkeyes will do with their 197 situation.

Currently the Iowa Hawkeye roster has a pair of junior 197 wrestlers listed, Nathan Burak and Kris Klapprodt. This year we have also seen sophomore Alex Meyer wrestle up from 174, but we won’t really count him as a 197 future option as he is the heir apparent at 174 once Evans graduates. Of the two listed Burak is the only one that still has the redshirt option open, but he is also the best 197 on the roster.

Burak, who was an All-American at 197 last year, would give Iowa its best chance at a NCAA team title this season, but to this point he has been held out of being an official starter for Iowa. A person could speculate that it isn’t because of the future depth situation – I mean we are talking several years down the road, and I don’t think Brands would make a decision to redshirt a guy soley because he is worried who will be his starter two seasons from now.

If Burak it battling with an injury (again speculation, take with a grain of salt) it would seem like a no brainer to redshirt him and roll with the Klapprodt/Meyer duo they have been putting out on the mat to this point. Thankfully with the Midland tournament next weekend, we should get a good look at Nathan Burak and know for ourselves if he is at least healthy enough to go for the season.

While we are on the subject for 197, if we do look down the road, we can start to see some possible scenarios for what Iowa can do. If Burak has to redshirt and is around two years from now, great! If not, it doesn’t look so bleak.

The first option Iowa could do is bump Sammy Brooks (now a senior in this hypothetical) from 184. Sammy certainly has the frame to add some muscle, so it’s reasonable he could go up a few years from now. There is also Mitch Bowman who is listed as a 184 on the roster, and incoming top 100 recruit Cash Wilcke is already wrestling high school at 195, so it seems he is destined to be 197.

The main point from the last paragraph is that Iowa has a few options already on the roster, and it appears they have a recruit with potential to fill the future “hole”. A case could be made for either way: if Burak needs to redshirt, okay it looks like Iowa will have a great 197 option two years from now; if not, Iowa is still okay, they can make their run at a NCAA title this year, and still have a guy to step in once Klapprodt and Burak graduate.

The final point to make (and the reason I saved it for last is because it’s fairly insignificant), but having Broc on the roster would have hopefully made an in-road to his younger brother Brady, who is a top 10/15 recruit in his class. While Broc’s college decision might not have been the end-all-be-all for when Brady makes his decision, it certainly isn’t a point in Iowa’s favor that Broc felt he didn’t fit in at Iowa. There are numerous examples of younger brothers going to a different from their elder (recently Jason and Alex Tsirtsis, and Logan and Max Thomsen), so like I said, nothing to get too worked up over.