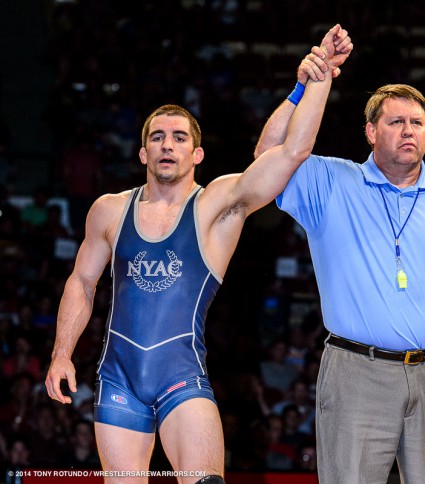 Imagine your a salesman and you just landed a huge client from a major competitor. You get back to your office and your boss says, “Nice work!”, and you just say, “I didn’t sell them enough.”

Or maybe your a student and you get your test back from your teacher and see you got 100%, but you say aloud, “Man, I can’t believe I got the extra credit questions wrong!”

I’m trying to find a real life equivalent for what Brent Metcalf just did on Saturday night, as he put together 9 straight points to win 9-2 over Franklin Gomez (FloPro required). Sure, the performance wasn’t “perfect”, but aside from an arm drag early in that match, Metcalf completely controlled Gomez, in a fashion that is impressive to most who watched.

But that’s one of the things that makes Metcalf great, he’s always looking to get better and he strives for perfection (although even if he did achieve perfection he would probably tell how he could improve). Metcalf’s post match interview with Bader summed up his thoughts prtty well, “Good finish, you know the score was 9-2, so it was a good match, especially what it translates to. Which is how are you going to win gold medals? You have to score early and you have to score on top. And those are two things I didn’t do.”

Even though Gomez earned his world silver medal at 60 KG, this should go down as a solid win for Metcalf and should at least go down as a great experience although Metcalf wasn’t thrilled with how the match went. “When you begin to widen the gap, it begins to topple on itself. Because now that guy is down by seven points. So he has two options: do what you saw out there, or try to win the match.”

Jon Reader was able to score some revenge on his former wrestling club teammate Deron Winn by besting him 6-2 in the co-main event. Winn started the match where he left off their last meeting (at the Bill Farrell tournament) by scoring an early takedown in the first period. Reader then picked up back-to-back takedowns to take a 4-2 lead and he would never relinquish it. Through the second period and most of the third the score never changed until Winn took a late desperation shot, and Reader capitalized making the final 6-2 in his favor. (Reader’s post match thoughts here)

One thought on “Brent Metcalf dominates the FPL”