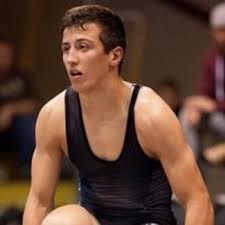 This weekend some of the greatest high school talent will be traveling to the Walsh-Ironman wrestling tournament in Ohio. Some of the teams that will be vying for a team title are: #2 Oak Park River Forest – IL, #4 St. Paris-Graham – OH, #10 Franklin Regional – PA, and of course #1 Blair Academy – NJ. If you are not up to date on your high school power houses, the first three schools listed in that group each contain a recruit that has already given their verbal to the University of Iowa. Today we will examine Franklin Regional’s (and newly #1 ranked at his weight) Mike Kemerer, who will be the favorite to win the 145 Ironman title.

Mike Kemerer, who signed his letter of intent for the Hawkeyes just a few weeks ago, is coming off a very impressive Super 32 preseason tournament performance in which he made the finals for his fourth consecutive year, and captured his second Super 32 title. Kemerer expressed his thoughts on the Super 32 victory, “Like any other tournament, I think I took away things that I did well on and things on which I needed to improve.The best part about competing at a preseason tournament is that it helps you make the necessary adjustments in the last month before the season starts.”

Kemerer earned his title over Iowa senior Max Thomsen. Thomsen recently defeated Fredy Stroker to claim Iowa’s #1 Pound-for-pound spot, “I got to see some tough competition, and I believe that you can self-evaluate best (when going up) against tough opponents. It is motivation for me to keep improving so that I can win tournaments as tough as (the Super 32) by an even greater margin down the line.” Kemerer continued.

Even though Kemerer won his title in fairly dominating fashion, he knows that the work to become a champion doesn’t stop there, “I think there were some technical aspects on which I could improve, as well as some mental aspects. After talking with my coaches, I have been able to go back and tighten up some areas of my game that needed improving. From the mental side, it was more just learning to keep relaxed while wrestling at a high pace.”

Fans may be a bit disappointed in the 145 bracket, as it will be without the #1 145 high school wrestler in the country, Vincenzo Joseph (who also happens to be wrestling clubmate of Kemerer in the Young Guns), but that doesn’t mean the field will be without big names. Guys like #4 Larry Early, #12 Brent Moore, #14 Kevin Budock, and #15 Zander Wick will also be in the Ironman attendance. “Knowing the competitors that I will have at the Ironman definitely has motivated me to work harder in the practice room. I think looking into the names of your opponents can either help you or hurt you. The thought that a future opponent of mine could be out working me makes me work that much harder every day.” Kemerer said, “However, you never want to think too deeply into it and start to wrestle their style rather than your own.”

Even though Joseph will not be at 145, he will still be in the tournament field, but at 152. With Stroker going down to Thomsen this last weekend, it officially opened the door for Kemerer to take on the #1 overall 145 spot (Joseph is now ranked at 152). Fans need not worry that the Kemerer and Joseph will not be facing each other this weekend, as they could still see each other at Powerade, districts, and the state finals.

“We obviously have a lot of history wrestling against each other over the years whether it be at practice or in a match.” Kemerer said of his matchup inevitable matchup with Joseph, “We know each other’s tendencies very well, and there is a lot of respect for each other when we wrestle. The key to having success and winning would be to open up my attacks and not wrestle as conservatively as many people do when they wrestle a familiar opponent. Ultimately, it will come down to taking risks and stepping out of my comfort zone.”

Even without Joseph in the fold at 145, this weight is shaping up to be one of the most outstanding brackets at Ironman. Winning the Ironman title is something that Kemerer is eager to check off of his list, “I am most excited for the opportunity to compete for my first Ironman title. It is right up there next to Fargo and the PA state tournament as one of the events that I want to win the most. Coming up short two years in a row has not been fun, and I believe that I am fully prepared to take home the gold this year.”

Another great thing about Kemerer is that he understands that it’s not just about winning the individual title, as he told me that he firmly expects Franklin Regional to be in the thick of the team race, “I believe that we have the people there to (win a team title). I am confident that we train harder than any other team in the country, prep or private school. Ultimately, it is going to come down to our “big guns” dominating the top guys while our other wrestlers score a couple of upsets. We feel like we have some areas that need work as a team, but overall there is no reason that we cannot turn some heads and win that title. It would certainly be huge for the school as well as for the community.”

The Ironman tournament takes place this weekend starting Friday 12/12 and goes through Saturday 12/13. If you have a FloPro subscription, you can catch all of the Ironman action, including Turk’s matches.