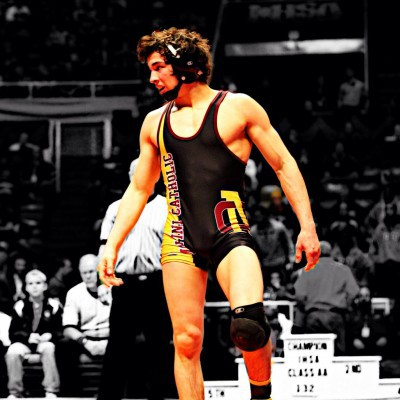 This weekend some of the greatest high school talent will be traveling to the Walsh-Ironman wrestling tournament in Ohio. Some of the teams that will be vying for a team title are: #2 Oak Park River Forest – IL, #4 St. Paris-Graham – OH, #10 Franklin Regional – PA, and of course #1 Blair Academy – NJ. If you are not up to date on your high school power houses, the first three schools listed in that group each contain a recruit that has already given their verbal to the University of Iowa. Next, we will look into senior Hawkeye commit and #11 ranked Vince Turk.

This weight features a potential #1 vs. #2 at this weight in Princeton bound Matt Kolodzik and Ohio State bound Ke-Shawn Hayes. Of course that’s just if Hayes can make the finals, as he will most likely need to go through another top five nationally ranked wrestler, #5 Davion Jefferies.

Turk announced his commitment to the university of Iowa in the fall, but in the end the pull of one of the nations top programs and wrestling in the Big Ten was too much and Turk gave his commitment to Tom Brands.

Turk has also put together a pretty good preseason resume, winning the Conflict at Carver (and earning the tournament’s Outstanding Wrestler) and taking home third place honors at Preseason Nationals.

This weekend will prove to be a much steeper challenge for Turk as his potential quarterfinals opponent (if we take seeds all the way through) would be #18 Richard Screptock (Oregon Clay, OH) who is a state champion and former cadet freestyle All-American. The point in Turk’s favor in this matchup is that the rankings would favor the future Hawk, as he checks in seven spots higher.

Assuming Turk wins a hard fought quarterfinal it would then most likely setup a showdown between him and a top ten recruit and Super 32 champion, Matt Kolodzik.

Last season, Turk brought home 7th place honors at the Ironman tournament, picking up losses from future teammate Mike Kemerer (10-4) and nationally ranked prep from St. Paris-Graham, Kyle Lawson (3-1). The win by Lawson was significant because on the frontside Turk had defeated Lawson 4-2 in the second round of the tournament.

The Ironman tournament takes place this weekend starting Friday 12/12 and goes through Saturday 12/13. If you have a FloPro subscription, you can catch all of the Ironman action, including Turk’s matches.