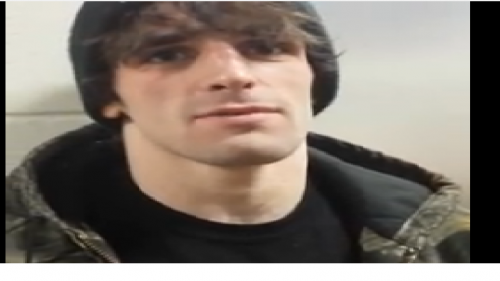 Q: (Talking about a takedown Evans had, where he had to drag the wrestler from the edge back onto the mat to finish)

Mike Evans: Yeah, you got to pick it up and you got to drag them back to the center and you have to give yourself enough space to finish. You know that they are going to kick away, roll, do all sorts of stuff. You see guys like Tony Ramos a couple years ago he does a good job of doing it and it’s what you HAVE to do to finish.

Q: That (takedown) really seemed to fire up the crowd, is that something you feed off of when you hear the crowd erupt?

Evans: Yeah man, it gets your blood boiling a little bit, it’s what you wrestle for. That buzz.

Q: That third period it was a pretty similar sequence, he’s hanging on your back going for a piggy back ride and you managed to flip him over. (For context, Evans hit a stand up and Nash just hung on to Evans back and made no move to return him, so Evans flipped him off his back to get out)

Evans: Yeah, I don’t really know what to say. He got really high and I had the arm and he went over.

Q: Talk about how your season is going so far. Are you feeling comfortable, feeling healthy, feeling strong?

Evans: That was what we needed to do. It was a good job shutting that team out. I think we left a few points out there. A major should have been a tech, and we didn’t have any falls. That’s a bummer. Guys hanging on to our elbows, stuff like that. They are going out there to hang on and we have to fix that mistake.

Q: When you have guys out there that are just trying to hang on, did you show some of the underclassmen a few ways to get out of that?

Evans: When guys want to hang on you ramp up your pace. Simple as that.

Q: Seven takedowns tonight, is that the kind of performance that you wanted to put out there tonight?

Evans: (Math ensues) Putting a lot of points on the board is what you got to do, it’s what your out there to do.

Q: Is the stache coming back for Midlands?

Evans: I’m debating whether it’s Midlands or if it’s after Midlands. One or the other. Trust me, I’ve thought about it already.