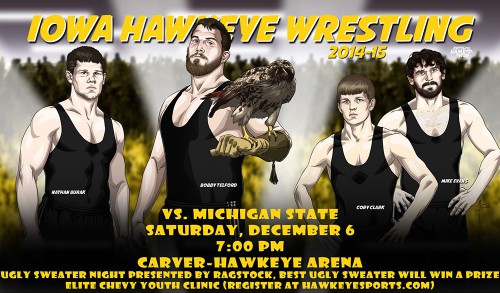 The second ranked Hawkeyes will open up Big Ten dual season against the Michigan State Spartans this Saturday night, and they will also be bringing in a perfect 4-0 record and haven’t lost a Big Ten opener since 1997-1998 (Penn State). The Spartans have a 2-3 record, with one of those losses coming at the hands of conference for Minnesota, and another by Iowa State, who Iowa recently defeated 28-8.

So when the Spartans roll into town on Saturday night (they’ll be fresh off a Friday night dual against Northern Illinois too) there are a couple matches to watch for, but brace yourself not too many.

The highlight of the dual will most likely take place at 133 where #4 Cory Clark will look to defend his undefeated record against #12 ranked Javier Gasca. Gasca defeated Earl Hall when Iowa State came to town, which would cement him as one of the more dangerous wrestlers in this weight class. I say that because the farther you get from the top five, the faster the talent level at this weight levels off. There aren’t too many stars at this weight (yet) and Gasca-Clark would be a good matchup no matter where the setting.

The second most intriguing matchup would be at 184 where #9 Sammy Brooks will continue to try and roll along (mullet-less) against John Rizqalla. Rizqalla has been one of the better Michigan State wrestlers over the past few years so while it may look like a ranked vs an unranked battle, this could have the makings of a tighter match.

The rest I would predict that the Hawkeys will roll in typical fashion that we have come to expect from most of the starters at each of the weights. Josh Dziewa at 141 could face Garth Yenter a 133 backup who beat Iowa State’s John Meeks. At 149 the question will pop up who will start this match? Will it be Brandon Sorensen who is now ranked and defeated Gabe Moreno last week, or will Brody Grothus get another shot in the dual before Midlands.

Outside of the two highlighted matches I would think that Mike Kelly at 157 and Kris Klapprodt (assuming he is the starter at 197 again for the possibly injured Burak) are the biggest threats to drop their matches, but I still feel confident in each of those Hawkeyes to this point.
#2 Iowa Hawkeyes 4-0 (0-0)