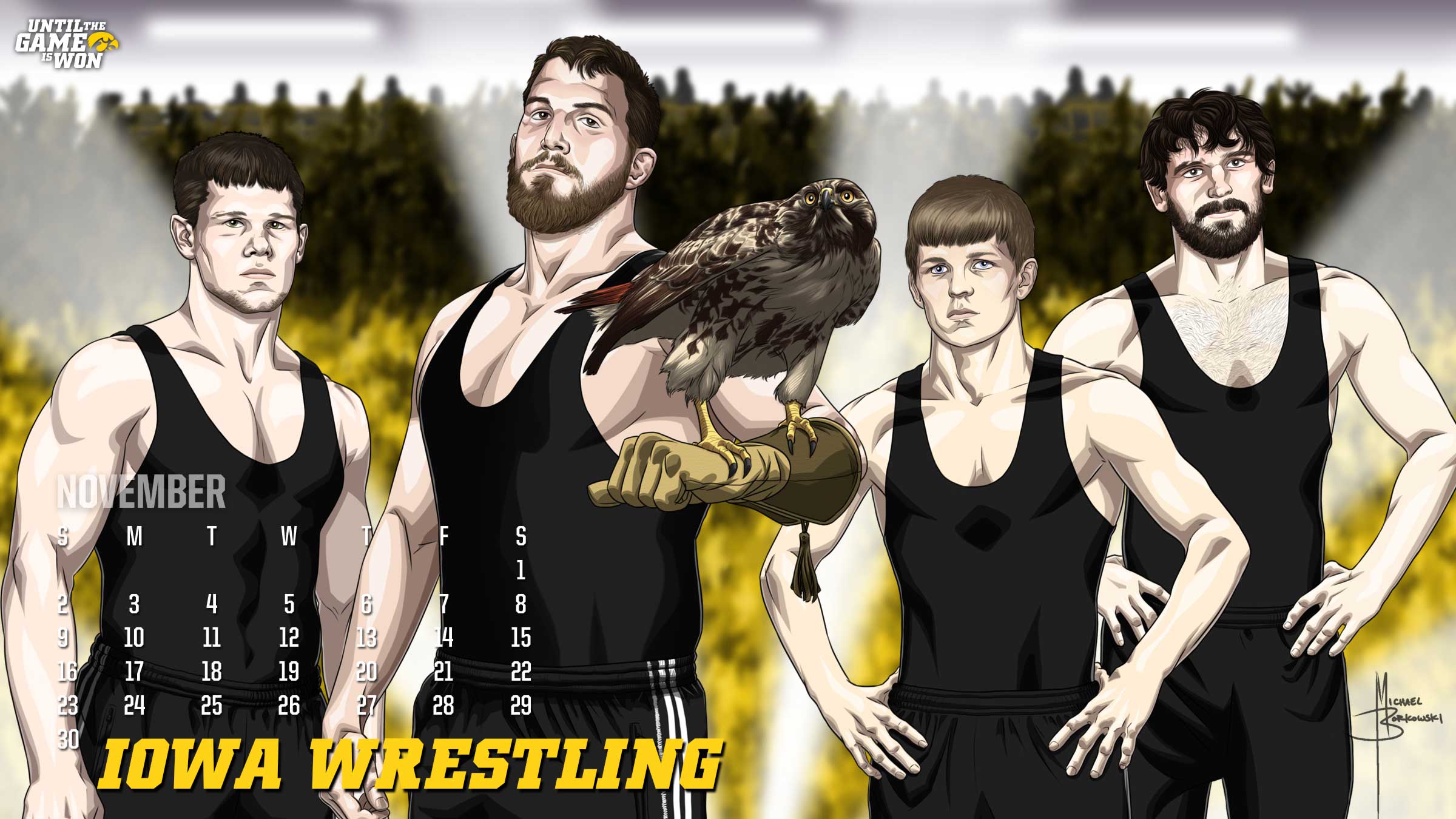 Thomas Gilman spent a lot of time at 125lbs last night so this weight class is not new to him and he is ready to step into the role as the Hawkeyes 125 pounder. One thing I have taken from Gilman’s off season is he is getting more aggressive and on the attack a lot more. Gilman was able to bring home a bronze medal from Croatia back in August for Team USA at 55 KGs. Earning a spot on the Junior World Team was a great accomplishment but he has a lot to prove this year. Having to take a seat to Clark last year left him without a shot at going to the NCAA tournament. Out of all of the great Hawkeye wrestlers on the roster this year, Gilman is the one we should all look out for to make some noise in March. Will the Gilman and Clark duo be better than McDonough/Ramos?

Considering the depth at this weight last year, Clark had a very solid freshman year. Gilman finished this past season with a 15-3 record (which included wins over AAs #1 Delgado, #6 Peters (Gilman is 3-0 vs. Peters in his career) #7 Cruz and losses to #3 Megaludis, #5 Clark and non-qualifier Brancale).  An intriguing name is Waters (MIZZ), who was redshirted this past season and wrestled 133 unattached. He was pretty successful wrestling 125 his freshman through junior seasons (3-time NQ, 1-time AA losing to Garrett in the 2013 NCAA 3rd place match), but he struggled a bit wrestling up a weight in 2014 and ended up with a 4-4 record (W over #6 Beckman, Ls to #1 Ramos, #2 Graff, #6 Beckman and Willers (UNI Backup)). If Megaludis was not redshirting I would say him and Delgado would be the favorites to meet back up in the finals. Now that he is redshirting this weight class has everyone gunning for Delgado.

Cory went to the Brands in June/July and said he would like to make the move to 133, making room for both he and Thomas Gilman in the lineup.  This is not an unfamiliar weight to Clark as he competed the last half of his redshirt year at 133 winning both the Roger Denker and Grand View Open (5 falls, 2 MD’s in 8 matches).  I look for Clark to be able to wrestle full 7 minute matches this year with the pace that we saw early on in his matches at 125.  If this happens I think Cory will be able to put up a lot of bonus points this year with his huge arsenal of offensive weapons.  He mentioned at press day that he feels more comfortable with his weight and the Hawks will need him to have a big year to finish where they want as a team in March. I see this as a wide open weight class this year.  It’s all going to come down to who will bring it when the lights are on.  I think there is a big drop off outside the top ten.   I’m picking Clark to make the finals and bring home the title if he can handle the added weight. The veterans will obviously be at the top but one has to include the young sophomore into the mix for a national title.

Top New Faces:
Nick Dardanes (MINN) like his brother, Nick will be dropping a weight class from the previous season – 7th at 141 in 2013

Josh Dziewa looks to return to the Hawkeye lineup for this second season as a full time starter after he went 27-10 and 2-2 at NCAAs as a junior. Dziewa started his season off pretty strong which included a Midland performance that saw him defeat All-American Rick Durso of Franklin and Marshall twice. Dziewa will face some stiff compeition from sophomore Topher Carton, whom Brands described as “the most improved wrestler from last November”.  Dziewa defeated Carton 4-0 last year, but since the 2013-14 season Carton has been able to dedicate himself to the 141 weight class, after spending time split between 133 and 141 the previous two years. This weight returns three time NCAA champion Logan Stieber (1st), and returning All-Americans Mitchell Port of Edinboro (3rd), Steve Dutton of Michigan (7th), and Nick Dardanes of Minnesota (7th in 2013). This is a weight that Iowa has looked for someone to take up the mantle that Montel Marion built when he was a three time All-Ameircan at this weight. Dziewa was supposed to be that answer, but last season he fell short of the podium. Dziewa has just about every high school accolade you could want, it may just be a matter of him putting together a full season. If he can there is no reason that he can’t put himself in the picture to finish in the top eight, but he will have to had made improvements from last year. We know Brands is happy with the improvement’s Carton has made and after this weekend at the Luther open fans should get a chance to see these two go head-to-head.

Top New Faces:
Hunter Stieber (OHST) will look to enter this weight after being a two time All-American at 141

Oh the beloved 149 pound weight class. Everyone wants to know who will man this spot. The Hawkeyes have a ton of talent at this weight class. Right now it is anyones spot. Sorensen wrestled the first half of the year up at 157, posting a record of 10-3. He dropped down to 149 in time for Midlands and went 14-1 at the lower weight (including wins over Grothus and AA Neibert and a SV loss to Habat). I’m hoping this lineup gets sorted out soon in order to give whoever is going up to 157 time to bulk up. For now, I think Sorensen is the guy and look for him to be an All-American. This weight class has a clear front runner and that is Jason Tsirtsis who is the returning national champion. How will the sophomore handle the pressure? Based off his 4-1 win over top challenger Josh Kindig in the All-Star Classic, Alex is only looking forward to another national championship.

Replacing a four time All-American and NCAA Champion is never easy, but that’s what the Hawkeyes are asking Edwin Cooper or Michael Kelly to do this year. Both guys competed at 149 last year, Kelly for Iowa while Cooper was wrestling at Upper Iowa. The Peacock went 35-4 overall last year and was the NCAA DII runner-up. Kelly had a 10-6 overall record, with a 10-5 mark at 149 pounds and 0-1 at 157. He went 4-4 in conference duals and won the Luther Open last year, but he’s still looking to take that next step forward against the best competition. I think the battle is tight between the two, and would look for them to split time early in the season. I’m leaning towards Cooper for the starting spot, but it would not surprise me if the lights were a little too bright for him come March. Everybody is back at 157 except Derek St. John, who took home 5th last year. Whoever earns the top spot this year for the Hawkeyes should be well experienced against the best though; Iowa wrestles Minnesota and Oklahoma State ruing the regular season, and possible matches with the rest of the Big Ten opponents come at the Big Ten Tournament. This is an uphill climb for the Hawk who goes at 157, but that’s exactly the type of situation that Iowa wrestlers love. Ness and Green look to be the front runners at this weight class.

Going into NCAAs, Moore was behind only Ramos and Clark as the Iowa wrestler I felt most confident in performing at or above his seed. After a fantastic regular season (19-2, Ws over AAs Caldwell, Moreno, Zilverberg and Harger, L to AAs Taylor, Monk) and a runner-up finish at Big 10s, I was very confident that we’d see Moore make the podium. Needless to say, I did not see either a first round loss (albeit to the same wrestler who knocked Nick out of the 2013 tourney, Veltre (BLOOM)) nor a 2-2 record at NCAAs. Fortunately for Moore, this weight loses a lot to graduation with 5 of the 2014 AAs moving on and I expect Moore to AA in his final year as a Hawkeye. Despite the attrition, there are a couple of formidable wrestlers coming into this weight with 2014 157 pound NCAA champ Dieringer expect to move up and super freshman Jordan coming off redshirt and both are formidable opponents with plenty of accolades between them.

I see this as a very top heavy weight after the top 4 there is a considerable drop off in talent.  That said those top 4 will be battle tested by the time March rolls around with all of them wrestling for B1G schools.  These guys have been going back and forth with each other for the last couple years and we should expect nothing less this season.

Brooks will look to step into this weight in a full time starting role, after being a fill in starter last year for All-American Ethen Lofthouse. Brooks did many things that made Iowa fans feel like this weight should have little issue filling the void Lofthouse left. Brands has the same feelings as at media day he mentioned, “At that weight with [Sammy] we are in good hands.” Brooks will be pushed, by Alex Meyer, a Redshirt Soph out of Southeast Polk, for this spot. With the top two guys gone, and only four total All-Americans returning this weight is wide open for a new comer to make a name for themselves. I believe Sammy Brooks can be that wrestler. Last season he picked up impressive wins over Tim Dudley (Nebraska) and Dominic Abounder (Michigan), and also lost matches to eventual All-Americans Jimmy Sheptock and Ophir Bernstein by a combined 3 points. Proof that Brooks was real close to being a top wrestler at this weight last year. I expect Brooks to take a step forward this year and end up an All-American.

As this past season wore on, it seemed as though Burak would have trouble improving on his Round of 12 finish at the 2013 NCAAs. The start of his sophomore year was pushed back due to an undisclosed injury (by all accounts it was a skin infection) and though he showed improvement in his riding skills, his aggressiveness from neutral and willingness to string together shot attempts took a downward turn from what he showed his freshman year. Despite this change, Burak was one of 4 Hawkeyes to place above his seed (#8 Clark – 5th, #3 Ramos – 1st, #11 Burak – 8th, #5 Telford – 4th) and scored a pretty nice upset defeating #6 Perry in the 2nd round. That being said, Burak is going to have his hands full in his quest to move up the ladder in 2015. A ton of talent returns plus Ohio State brings in Kyle Snyder. Does returning NCAA champ J’Den Cox bump up to HWT? He appeared to be a monster at 197, so a move up could be in the cards.

A two-time All-American at Iowa, Bobby Telford is still look for that top spot at the NCAA Tournament. Back healthy from an injury-prone year in 2012-13, he made some progress back last year but didn’t live up to his own expectations. This year I think Telford knows he has to come out aggressive – and he’s done so in the past – but he has to sustain it all the way through a season and against every opponent. Telford is the one guy that I can see taking the “Iowa Style” of wrestling and running all the way through the NCAA Tournament. This should be a dogfight for top honors as there’s a lot of talent returning, including Coon (MICH) who was knocked out in the Round of 12 after holding the top spot in the rankings for much of the year. One item of note: McMullan is attempting to become just the 10th 4x AA ever at HWT (Nelson (MINN) became the 9th this past season). Time for Bobby to shine!