Wrestler of the Week – Cullan Schriever 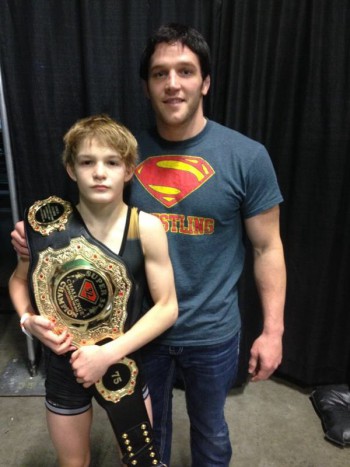 Cullan Schriever is this week’s WoW after he tore through the 75pound middle school bracket at Super 32 in dominating fashion. The Seabolt Academy wrestler opened his tournament with a 6-1 decision, and then he really opened it up in his next two matches scoring a 19-6 major decision and 16-1 technical fall. All of that earned Schriever a shot at the belt against Kellyn March of South Dakota and Schriever won that match too 6-2. At the end of the day Schriever outscored his opponents 47-10 and for that he has earned IA Wrestle’s Wrestler of the Week.

Fredy Stroker had an impressive weekend as well down at the Freakshow in Las Vegas winning the 155 pound title. Stroker opened his finals match with an exciting score as he hit a roll off a whizzer to pick up a quick four points. He never looked back and cruised to a title. Also impressive was that Stroker was up 10 pounds from where he is expected to compete during the high school season.

Gabby Lord-Klein continued her strong start to the season as she won all four of her matches this weekend. The Waldorf senior finished the day with two technical falls and a pair of pins en route to winning the Can/Am Open. Lord-Klein is 13-3 on the season and currently ranked 4th in the WCWA poll.

Carter Happel finished second down at the Freakshow 133 weight class. Happel opened the tournament in dominating fashion, as he recorded three straight falls to reach the quarterfinals. He won his next two matches by a combined score of 8-3, and then lost his finals match to Israel Saavedra of California 5-2.

Max Thomsen had a great tournament in North Carolina as he finished second at the Super 32 145 weight class. Thomsen opened up his tournament with a 9-1 major decision, followed by a pair of lopsided decisions. After an 8-1 decision in the quarterfinals it set up a top 50 class of 2015 showdown between Thomsen and Florida’s Patrico Lugo. Neither wrestler was able to get much of an upperhand during regulation, and Thomsen was able to pull out a win in the tiebreaks. In the finals he lost to four-time Super 32 finalist Mike Kemerer and lost that match 9-4.

Dayton Racer makes his return to the list as he finished runner up at the Super 32 tournament at 152 pounds. Two weeks ago Racer earned WoW honors on IA Wrestle for dominating the GFC at 160, and when we found out he was going to 152 for Super 32 we knew we would be in for a good performance. Racer didn’t disappoint. He opened his tournament with a Fall, and back-to-back shutouts 8-0 and 7-0 wins. He surrendered his first point in the quarterfinals winning that match 7-6, but was back to shutouts as he won his semifinal 2-0. Racer lost his finals match 5-4 in the tiebreaks.

Wrestler of the Week – Joe Colon

Wrestler of the Week – Henry Pohlmeyer

Wrestler of the Week – Dayton Racer