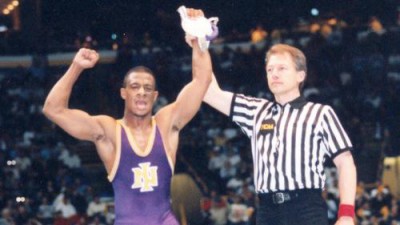 UNI’s first Division I champion since 1963 was inducted into the UNI Hall of Fame last Friday night. Tony Davis, now an assistant at North Carolina State, said that it was, “something special,” to be inducted.

“I never thought that I would ever have the opportunity to be inducted into a hall of fame,” Davis said, “I feel like I have accomplished things that many others probably wouldn’t ever have a chance to, so it’s a special honor. It means a lot.”

Davis was the 2000 NCAA Champion at 149 pounds, compiling a 46-5 record in his two years as a Panther. He beat Adam Tirapelle from Illinois in overtime in the NCAA final to win 5-1. In his first year at UNI, Davis reached the NCAA finals but fell to Iowa’s TJ Williams 5-3. Before transferring to Northern Iowa, Davis was a two-time junior college national champion at Iowa Central Community College. His overall record in college was 111-10.

The 1975 UNI Wrestling squad will also be inducted to the Hall of Fame, but that will take place later this year during the Eastern Michigan dual on Sunday, January 4th and we will have more about that team later in the season.

For the official UNI Hall of Fame release, click here

Below is Davis’ speech after being inducted from last Friday.