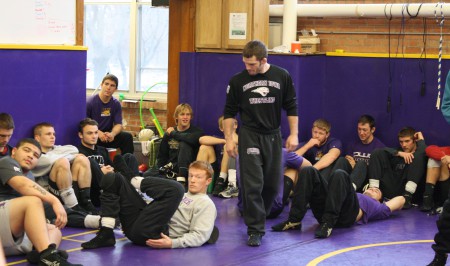 After his first five years at the helm, UNI head wrestling Coach Doug Schwab is still pushing his team to be one of the best.

Schwab’s team is young, there are only 3 seniors on the roster, and he’s waiting for another young gun to burst on to the national scene.

“We lost three seniors who were all-americans, so finding guys to replace that can be tough but that’s what good programs do. That’s what great programs do. We’re trying to build so we’re a perennial power.”

“It’s not going to be one of those things, ‘Where’d UNI go?’ We’re not built for that. When I got here five years ago I don’t know if that’s where expectations were at, but now the guys and the team have those expectations for themselves and the program.”

There are a few guys back in the room from last year ready to build on last year. Dylan Peters, the lone returning All-American, is back at 125. Levi Wolfensperger at 133 is back after too a year away from the starting lineup. He’s about as capable a backup Coach Schwab could ask for; Wolfensperger is a two-time NCAA qualifier from 2012 and 2013. Although he had a loss this past Saturday to freshman Josh Alber at the exhibition matches held in the West Gym, Schwab still looks for Wolfensperger to be the guy at 133.

“He had two pretty good guys in front of him (Colon and Lazor). I’ve seen some good things and I’ve seen some things where he’ll have to raise his level another notch. If anybody’s referring to this weekends match, big deal.(Josh) Alber’s pretty good, but so is Levi, if he wants to be the guy he will be the guy.”

Cooper Moore, the returning NCAA qualifier and MAC champion at 165, is also looking to build on a disappointing March.

“He had a really good summer, there were some things that had to be addressed and he addressed them.” Schwab said, “His weight is so much better than it was last year, he’s got so much energy, I think he’s in a different place mentally too right now. It’s a whole other confidence level. He’s very well equipped this year to be the guy at 65.”

An NCAA qualifier from last year, Cody Caldwell, is bumping up to 184. Cody looks the part of at 184 pounder, bulking up not only his body but his mind over the summer.

It’s going to come down to this thing,” Schwab said as he pointed to his head, “and believing when he’s out there. Because he’s got all the tools, it’s about putting it together when he goes out there and competes. He’s done things at a high level for three years, we’re ready for it (the payoff) to come this year.

The last qualifier from 2014, Blaize Cabell, has progressed quite a bit over the summer, and like Caldwell has gotten more acquainted with his new weight. Bumping up from 197 two years ago, Schwab liked his progression last year and enjoys the offense that Cabell brings.

“You got a guy at heavyweight that is taking more attacks maybe than a 49 pounder or a 57 pounder, and you’re telling me that you can’t take that many attacks? It just raises everybody’s level. I’m excited to see what he’s going to do this season.”

The other weights are almost all up for grabs. A few, 149, 157, and 197, have guys back that were starters last year but did not make the NCAA tournament. They are all looking to build off last year and make the tournament, but Schwab wasn’t ready to name a guy at any of those weights. Tyler Patten was the starter for most of last year at 149, but he’s being challenged by Gunnar Wolfensperger, who started the first four duals, winning three bouts.

At 157 Jarrett Jensen is looking to improve on his 8-14 mark last year. Schwab hinted that Jensen had been injured last season, and it took a lot of courage from the then sophomore to go out and compete. Now in his junior year Jensen has improved a lot during the summer, working on finishing moves and continuing to set a high pace during matches. He’ll be challenged by Zach Witte, who wrestled two duals for the Panthers last season at, going 1-1.

197 is a battle again between Basil Minto and Jared Bartel. Both saw action last year, as Minto was the dual wrestler, but Bartel saw the postseason action. Like a lot of these weights that are up in the air, Schwab is waiting for one guy to stand out.

He also wasn’t saying anything on who would start at 141 and 174, the latter weight having no returning varsity experience. Schwab mentioned three names that are all competing for the spot: Curt Mass, Kyle Lux, and Chase Shedenhelm. 141 has Jake Hodges and Adam Perrin working for the top spot. Again Schwab said that this weekend’s competition would help hammer things out.

The Panthers start their season off this Sunday at the Central Missouri Open in Warrensburg, Missouri.

“It’s been a long training period. This week we finally get to grab a hold of somebody else. We’ve had a good spring, summer and fall, and I know our guys are excited to get back out there and compete. ”

Below are Coach Schwab’s opening remarks to the media, as well as links to additional videos from media day.